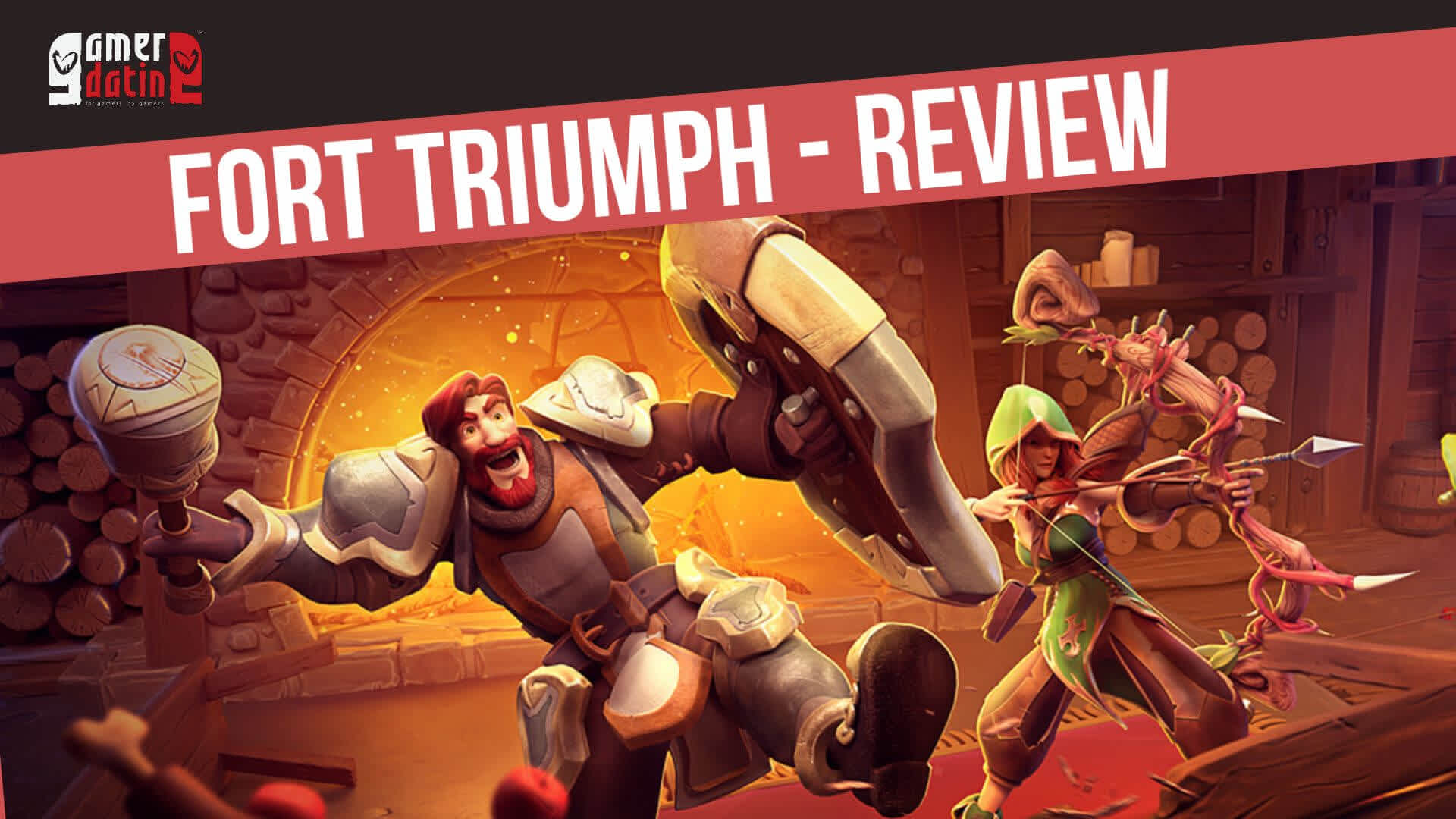 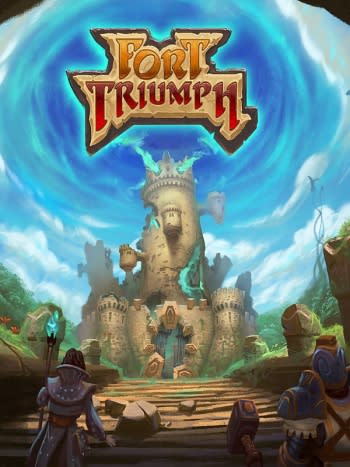 Rarely do I enjoy physics-based gameplay so much.

As 4X, tactics games go, Fort Triumph is a largely enjoyable entry to the genre. Before going into the meat of the review, I want to state something straight away: this is NOT the game for you if you’re interested in a serious, expansive game in the same vein as the XCOM series. If you’re interested in a more light-hearted, but still challenging, take on the genre, this might just be something you want to pick up. 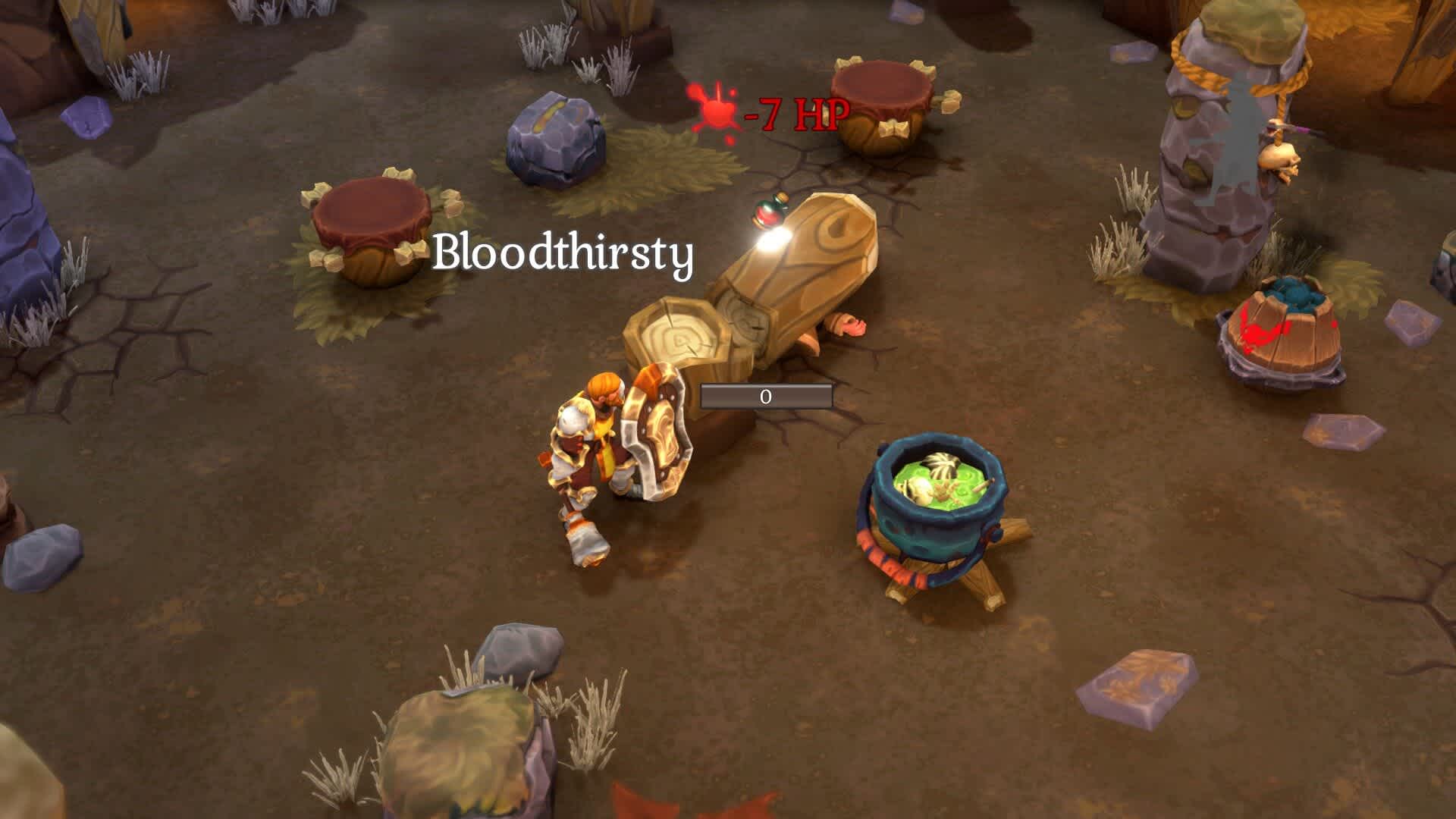 From such simple beginnings…

Visually, Fort Triumph is a treat. Lush, almost cartoony visuals are full of vivid colours and everything, for the most part, is easy to distinguish at a glance. The four main character classes are visually distinct from each other and retain enough traits when spread across the various factions that I rarely struggled to tell what abilities an enemy was likely to have at a glance based on previous experience or my knowledge of what my heroes could do.

Both the overworld map, itself full of points of interest, and the tactical map of the quests are easily understood for the most part (importantly it is VERY easy to tell where cover is, the direction of physics abilities and the areas affected by area-of-effect abilities) and cutscenes are presented as easy-to-read text with character portraits indicating the speaker. Unfortunately, the bright art style can contribute to some confusion. Key information, like which enemy unit is currently highlighted or which square is selected for an attack or movement action, can be lost among the visual clash between bright models, animations and gameplay indicators. On more than a few occasions I found myself selecting the wrong target because I didn’t have exactly the right camera angle to tell what I had selected.

You will randomly be treated to close up murder.

Where the visuals aim for a fantasy comic/cartoon feel, the audio is much more traditional fare: rousing action music and evocative weapon/movement sounds. Nothing really stands out as truly impressive, save for perhaps the unsettling spider movement noise, but nothing was a low point either. The music was good, if not particularly memorable.

The same could also be said for the UI and UX of the game. Obviously, there is little room for innovation within both the UI and UX of this style of game and Fort Triumph uses those who went before to great effect. The left-hand side of the screen shows your units, their health and their remaining Action Points (most abilties cost at least one Action Point), the bottom shows the abilities of the currently selected unit and the right-hand side shows the enemies visible to your heroes.

You can click on a unit card to select it and you can hover over enemy cards to see where that particular enemy is, something that is very useful when combined with the fact that the game shows the ‘to hit’ chance of each enemy when an offensive ability is selected, as well as any effects currently active on the units present on the map. Rather, it WOULD be useful if the red highlight the game applies to the unit whose card you are hovering over were easier to see. As hostile units have a red outline when they are behind cover, or otherwise obscured from the camera, the effect used to show the unit tied to that card is too subtle to easily see and I frequently gave up using it mid-quest and manually selected each enemy in turn to find the one I wanted. I also felt that the controls for selecting and using abilities could have been redesigned: a left-click selects an ability, but a right-click activates it. I found myself right-clicking to cancel an ability too often in the opening hours of the game and accidentally consuming the ability. This is, perhaps, entirely down to how my own brain works though, so your mileage may vary. 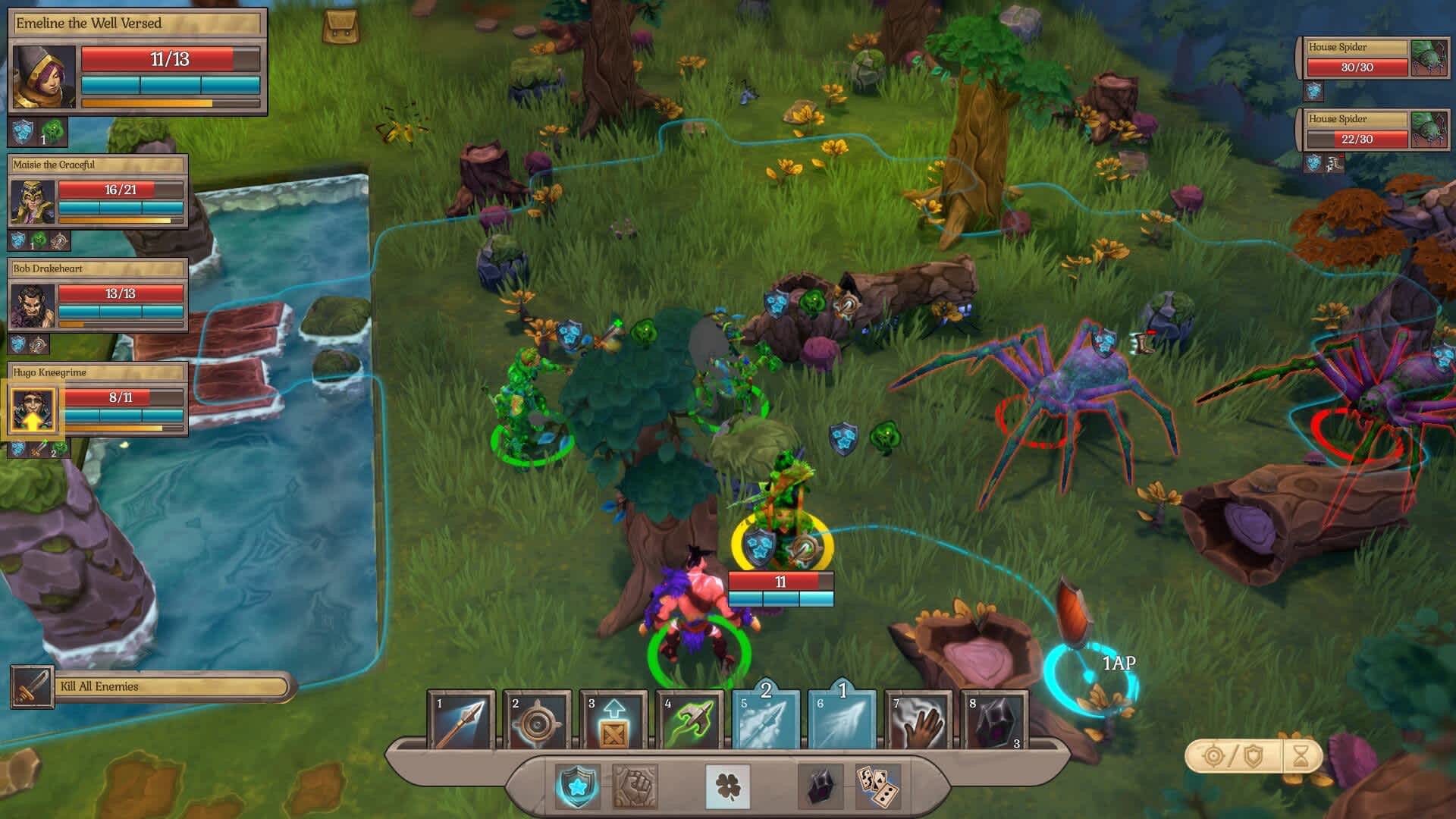 It looks like there is a lot going on here, but it’s easy to pick up on what’s really important.

Not that this really hinders the gameplay in any meaningful way. That is, largely, tried and true 4X, tactics gameplay. A couple of viewers who caught the streams live as I played through the main campaign for this review remarked that it reminded them of the Heroes of Might and Magic series and  a small amount of research revealed that there are similarities. Broadly speaking, the game is split into two distinct portions: the overworld and the quests. The overworld features a large-ish map full of random encounters, decisions to make for rewards and resources, and is played out in a turn-based fashion.

Each ‘turn’ is termed a day and at the start of every week your home base(s) are refilled with new heroes to hire to fill out your adventuring parties (you can have up to three parties of five heroes each). The start of each week also sees the hostile units on the map get stronger. When the player turn is complete, the AI then has a turn in which is claims resources and its own armies/groups move (sometimes absorbing the static units on the map and thus growing stronger). If one of your parties encounters a static unit, one of the enemy’s armies/groups or assaults an opponent’s base, the game switches over to the tactical system described previously. 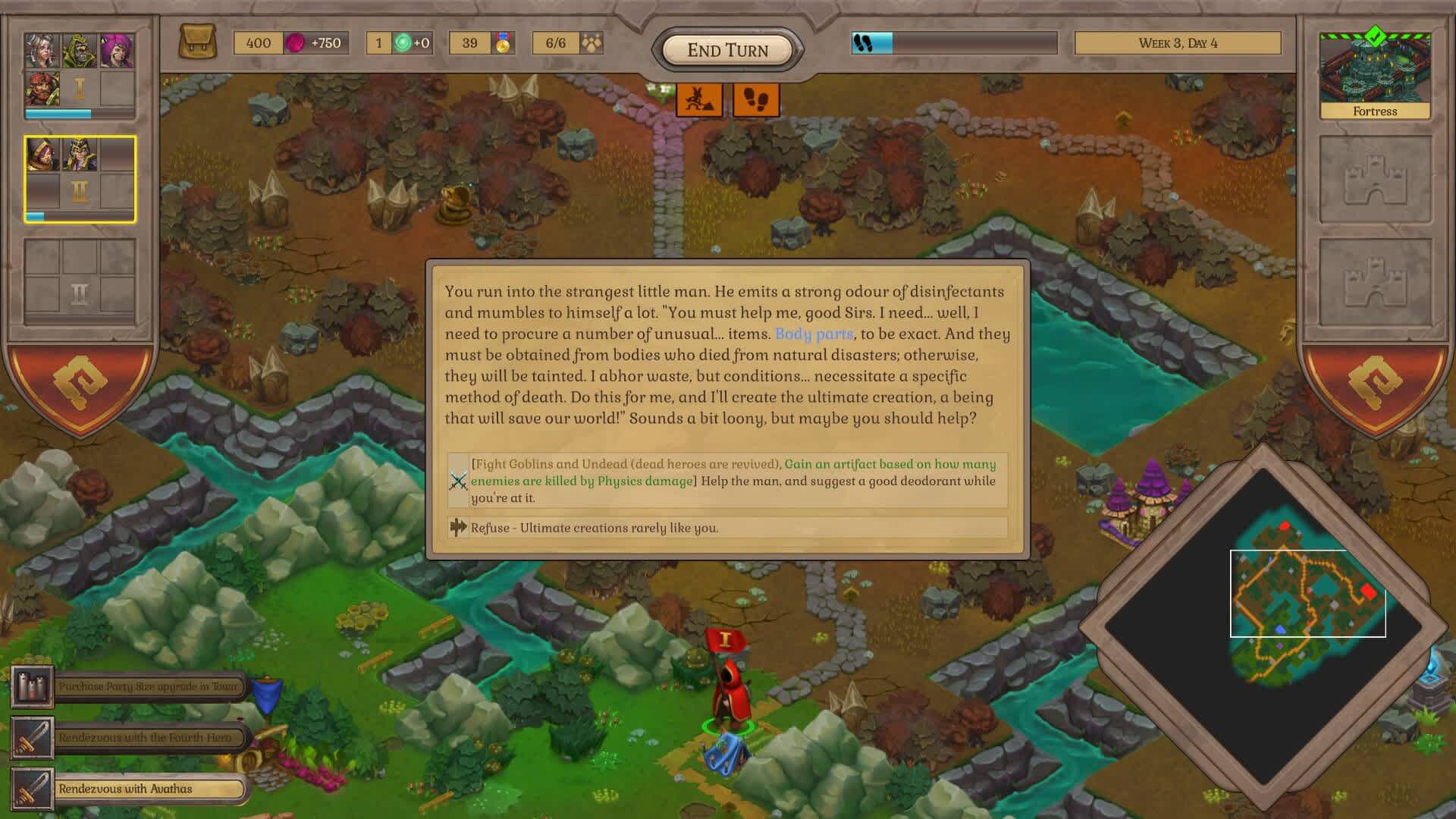 You’ll find a lot of things like this scattered around the overworld.

The main thing setting the tactical segments of the game apart from other games in the genre are the physics-based effects. Explosives can still destroy walls but more importantly, terrain objects can be manipulated to move cover or, in a more enjoyable manner, flatten enemies. If more tactical considerations are your concern, you can push certain pieces of the environment into enemies to stun them and cause damage, as well as pushing them backwards. It is very possible to chain stun in this way by cannoning enemies into each other/the environment and each class has a way of interacting with the map to unleash physics-based carnage/hilarity. It’s always worth remembering that whatever you can do, the AI can do as well so you should ALWAYS be prepared for one of your units to be stunned at the wrong moment.

This never gets old.

It is also worth noting that you can change the colour palette and name of your characters at any point and that they gain experience for taking part in quests. At certain levels, three abilities are randomly generated (mostly from the class but occasionally those from another class will appear and allow you to make flexible character builds) from which you can choose one, and each ability has a couple of upgrades to unlock when levelling. This results in a flexible character advancement system that means you can make the characters you want to use, rather than be forced into a specific class build. The various buildings available in your home base(s) also unlock passive abilities, but these, somewhat annoyingly, reset between each of the game’s three Acts. 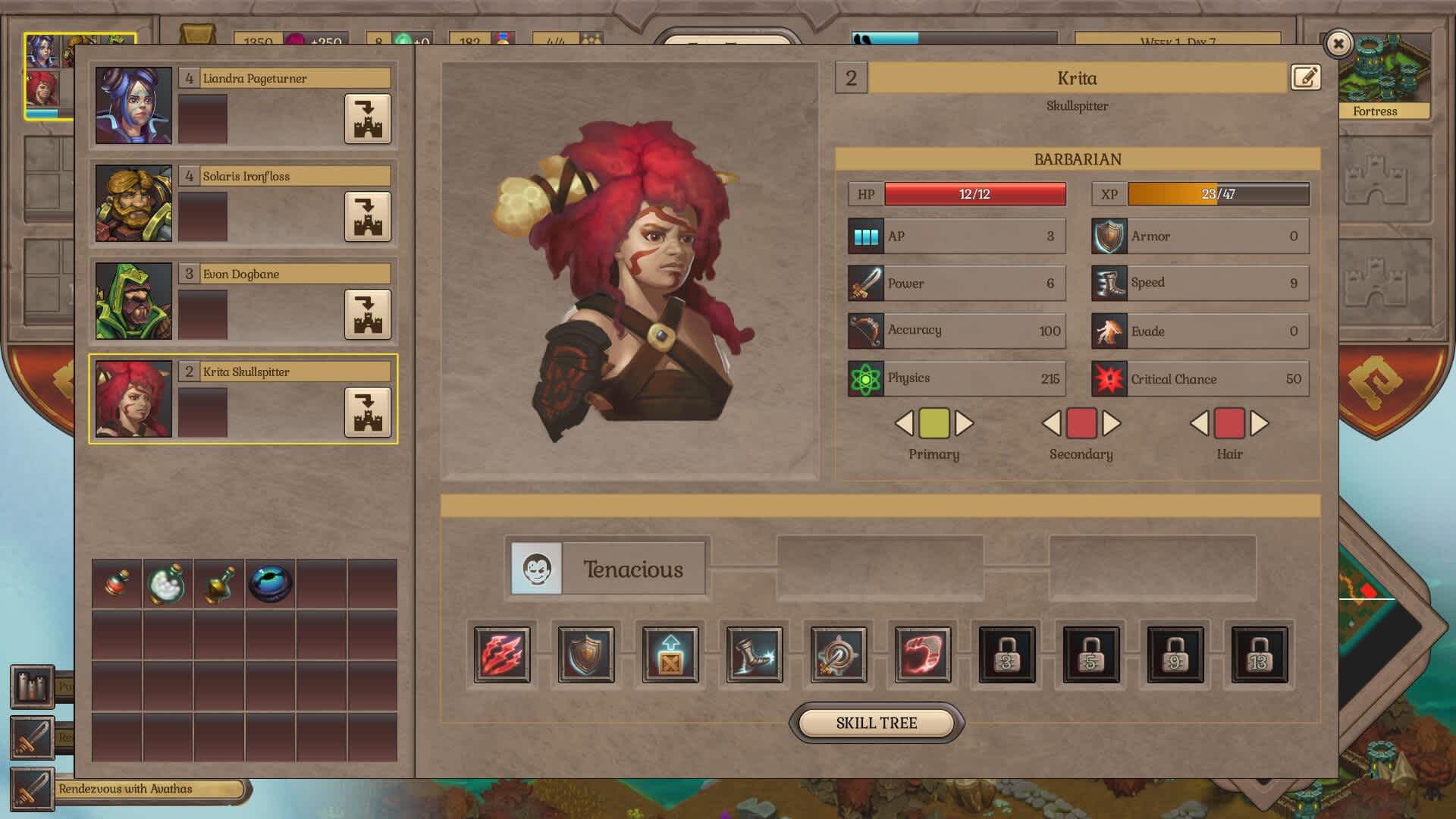 Whilst you can see your hero’s various ability scores here, you can (more importantly) customise their appearance.

All of the above is framed by a narrative worthy of Sir Terry Pratchett’s Discworld books. This is a game that doesn’t take itself seriously and is full of humorous conversations, oddball characters and moments of reflection that I believe many people would benefit from. The story itself is nothing spectacular, although I would rate it as above average, but its delivery is wonderful and is built around the randomly generated characters in a mostly seamless manner (I remember only one instance of an incorrect pronoun being used). The characters, both player and non-player, are well-written and I genuinely enjoyed every line of dialogue. If the main campaign isn’t your thing, however, you can create skirmishes (both with local co-op and without) to explore the overworld maps and the tactical side of things at your pace without having to follow a narrative. If you choose to do this, you can play as any of the game’s four factions (each of which has access to unique passive abilities), instead of being locked into playing as human characters. 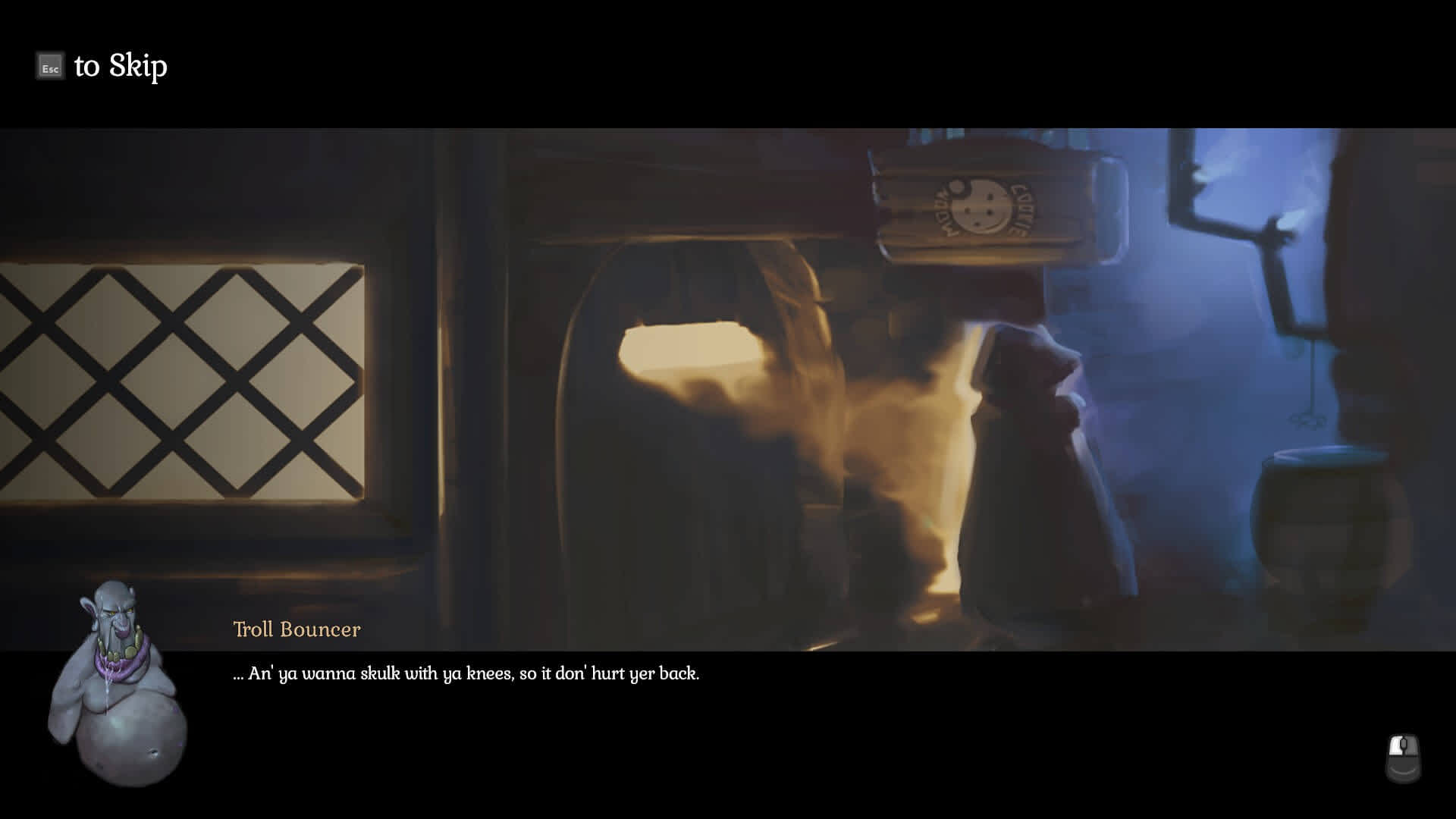 It’s important to now how to skulk properly.

Aside from the issues explained above, I found little else that affected my enjoyment of the game. It’s reasonably well-polished (the AI made questionable decisions a few times during my playthrough) and I found nothing that seemed to be a bug other than (occasionally) excessively long enemy turns whilst the AI decided what actions to take. There was certainly nothing that put me off returning to Fort Triumph after the 15 or so hours it took beat the main campaign (on Normal difficulty) and I can easily see myself playing many, many hours of the Skirmish mode against bots. At £19.49 on Steam (at the time of writing), I would whole-heartedly say that there is value for money here. Technically the game is endless, but even on the merits of the campaign alone I would say that the variety of difficulty levels, sheer number of ability options and enjoyable writing make the price point perfect.

Where are you going?!

Ultimately, of course, it’s up to you as the reader to make your decision but if you’re looking a fun, light-hearted tactics game with an enjoyable story and enough variety in its factions and enemy types to overlook the annoying soft reset of progression between Acts and the sometimes unclear visual presentation of the gameplay, you will not go wrong by buying Fort Triumph.

In the language of the internet: YEET! But strategically.