Get Orcs Must Die! for Free With GamerDating 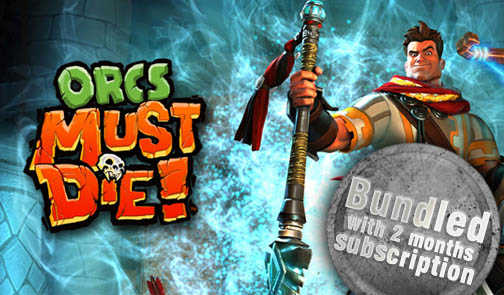 Have you played Orcs Must Die? Our team loves it and you can get a key for free, bundled with a silver subscription on GamerDating.

For those of us who are avid followers of tower defense games, this was a breath of fresh air. Yes, there are fortresses to defend, and plenty of enemies to slay but the genre-atypical third person view gives the game a fast paced, action game feeling. While many in the genre have the player control entire armies, in Orcs Must Die! the player is a singular human left to defend the world against the magical army of orcs with a combination of weapons, traps and magic.

The story starts with the Order, an elite group of wizards, who guard the rifts that connect the ‘Dead World’ to the human world, generating magic the humans can manipulate. After a surprise attack by ‘the Mob’ - the masses upon masses of orcs, ogres and gnolls controlled by a power hungry ex member of the Order - the Hero finds himself alone and having to save humanity. What does a hero left on his own do? Set tons of traps and enjoy the ensuing chaos, of course!

If you haven’t played Orcs Must Die! yet, we highly recommend it - and we aren’t the only ones. The game has an ‘Overwhelmingly Positive’ review on Steam, a 9/10 from IGN and a 4/5 from Joystiq among other high scores. Right now, we have PC keys but there is an Xbox 360 version; if you are one of our console gamers and want to see more keys you can use, send us an email to community@gamerdating.com.