Halo 5: Gaurdians players are getting a holiday gift a little early. Today, 343 Industries released a free update for the Xbox One shooter, called The Cartographer’s Gift. This is the second free expansion, it follows Battle of Shadow and Light which was released in November. The Cartographer's Gift adds more maps - both Area and Warzone, new assassinations, new REQs and what we are most excited about: a massive overhaul of Forge.

Forge has been rebuilt from the ground up for Halo 5: Guardians. Giving more power and control to the Forge community was the primary goal, and community feedback will continue to fuel the evolution of Forge as we update the mode with new features and content. Here are just some of the features launching with Forge in Cartographer's Gift:

▪    Multi-Select/Edit – Forgers can select and manipulate up to 64 individual objects at one time (more if combined with Groups); movement, rotation, property editing, everything you’re able to do to a single object.

▪    1700+ Objects – Forgers can expect a variety of pieces from primitive shapes, structure parts, accent pieces, detail props, and gameplay objects custom built for Forge. Mix them in with weapons, turrets, and power-ups makes this the ultimate Forge.

▪    Light Objects – Place real light objects in the world to light up interior spaces or just enhance a location on a map. Light objects have a whole slew of properties; point and spot types, light color/distance/falloff, light cone shape/size, lens flairs, and more.

▪    Light Fixtures – Additional light fixture objects such as light posts, beacon lights, etc. that come with lights built into them making it possible to set dress and light a space at the same time.

▪    Primary, Secondary, & Tertiary Colors – In addition to over 100 colors available, the vast majority of the Forge building pieces have tunable primary, secondary, and tertiary color change sections on them. This allows objects color variations from the blatantly oblivious to very subtle. Many also support changing the matte/metallic reflective properties of the color surface as well.

This almost made us forget how upset we are about the lack of local multiplayer. Almost. For more details on all the stuff coming with his update, check out 343 Industries blog post. 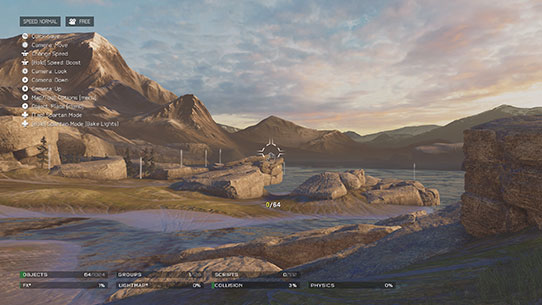