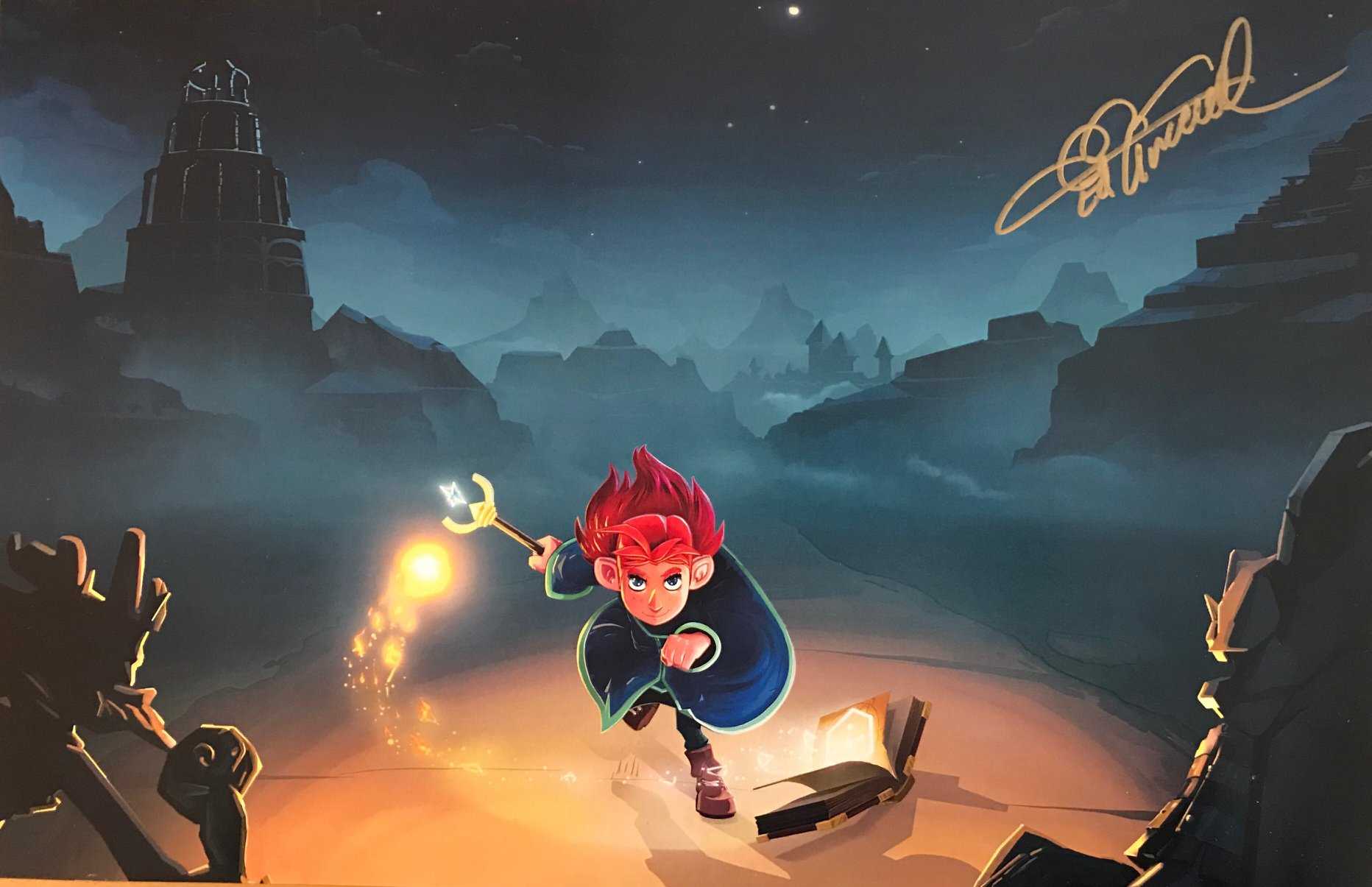 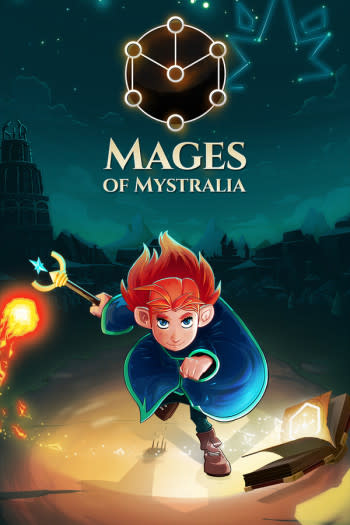 Mages of Mystralia is a bright, colourful single-player adventure, with an engaging story, memorable characters and tricky puzzles that challenge the player to think creatively. Join Zia, a novice mage in a world where magic is outlawed, as she sets out on an epic quest to learn more about her gift and save Mystralia from the forces of evil.

Combining the talented team at Borealys Games with Ed Greenwood’s brilliant fantasy narrative, this game will definitely have you hooked from the very first spell!

The world of Mystralia is full of bright colours with a wonderful art style. The cutscenes and loading screens are filled with brilliant illustrations, and the menus are well designed with attractive flourishes that are entirely in keeping with the fantasy feel of the game. However, when the game is first loaded, the player may need to adjust the brightness settings in order to more easily see Zia against the background. The lack of contrast in some areas can make it difficult to see which direction Zia is facing, which can make a huge difference to the accuracy of the puzzle solving and combat in the game. 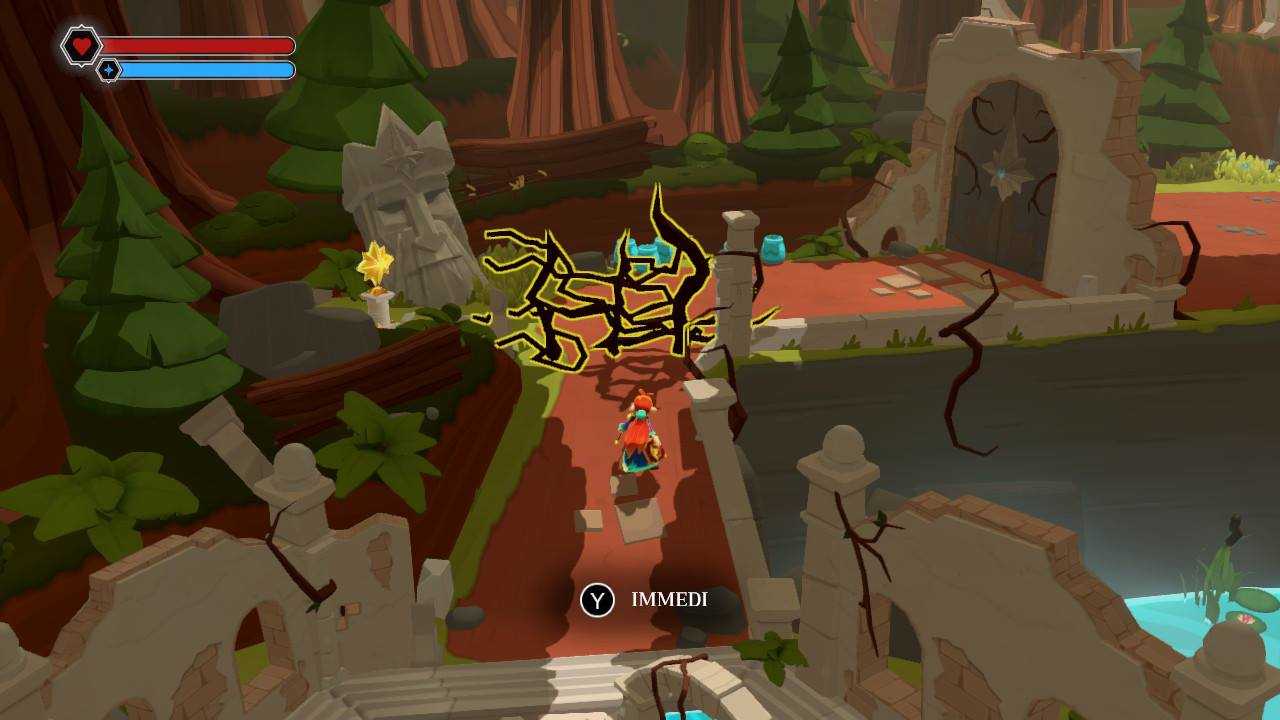 Learning your first spell can be tricky. Luckily, this unfortunate plant seems to be blocking Zia’s path.

The sound quality of the voiceover for the opening cutscene is excellent and quickly draws you in to the mythology of Mystralia. Currently, there are some difficulties with the sound differentiation during the main game, however there is a patch coming soon to fix this.

The game map is beautifully rendered and includes snippets of lore about each of the areas you can visit, however the text is quite small even in docked mode, which can make it difficult to read. The user interface makes it easy to find your current location and the use of exclamation marks lets you know exactly where you need to go next. This can be particularly useful if you’ve been on a side quest or puzzle hunting for a while as a tool to get you back on track with the main story. 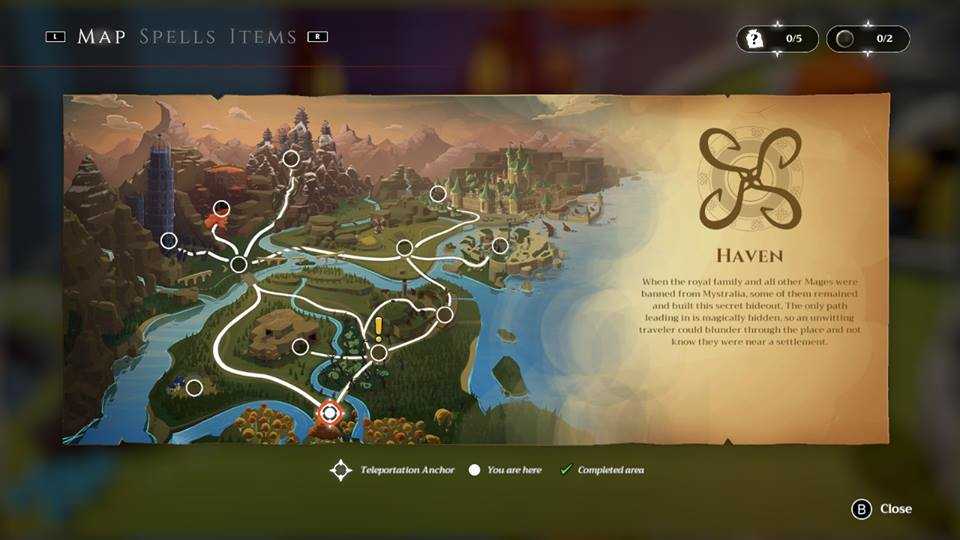 Location, objective and lore all surrounded by gorgeous graphics. If only navigating the real world looked this good!

The attention to detail and commitment to the fantasy aesthetic in the game is fantastic. Each of the in-game items has been well crafted, and the spell effects feel realistic and weighty. The game does suffer a little in terms of frame-rate later in the game as you use more powerful spells against larger waves of enemies, but the overall gameplay doesn’t suffer too much, and it doesn’t take away from the combat experience. In fact, using your most powerful spells to test the limits of the game can be really satisfying. 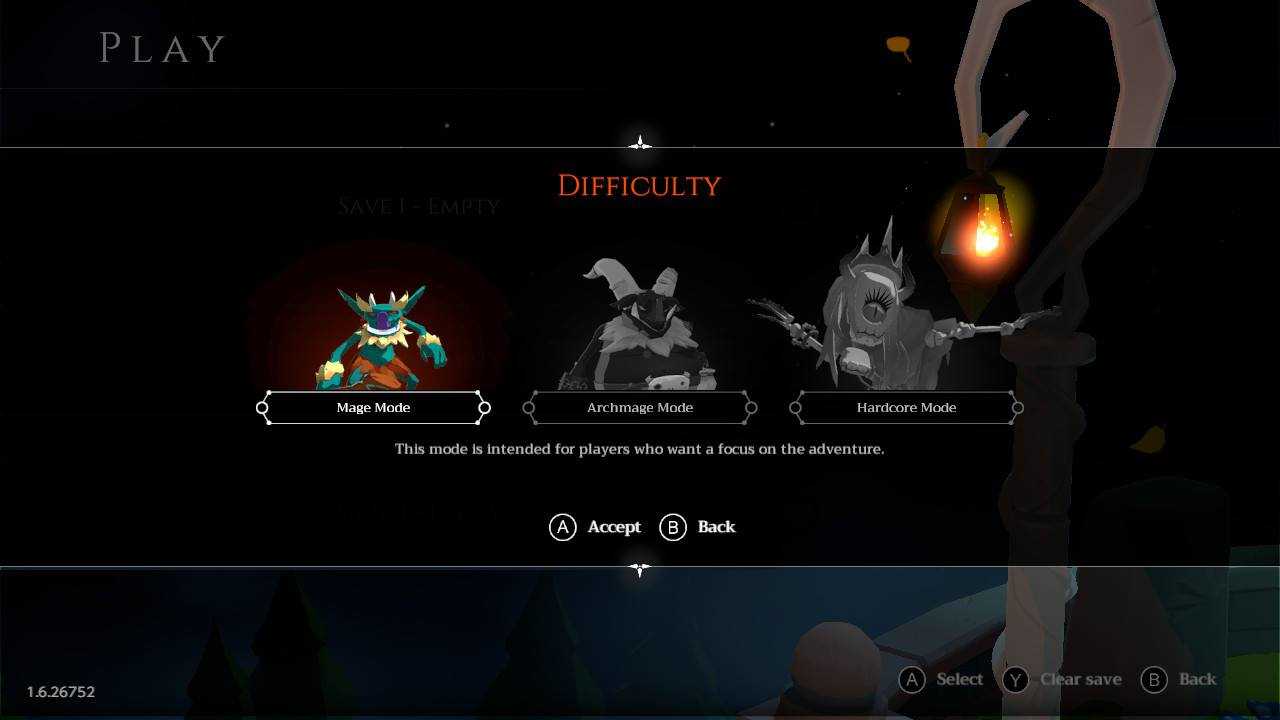 This choice separates the novice from the archmage.

The tutorial and save feature is well woven into the narrative of the game so that these necessary functions don’t disrupt your immersion in the story. Combat is both challenging and interesting, with each boss in an area providing varied mechanics that require out of the box thinking and use of environmental features found within the arena. Each area also includes its own kind of minion enemy, with resistances and attacks that suit the environment that surrounds them. Figuring out which combination of spells will work best in combat with each kind of enemy adds an element of strategy that keeps the areas fresh, even when revisiting them multiple times. Story beats also unlock new enemies, which can force the player to adapt an established strategy, keeping the gameplay challenging throughout.

Even though combat is a large part of progressing in the game, no area of the map can be completed without some element of puzzle solving. While many of the puzzles offer some variation on a similar theme using common mechanics, each one requires some level of critical thinking and utilizing combinations of the skills that you learn on your journey. The hint system available during these puzzles is helpful without handing out the answers, as it provides the combination of skills that will make up the solution and relying on the player to put the pieces together. 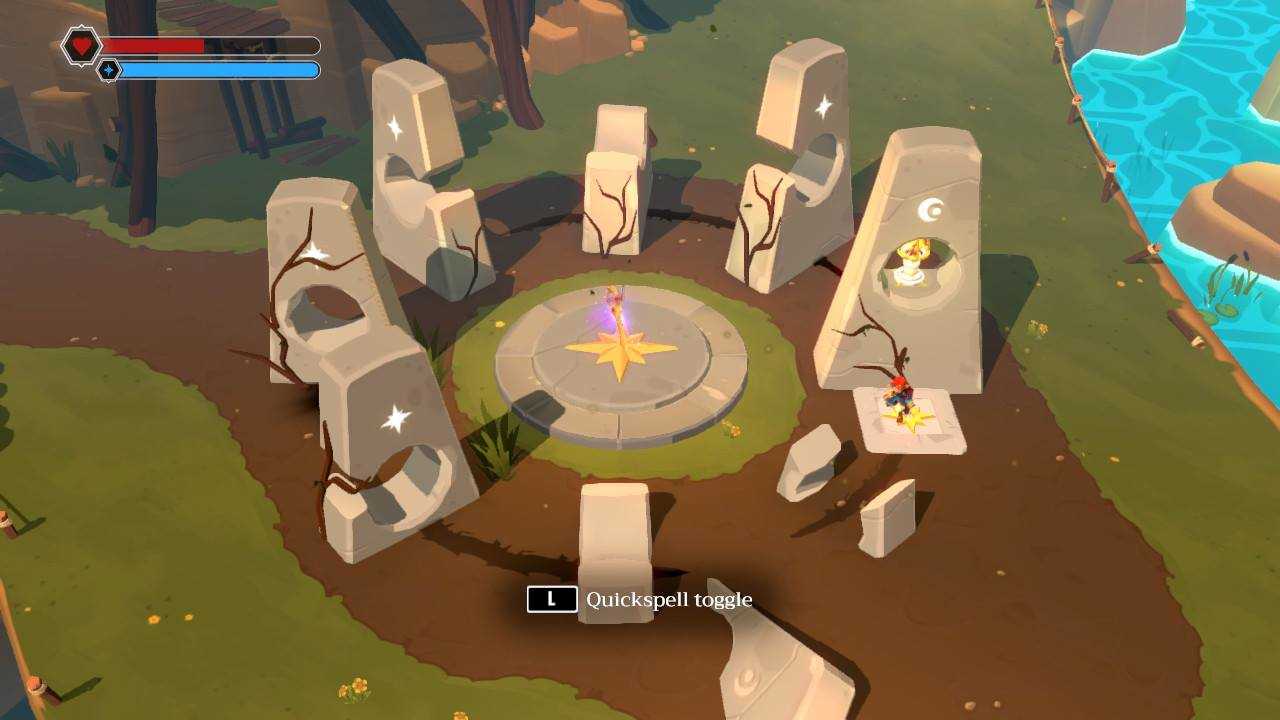 How on Earth do you send a spell in a circle?

Each area of the game has a distinct aesthetic and musical score, giving each its own unique feel. Although the colourful design gives the game a deceptively happy atmosphere on the surface, the story deals with some serious issues that add weight and depth to the experience. The story itself may seem simplistic at first, but includes a wealth of world-building lore, along with some twists and turns that are artfully foreshadowed through design and sound choices.

The end game offered a different take on the combat system set up throughout the rest of the game by including a range of enemies from each of the areas on the map, requiring the player to think tactically about the approach to each level. The final boss also includes the use of timed puzzles, something that none of the other bosses require and something that added to the pressure and gravitas of the experience.

One of the best features of Mages of Mystralia is the ability to create and enhance the spells that Zia can use. Zia begins with four basic spells based on the four elements, with each one tailored for defence, utility, close combat and long-range combat. As you move through the game, you collect more runes that can be added to your existing spells or used to create new spells that can generate a specific effect. This means that you are able to fully customise Zia’s attacks based on your preferred play style and the mechanics of the area, enemy or puzzle that you are facing at any given time. Having the ability to rename your spells enables you to use the L button to quickly change from one spell to another at any time, allowing you the flexibility to adapt your approach in response to any obstacle.

Adding runes to spells includes its own element of problem-solving, as each spell has a unique combination and number of connectors, so working out how to lay out the runes to generate your intended effect can become more difficult as you collect more runes. The order that the runes are connected in can also affect the spell, which is critical when solving some of the puzzles in the game, so it’s a good idea to keep at least one of each kind of spell in your spell book available for easy editing. 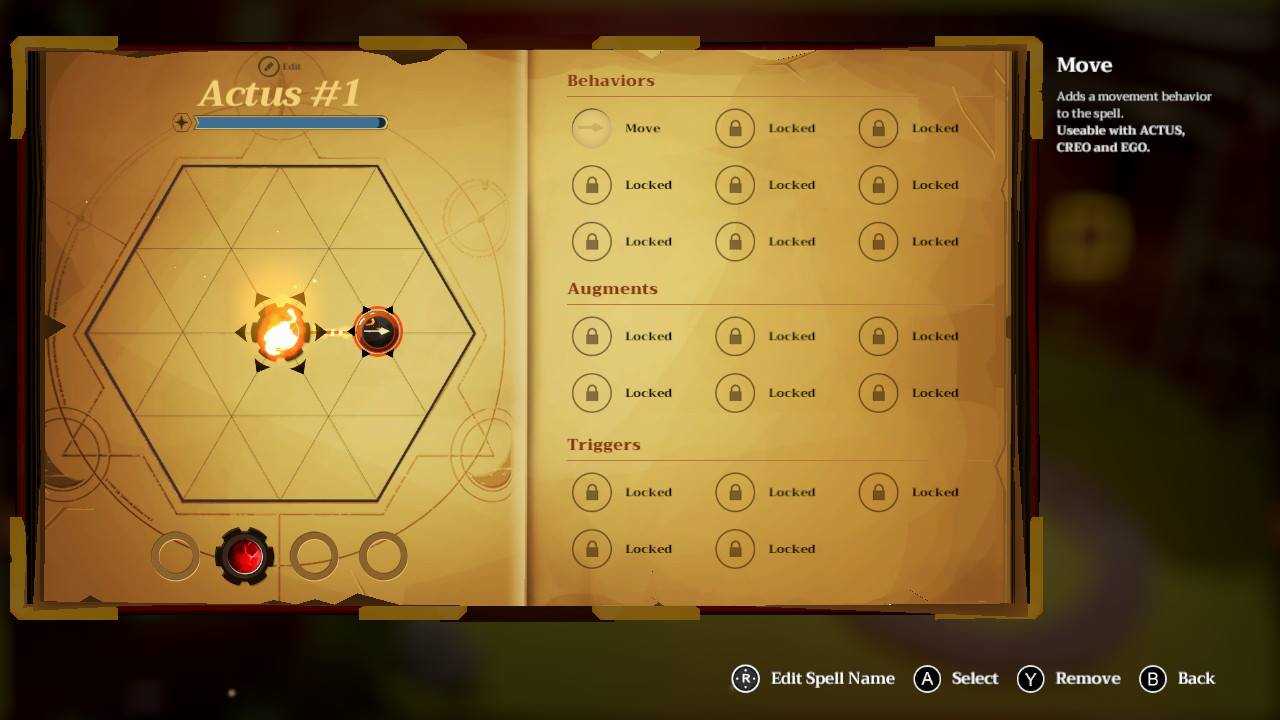 There are certain runes that will allow you to chain spells together, which adds an element of Mana management to the game. The more runes that you add to a spell, and the more spells you chain together, the more Mana that spell will cost. If you really want to be able to play with the rune combinations to find what works best for you, upgrading your Mana is a must, especially in the later sections of the game.

The UI for the spell-book is well designed and entirely in keeping with the fantasy theme of the game. The selection elements have been carried through from the Main Menu screen and the spell-book design and sound cue really give the impression of quickly flipping through an old spell-book to find the spell you need.

The overall interface can be a bit small in handheld mode, making selecting the right spell quickly difficult. Placing runes using a thumb-stick also presents some challenges as it can be hard to see where on the grid you are currently selecting, meaning that you may struggle to place runes correctly on the first try.

The fixed camera angles can, at times, make gameplay difficult, especially in areas with high walls or multiple levels where the camera is positioned directly above, or at an angle to Zia. This did mean that discovering smaller areas of the maps or solving problems that require contextual clues could be problematic, especially when in handheld mode.

The movement and directional controls for Zia don’t always translate well from the PC to the Joy-Con. When in tight spaces or solving puzzles that require facing in a certain direction, ensuring that Zia is facing the right way without also moving her is almost impossible, and can lead to having to repeat the area multiple times.

Cut scenes are well executed, but it is important not to move Zia out of the established context area until the cut scenes have completely finished to avoid crashing the game or getting stuck in a corner. However, quickly resetting the game by returning to the main menu solves the problem.

New areas of the map can take a while to load. Each loading screen includes snippets of lore to give you more information about Zia’s world, but in handheld mode, the text is very small. Some areas do change the loading screen art and lore to reflect events in the story as it progresses, which is a nice touch that keeps you immersed in the world. 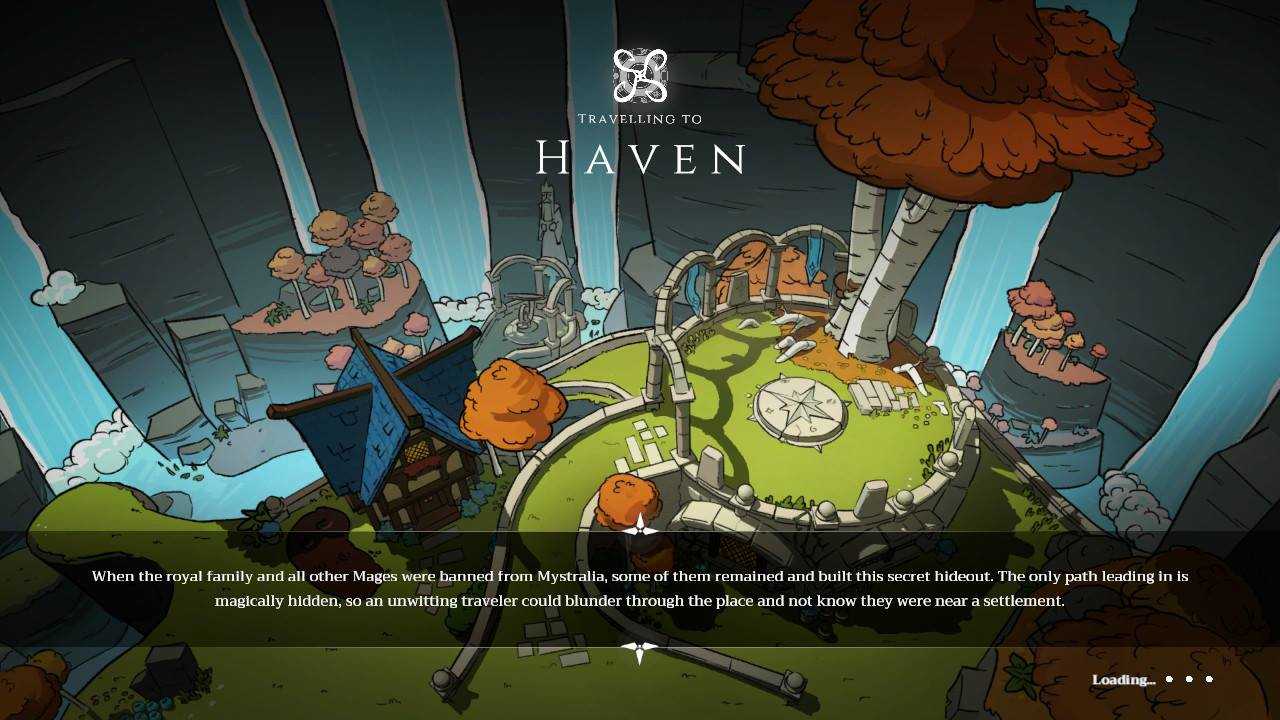 Loading screens, brought to you by the travel association of Mystralia.

Mages of Mystralia offers around 20 hours of engaging gameplay, which will scale up with the harder difficulties. There is no multiplayer option, but there is a Trials area with waves of enemies to beat for rewards. This area is required if you want to 100% the game and can provide a challenge, with a mix of enemies from each of the game areas. However, by tackling this section late-game with the right combination of spells, all of the challenges are easily completed.

The biggest enticement to replay the game is the spell creation mechanic, which encourages you to replay the game to discover the optimum combinations of runes and spells to beat the various bosses at the different difficulty levels.

With a captivating story, stunning visuals, and creative gameplay, Mages of Mystralia is definitely worth its £17.99 price tag. The unlimited number of spells you can create will capture the imagination and keep you coming back again and again to revisit Zia and her companions and to save Mystralia in new and innovative ways.

On balance, Mages of Mystralia is a fun, engaging adventure through a vibrant fantasy setting that incorporates a story that touches on deeper issues of discovering who you are in a world that can seem ever more hostile. Combining spell creation, varied combat, and creative puzzles, the game challenges you to think outside the box and forge your own path through this magical world.

I would absolutely recommend this game to anyone who wants something that will encourage them to think critically and still have hours of fun! Now, if you’ll excuse me, there are more spell combinations waiting to be tried.

See you in Mystralia!