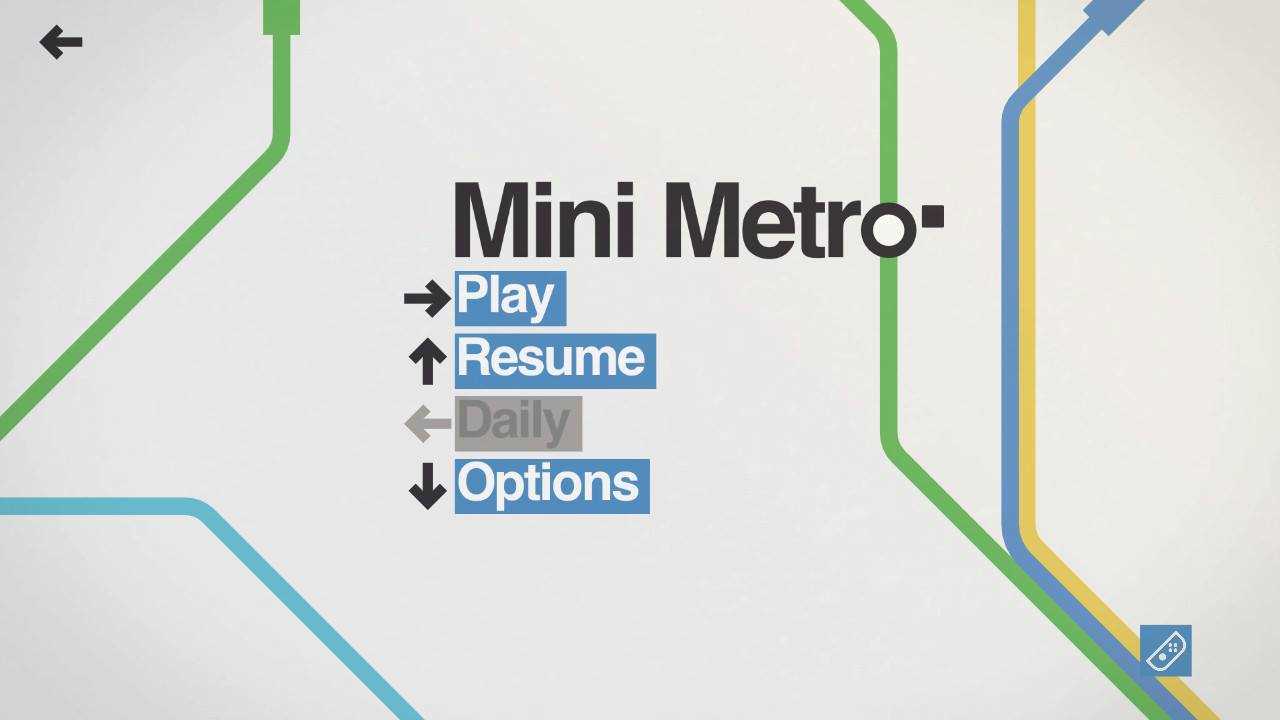 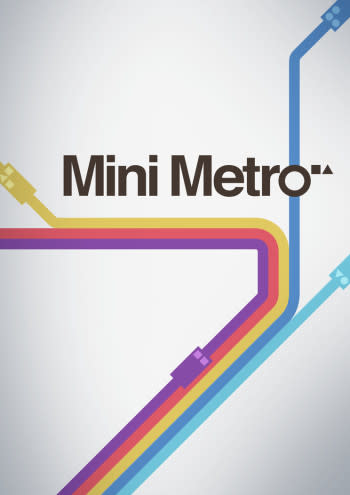 Mini Metro is billed as a strategy game and while there might be some strategy involved it plays more like a sometimes frantic puzzle game.

With many game modes and a variety of maps this charmingly simple game will provide entertainment for your own train journeys.

Visuals
The first thing you’ll notice is that Mini Metro is graphically simple; a small pallet of flat colours and icons keep it crisp and clear. At times however the user experience is a little too simplistic and when you encounter new functions or items to play with its sometimes frustrating to figure out what that fancy new icon actually does.

Particularly irritating to me was trying to figure out where my passengers actually wanted to go and after a few minutes of head scratching the internet told me that they don’t really care where they go, just closest station with the same icon as them. Once you are over the limited instructions you are left with a charmingly simple and quite relaxing appearance, once you know what every icon does the gameplay just flows.

As a big fan of accessible gaming I need to point out that it includes nightmode and colourblind options which will help people with light and colour sensitivities get started, props to the developer; Dinosaur Polo Club for considering this. 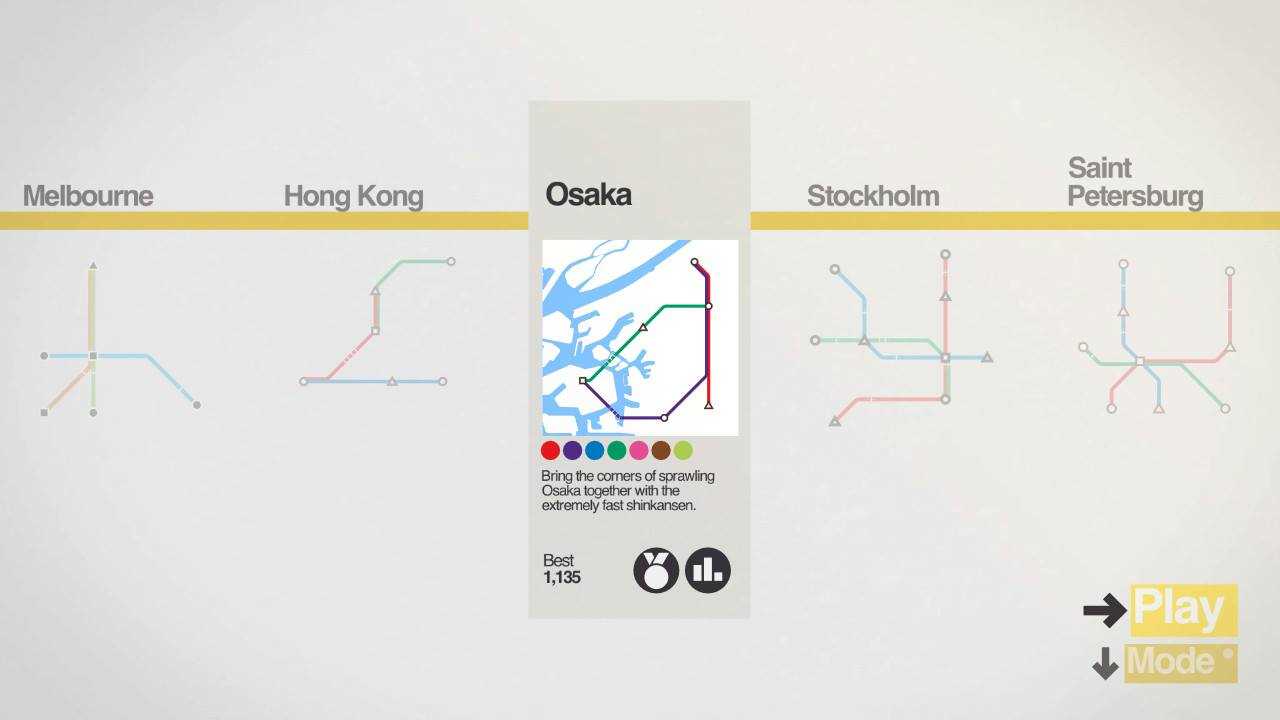 The visuals and colour blind modes are a great consideration that are easily implemented.

Gameplay
Mini Metro has a simple and straight forward concept; connect the stations by clicking one and then joining it with another, a line pops up, a train starts running and passengers are transported. At the start you have limited maps, so just pick one, select your mode and off you go.

Stations are represented in shapes; circles, squares and triangles at first with additional ones added as the map gets bigger and your stations get busier. Passengers are also represented by shapes which indicate the station they want to go to, every completed journey adds up and is needed to unlock a new map. If a station gets overcrowded a timer ticks up, if you fail to get them a suitable train going to the right destination in time your entire metro will close – a worryingly authoritarian decision! As the in-game clock tracks your days and time the game gets increasingly difficult, more passengers and stations appear and things start to get a little frantic.

I frequently found myself shuffling my carriages and trains around to help an extremely busy line, but maybe that says more about my ability to manage a metro system than anything else. To help you deal with the progressively chaotic commute each in-game week also gives you new lines, trains, extra carriages or intersections.  Transport enough workers to where they need to go and you’ll unlock a new map.

My favourite feature of Mini Metro is that many maps have a “quirk” or “theme.”  For instance Sao Paulo has less stations but they’re busier, Melbourne has trams not trains and are slower. My personal favourite is; Osaka, which gives you Shinkansen – extremely quick trains that you should use on your busiest lines. 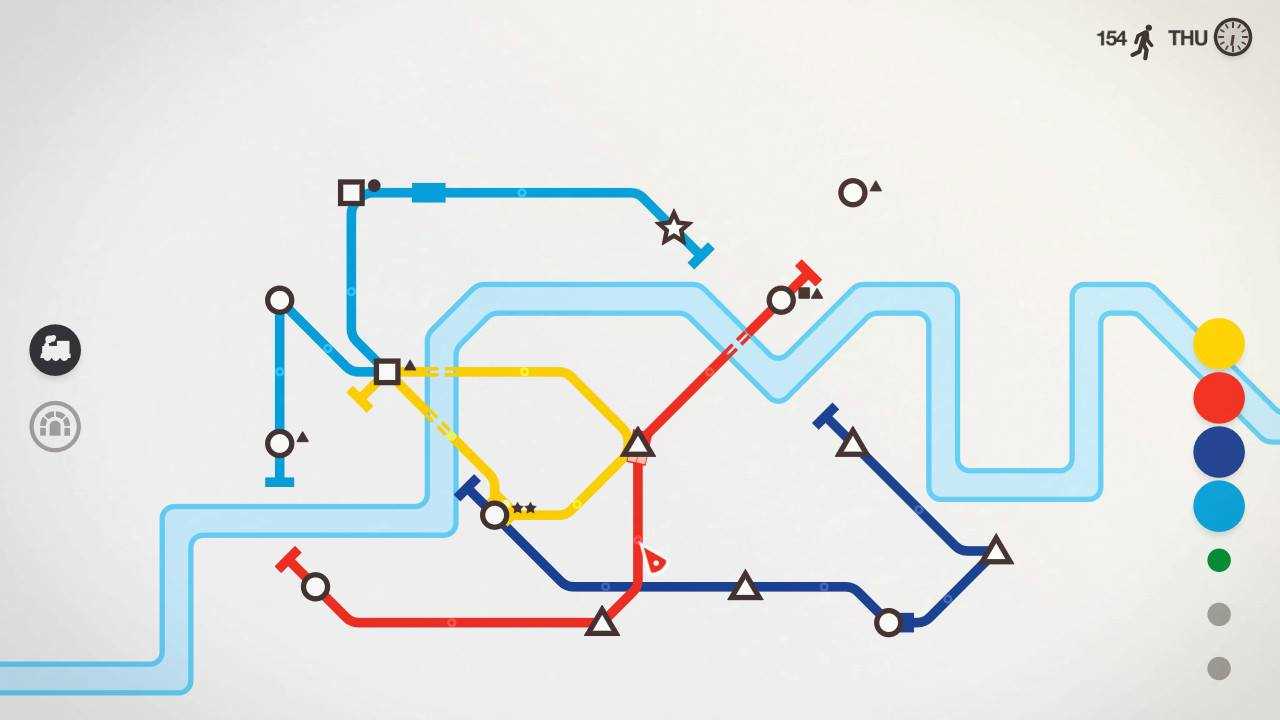 Maps our laid our beautifully and you soon identify your favourite maps or themes.

Longevity
Mini Metro has several modes that add extra layers of longevity and come with their own progression goals and unlocking methods, but more importantly this opens the game up to different play style preferences. Extreme mode is for those of you that like a hectic pace, Endless mode for those that just want to play and the recently added Creative mode for players that want to build and customise every aspect of their metro.

Unfortunately while I thought Creative mode would be the closest to a full transport/city management type game it was lacking many features for this and Osaka in Endless mode became my flavour of choice.

Mini Metro has more in common with short-burst play puzzle games like Lumines than city builders or transport management games which contradicts my initial impression. Not a bad thing, I just came in with different expectations. 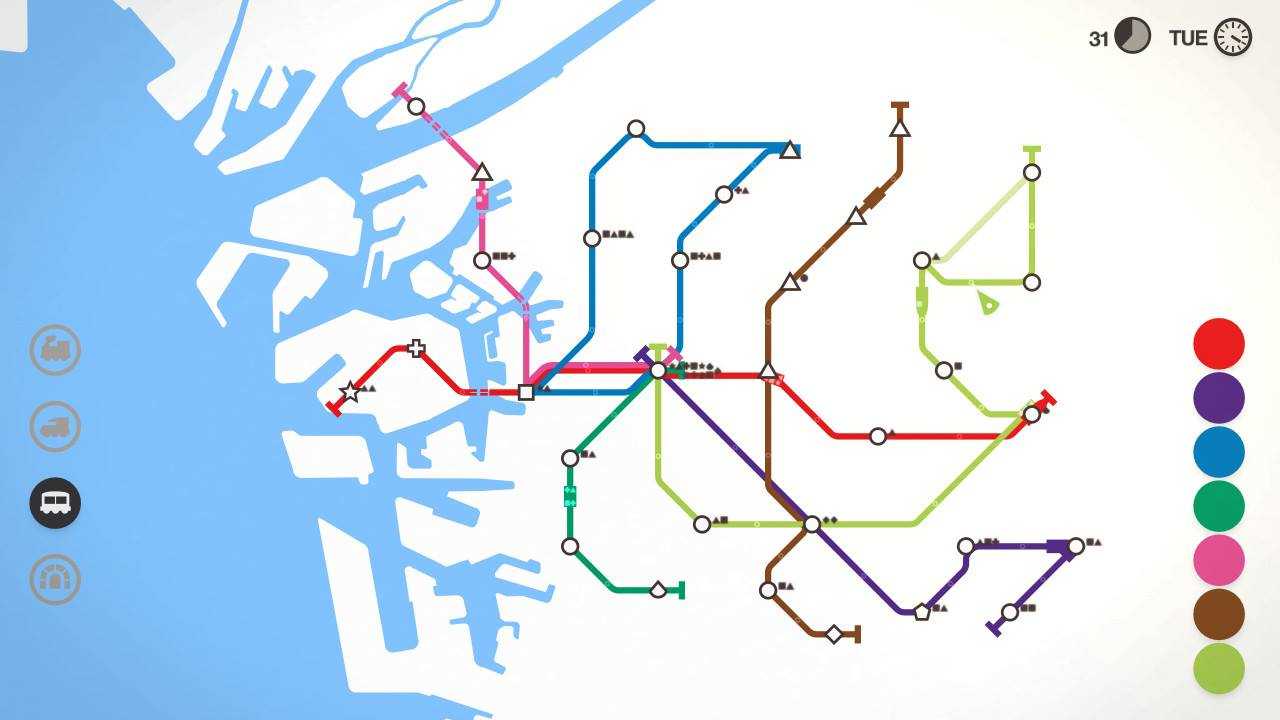 Endless mode and creative mode mix up your playstyle and goals.

Stability and Control
So far in my 20+ hours played I have only encountered one issue, my cursor vanished and I found myself unable to click things, I had to close and open the game again. While I never encountered any game breaking bugs the controls were somewhat irritating and even now I have still not felt completely comfortable with them. I think this is the biggest problem and likely lies in the translation from a mobile game to the Nintendo Switch. The controls work, they are just a little fiddly, a bit more thought would have gone a long way.

Pros:
•    Simple mechanics simple joys
•    Finding a map you like and will repeatedly play has a heart-warming feeling
•    Great for on the go gameplay

Cons:
•    Confusion about who this game might actually appeal to
•    Almost no explanation on many UI icons is frustrating
•    Controls are a bit fiddly

Conclusion
For what is initially a mobile game Mini Metro is a fun little time killer, it has enough content and variation to appeal to a wide range of audiences and has found a home on my Nintendo Switch.

The lack of information and slightly awkward controls are annoying at first but once you’re over that hump the strength of the gameplay shines through.

If you like simple pick-up-and-play puzzle games you will enjoy this.

$9.99 is a bit of a stretch, it would benefit greatly positioned at $5 – definitely one to look out for in sales, and at the time of writing it's on sale on Steam!