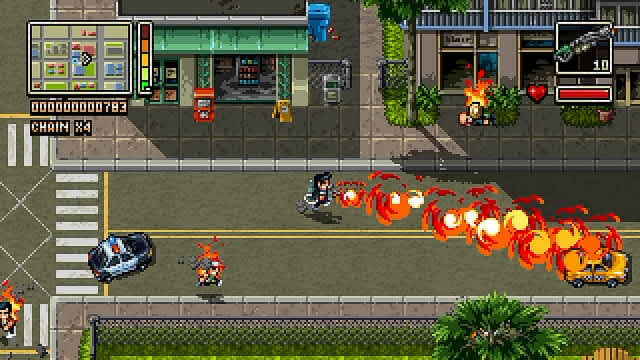 PlayStation and Vblank Entertainment announced a sequel to Retro City Rampage today. The 16-bit follow up, called - Shakedown Hawaii - takes place 30 years after the previous game and follows The Player as he is forced out of retirement to save his "neglected corporate empire". There aren't a lot of details in either the blog post or the trailer, but we do know it will release for the PlayStation 4 and Vita and that the first game was a ton of fun.

Retro City Rampage was released three years ago for PlayStation 3 and Vita and Microsoft Windows with most other platforms getting their versions soon after. It is an open-world action-adventure and parody of games like Grand Theft Auto. With nods to pop culture of the 80s and 90s at every turn and an NES feel that will probably always give some of us the warm and fuzzies, Retro City Rampage is a great game for anyone looking for a nostalgia bomb. We have high hopes for Shakedown Hawaii and will keep you updated.