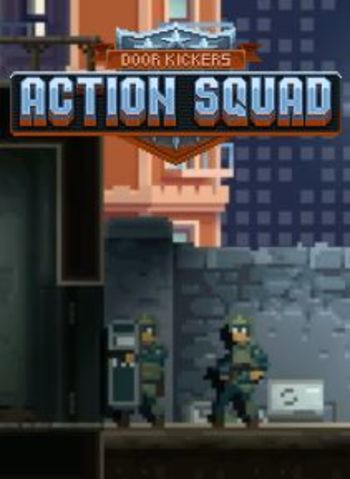 Door Kickers: Action Squad is what I imagine life would be like as an actual SWAT officer, only with less respawns and not in 2D side scrolling pixel art.

I want to begin by prefacing that I adore 80s action movies, with the bullets flying, blood splattering and explosions…exploding. So you can understand why I relished the opportunity to review Door Kickers for the site. I watched the trailer and it ticked a lot of boxes for me and my gaming preferences; cheesy 80s nostalgia, check. Cool retro pixel art style, check. Simple interface and a pick up and play approach, check.

Don’t get me wrong, I have enjoyed my time with this game, I do like it, but all the pieces should be there for it to go beyond just liking it. 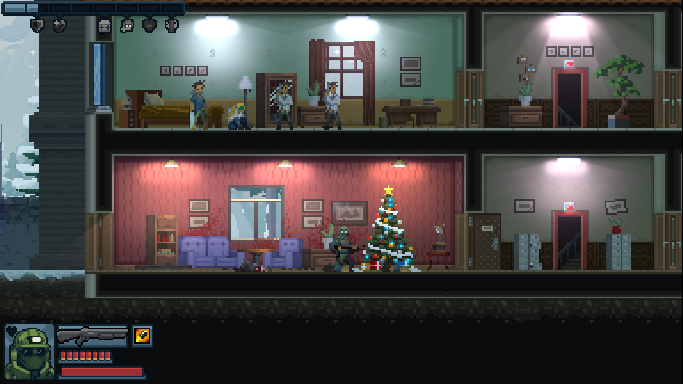 Let’s start with the looks and sounds. I adore the renaissance of 2D pixel art games that we are seeing on the market these days. My first gaming experience was my brother’s hand-me-down ZX Spectrum + 2 complete with its own tape deck for the games and a whopping 128k of memory! Pixels are my jam.

Door Kickers is one of the latest in a long line of games to keep that soul of old school gaming alive, with its blocky sprites and its exaggerated blood splatters lovingly and liberally gushed across the walls and floors with each kill.

The music of this game is just ugh, *chef kiss*, splendid. It is straight out of the 80s movies that I love so much. Wailing guitar riffs, synthesised drums, and the voice and guns are crisp whilst still having just a muffle of softening on them to emulate that old school gaming vibe.

The HUD is a simple layout, your health, ammo, equipment etc. down at the bottom left, with a special action bar at the top left that gradually fills the more kills and hostage rescues you get, giving you access to power ups or your ultimate ability.

The premise is simple too, explore the level, kill the bad guys, rescue the hostages. Sometimes, the hostage are injured cops who will then stick around and shoot bad guys too, which is super useful. 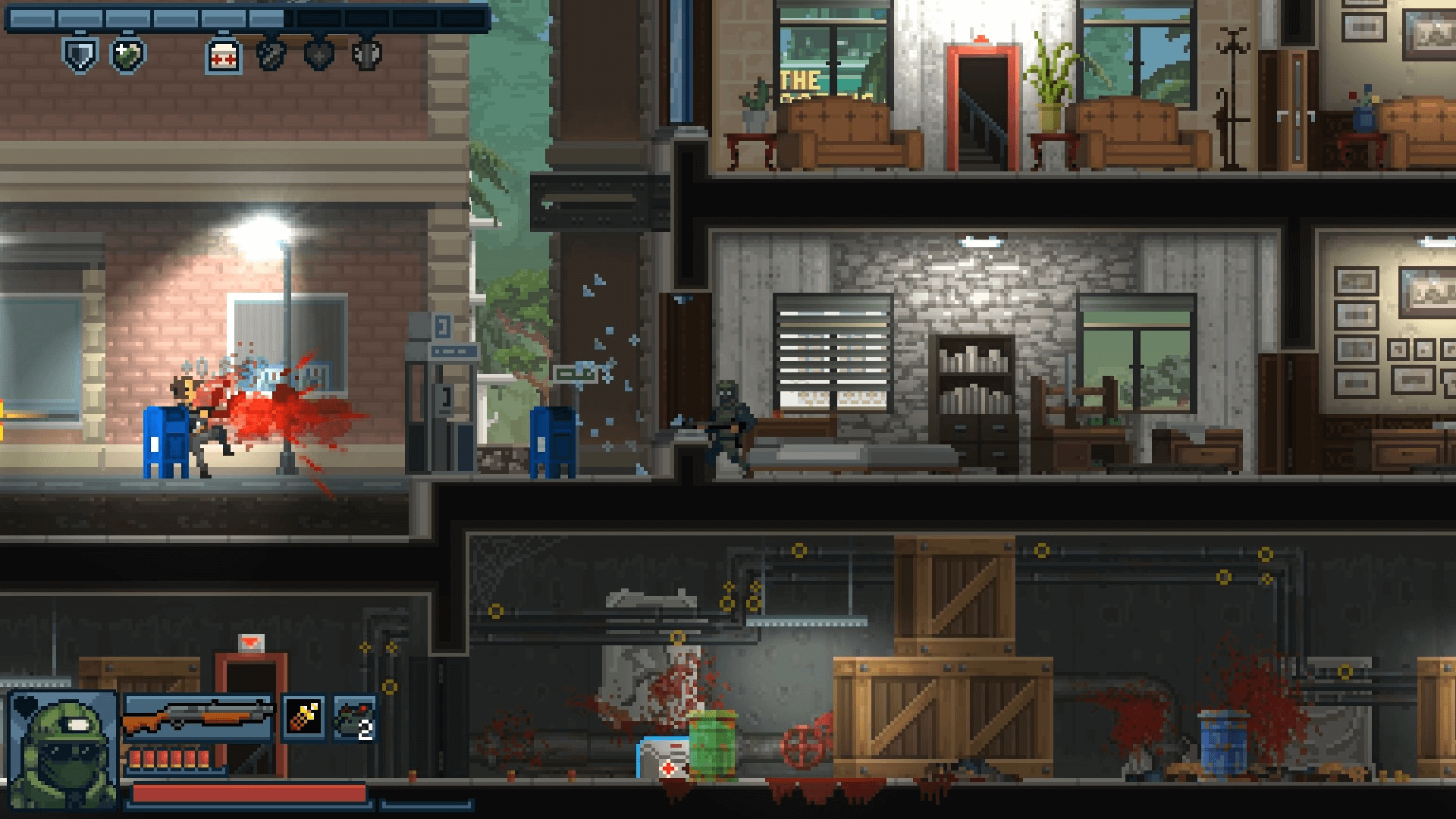 “That room beneath is about to get painted red…”

However. This is also where the game let me down in some ways.

There is very little in the way of tutorials in this game, so it is very much a figure it out yourself sort of experience other than a quick “push this button to shoot”. It doesn’t even tell you what the jump button is. I had to go into the settings to look at the key bindings just to figure out how to jump. And even then, only through past experiences of games like this did I even think that pressing jump while crouching would get me to a lower platform. The game did not at any point tell me that.

Also, the difficulty doesn’t so much as spike, rather punch you in the face with a lead filled glove from the second level.

I like difficult games. I eat, sleep and breathe Dark Souls. So when I say this game gave me a hard time, that is no small statement.

I can’t comment on the co-op because, well, I have no friends to play Local co-op with and every time I tried to get into a game of the online co-op I was staring at this for 20 minutes: 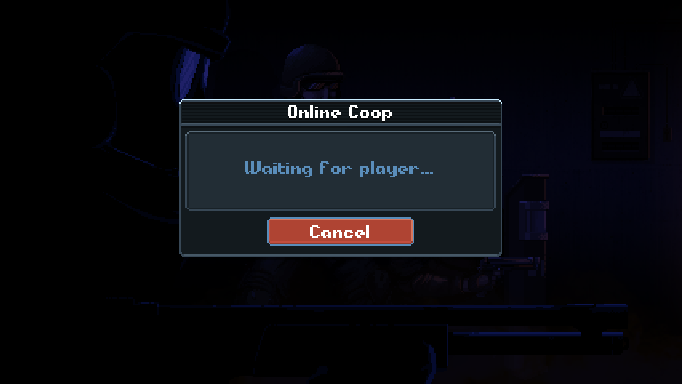 I’m sure there are players out there playing this online, but apparently not when I was trying to. Though I’m sure a second player might make the difficulty of this game a little more manageable, two heads being better than one and all that, plus working out the interesting synergies between the different characters.

There is a mode in this game called the Infinity Tower which, as you might guess, is an infinite run to see how long you can last in a procedurally generated building climb.

One room. I died, repeatedly, in the first room.

Now, in my defence, I tried this mode at a very low level with my character (and we’ll get on to those in just a second) so I was horribly underpowered and came across bad guys with weapons I hadn’t even seen in the main game so far, so I’ll give that a pass, but even still, the main game itself ramps up horrifically. One false move and you’re either dead, or you’ve accidentally killed a hostage or two so kiss that perfect 3 star level rating goodbye (and you use these stars to buy better equipment, so you kinda want those perfect scores).

So, the characters. I went into this game knowing that there were multiple characters, each with their own unique weapons, skills and playstyles.

Does the game tell you how to change your character or equipment? No!

I spent hours going through the main mode with the basic Assaulter character, with his basic weapon and no upgrades or equipment until I accidentally figured out that I could use the arrow keys on the character select screen before a mission. Again, this could have been easily fixed with a simple text box in a corner or something.

Plus, there is a cover mechanic in this game. Does the game tell you this? No. How did I learn this? When I eventually figured out how to level up my skills and Assaulter has a skill that gives him lower recoil while in cover. Cover, it turns out, is the slightly glowing crates, barrels and furniture in the levels, which you need to be practically inside of before you crouch for it to register you’re in the cover.

By this point, some hours in, I was already levelled in the early teens with my Assaulter, so I begrudged going back and trying different characters but did so to give them a try and see if I preferred any of their abilities better than Assaulter’s Aimed Shot which, to be honest, I never used.

Two characters stood out to me in particular.

Shield is a lot of fun. As her name suggests, she has a massive shield and a pistol. She can take a metric ton of gunfire before her shield breaks, but is weak against melee attacks. She’s great. I love her. I’d have loved to have played her from the beginning!

Then there’s Breacher. Now. Breacher is a lot of fun. Breacher has a shotgun, which is great for clearing out rooms of bad guys. But, you know what’s not great for hostage situations? Spread weapons. Hoo boy did I accidentally kill a lot of hostages while playing as Breacher…

“A shotgun to make even George Ezra proud.”

Special mention to Agent Fergie who is a no nonsense FBI Agent who takes no crap. She has the ultimate ability of…another gun! That’s right. She pulls out a second pistol and goes all guns blazing, pistols akimbo for a while and it is adrenaline fuelled hilarity!

Door Kickers is a fun game. As I said at the start, I do want to stress that, please do not misunderstand me. But, I do think that there is a lot that the developers could include just bring that little bit of extra polish to it. While not a buggy game at all (in my entire play time, I have encountered zero bugs or errors) I feel it could just use a little bit more insight as to how things are done, to make the game that bit more accessible, more tooltips or heads up tutorials or something, because there is far too much in this game that you are left as a player to figure out for yourself.

Door Kickers: Action Squad is available on Steam at the moment for $13.99 and this feels like a good price for what you do get. It is an easy game to drop in and out of. It does have a large difficulty curve, but that is what I found brought me back after rage quitting a session; the urge to beat a level that was giving me trouble previously. This is how I approach hard games. I take breaks, I come back refreshed, I learn. It works with Dark Souls and it works here too… sometimes.

Overall, it is a solid game, it is a heartfelt head nod to 80s action nostalgia and it does get your blood pumping and it does satisfy that tactical itch.

Issues aside, I do like this game, a lot. But I just can’t love it.