October Rewards - Latest games for you!

GamerDating's October Game Rewards 2021 This months new Subscriber Rewards are: Potion Craft: Alchemist Simulator, Aragami 2, Tails of Iron, Arboria, Hoa and more. More offers, more games, more options for dates. Each week we add more new games that are available with your subscription, and each month we update the selection. Check out the summaries or skip to the list: Gamer Dating Rewards Rewards Game List We offer 2 or 4-

GamerDating's September Game Rewards 2021 This months new Subscriber Rewards are: Tormented Souls, Road 96, City of Gangsters and Jupiter Hell. More offers, more games, more options for dates. Each week we add more new games that are available with your subscription, and each month we update the selection. Check out the summaries or skip to the list: Gamer Dating Rewards Rewards Game List We offer 2 or 4-month subscriptions

A beautiful update to a big adventure in a tiny world. Earlier in 2021, one of my favourite game studios, Chibig Games, released an updated version of their game ‘Deiland’ for the Nintendo Switch. A relaxed, quest-based farming adventure game that takes you on a journey from your own tiny planet across the galaxy as you try to solve the sinister mystery that endangers your world. You play as Arco, the sole inhabitant of the tiny pl

GamerDating's August Game Rewards 2021 This months new Subscriber Rewards are: GRIME, Skydrift Infinity, Tribes of Midgard, Orcs Must Die! 3, Sims 4: Cottage Living DLC and Black Skylands! More offers, more games, more options for dates. Each week we add more new games that are available with your subscription, and each month we update the selection. Check out the summaries or skip to the list: Gamer Dating Rewards Rewards Game L

Bittersweet, creative and all too human No Longer Home is one of the best LGBTQIA+ games I have ever played. Really, I could just leave the review there, but where’s the fun that? Before going any further, I should say two things: much like the developers of No Longer Home, I am non-binary (my pronouns are they/them, thank you for asking), and I will try my hardest to avoid being overly poetical. As an aside, it made my heart happy to

Dungeons and Dragons: Dark Alliance could have been one of the best games on Game Pass, if it were finished. With Game Pass’ wide customer base, the global success of Dungeons and Dragons, and the simplicity of the hack and slash genre, it really wouldn’t have taken much to produce a competent and successful entry into the Dark Alliance franchise and yet, somehow, Tuque Games didn’t. Drizzt is an iconic and brilliant c

It's July, summer is heating up, curtains are getting closed to game, so its time for a new wave of Subscriber Rewards - We have Roguebook, Scarlet Nexus, Going Medieval and a classic revisisted - Ghosts 'n' Goblins. It's that time again! Each week we add more new games that are available with your subscription, and each month we update the selection. With every first subscription, you get to select a game, gift cards or games to bundle w

June Rewards - The latest new games for you!

It's June, so its time for a new wave of Subscriber Rewards - We have Chivalry 2, Necromunda: Hired Gun, GRAVEN, King of Seas, Grand Casino Tycoon and More. It's that time again! Each week we add more new games that are available with your subscription, and each month we update the selection. With every first subscription, you get to select a game, gift cards or games to bundle with your premium access. This month we've added even more

Last weekend marked the 1 year anniversary of the release of Stardew Valley and Eric Barone, solo developer of Stardew Valley shared his thoughts and achievements and how his life changed from working alone, quietly, to a sudden mr meeseks of the world.

Considering that I had spent the previous 4-5 years in my own little bubble, working alone, doing essentially the same thing every day… and now suddenly to be thrust into the limelight… it was quite the change! I’m happy about it, of course. I mean… it is a weird feeling, at first, to have something that once seemed so distant, so impossible… some pipe-dream that you fantasized about in the dead of night… actually come true. It takes some getting used to, and that’s part of what this last year has been for me.

Eric continues sharing his achievements about the emails, PAX, awards given to Chuklefish (his studio), and constantly making new deals and fixing patches. He even goes on to list a new pc and desk, comparing his old setup of an old machine propped up on a Wii U box. 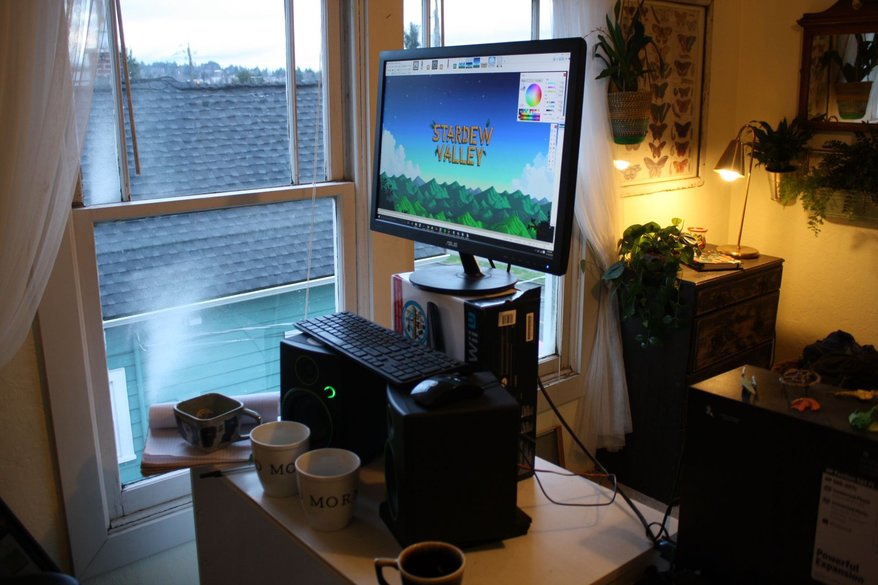 Eric goes on to share screenshots of his development from 2012, a beautiful stark comparison to how it looks today. I mean he even had the game named Sprout Valley.

He even shares with us how he first hand drew the NPC portraits going through iterations after iterations of pixel art until he had a final design.

Eric finishes with a thanks, a thanks to the community and what continued to spur him on.

Anyway, even back in 2012… when the game looked awful… there were people following it and encouraging me to continue. I appreciate that. To all of you who are reading this, who have played Stardew Valley and built an amazing community around it… thank you so much. The mods, the wiki, the encouraging messages, the fan art… I love it, and I’m so grateful and thankful for your support! I will continue to work hard and do my best to create memorable gaming experiences for you all, through Stardew Valley and whatever comes next!

In some ways it reminds us of GamerDating, our process, progress, the success of people getting together and the support from the community to keep building a better service. We can resonate with his thanks. In fact, we have a brand new UI UX in the works, we may just post up a progress through the times when we are ready to launch ;)