Ten Reasons Everyone Should Be and Date a Gamer 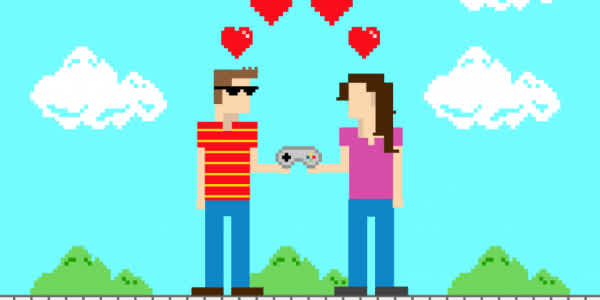 As per usual, there is a lot of talk going on about dating; why one is single, how to not be anymore, who should date who and why seem to be the topics most discussed. The entire thing can get a bit overwhelming when you’re just wanting to scroll through your social media without being reminded of your single-ness.

Before I found my Player 2, this “holiday” felt like it was filled with suggestions that I was flawed: 10 ways to be more attractive for Valentine’s Day! How to snag that guy who is out of your league! Only 3% of Americans singles are worth dating! (according to Business Insider which is obviously a mecca for relationship advice)

That isn’t what we are about here at GamerDating. We are all human (probably) and each of us has things we are working on - those flaws don't mean we aren't worth being in a relationship with. What I think is most important is each of us remembering what is great about us - those are the things your perfect Player 2 will love you for. We gamers have plenty of reasons to be proud.

In this spirit of Valentine’s Day, I’ve put together a list of ten reasons why dating a gamer is awesome. So if you’re one of the singles who is feeling a little on the low side, give it a read, revel in your radness for a few and go put those free messaging days to good use. You never know who you are going to meet!

Gamers know how to unwind.

Life gets complicated and is often littered with days where we just don’t feel like we have gotten anywhere, bringing scary amounts of stress. Gamers can load their favorite game, kick some ass and go to bed feeling at least a little accomplished. Research shows that adults who play games handle the grind of daily life better.

Gamers regularly play, often in fantastic settings that exercise imagination as much as our skills. If you have ever created a character for an MMO you know exactly what I’m talking about. According to research, play helps adults boost creativity, improve brain function and strengthen relationships.

Have you ever dated someone who can’t seem to make a decision on their own? It is a massive turn off. We gamers constantly hold a hero’s fate in our hands - deciding on dinner really shouldn’t be an issue.

I know it is easy to get caught up in some of the headlines about some gamers who do some pretty crappy things to other people but they are, by far, the exception, not the rule. Many games put us directly in the mind of another person (or creature) and walk us through their experiences and mindsets, introducing gamers to many different ways of thinking. Research shows that some games even improve our desires to help others.

Researchers have shown that playing games like Starcraft makes the gamer more “cognitively flexible”. Players are more able to switch their thinking between two different concepts and juggle multiple high-level concepts at once.

Alright, I know some of you are saying, “WTF, ever seen a rage quit?” Yes, yes I have. Good gamers will push their limits and understand that they can’t always be the top of the heap, but will keep trying.

Gamers have something to look forward to.

Whether it is a new level, the release of a new game, the next console, or gaming event - we gamers are surrounded by things to be excited about. This translates into lives that are way more fun.

Gamers can gamify anything - and it helps!

For those of us who aren’t up for gyms, the WiiFit system changed everything. Have you ever used an RPG life organizer? Gamers can use the tactics of our favorite entertainment to move our IRL hero through the hardest of of challenges. The gaming industry is constantly thinking up new ways to integrate with our lives, using the same principles that keep us playing our favorite games to help us better ourselves.

There is more and more research coming out showing that video games are great for fending off the effects of aging on the brain. Playing games has shown to improve memory, reasoning, cognition and executive control processes - abilities like planning, multi-tasking, and scheduling - that typically decline as we age.

In 2013, German researchers showed that playing 30 minutes of Super Mario 64 a day for two months was enough to see a rise in gray matter in the right hippocampus, right prefrontal cortex and the cerebellum. These are the areas responsible for spacial navigation, memory formation, strategic planing and fine motor skills in our hands.