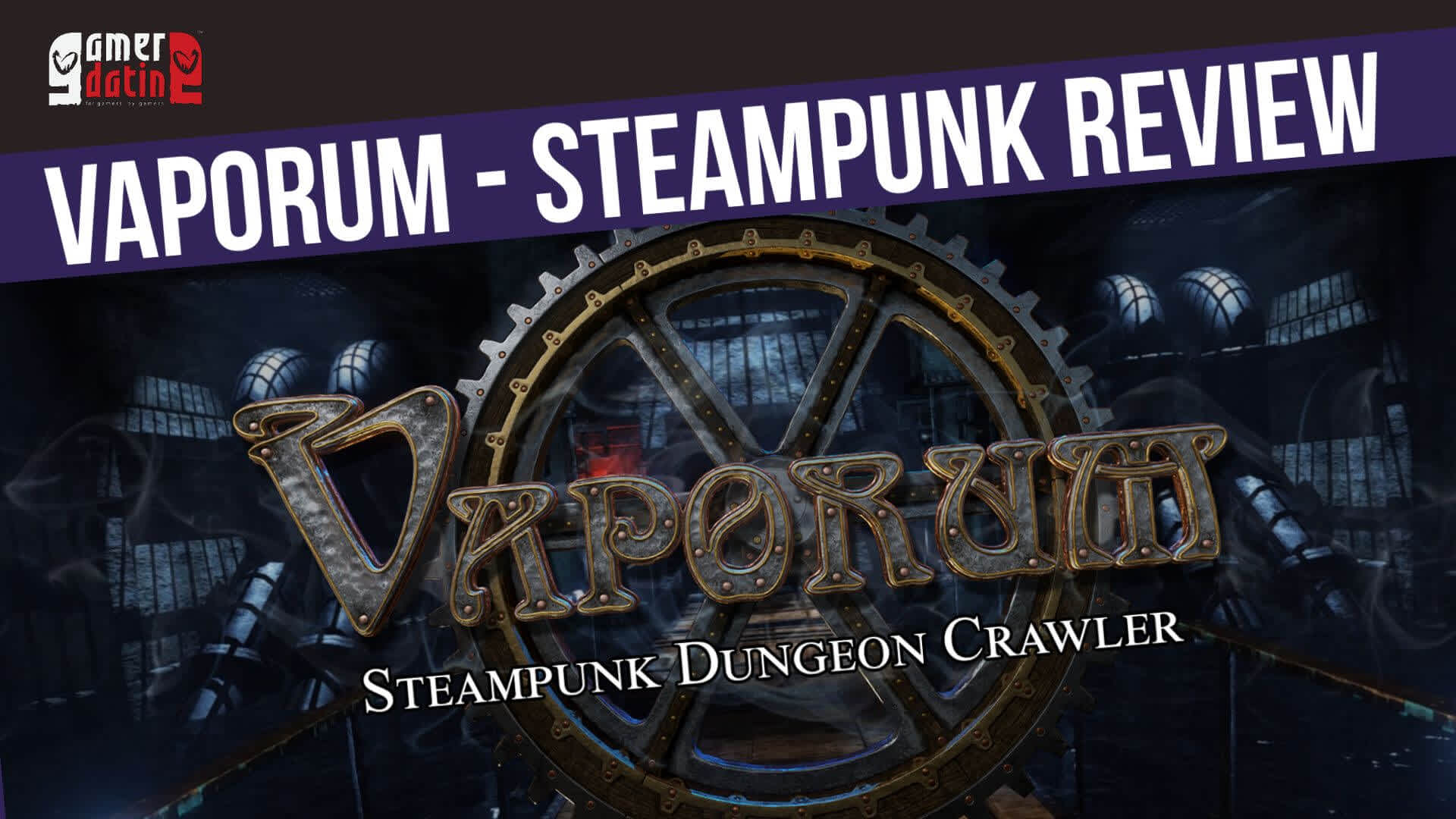 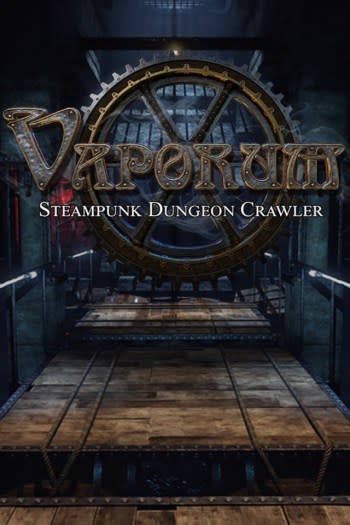 Dark, grimy and constricting, take a break from all of the problems of real life in this polished dungeon-crawler.

All joking aside, the rather well-timed, in the UK at least, release of Vaporum: Lockdown proves there is still life in the niche dungeon-crawling genre.

Eschewing the usual confines of the dungeons from which the genre gets its name, Vaporum: Lockdown is a prequel to 2017’s Vaporum and, as such, requires no previous knowledge of the series. Where other dungeon-crawlers may have you exploring dark stone tunnels or crypts full of undead monsters, Vaporum: Lockdown instead embraces the steampunk aesthetic and has you explore a warren of tiled, pipelined corridors where the bloom of electric lighting reflects from almost every surface to some degree. Visually, this game is a delight to look at and draws immediate comparisons with Bioshock. 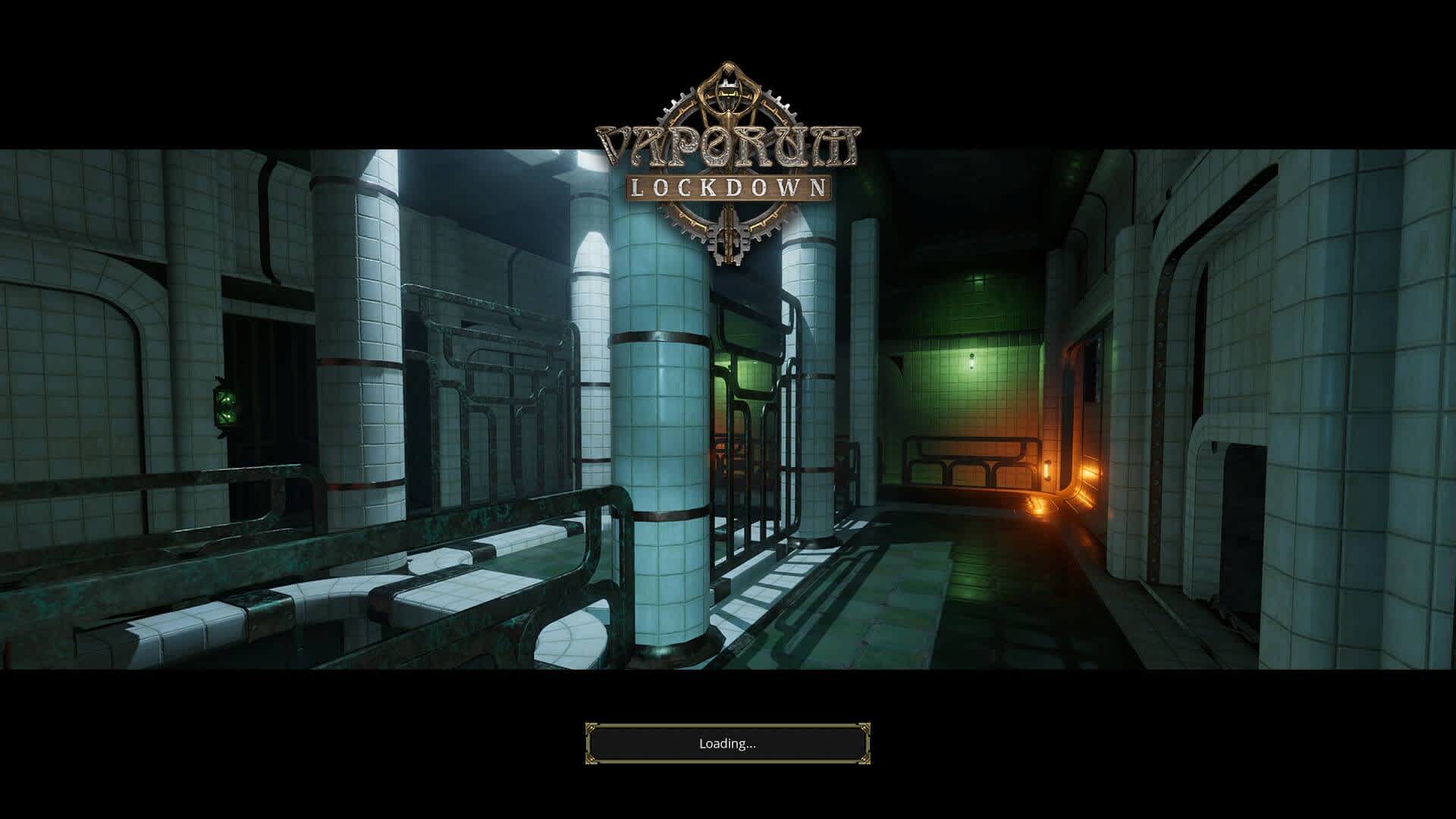 I think Hydroponics, with its white aesthetic, was my favourite area to explore.

Level elements are clearly distinguished (once upping the brightness on my monitor, at least) and the creature design is spot on; whether it is mutated rats, errant drones or twisted test-subjects, there is something to delight any fan of gorgeously-modelled NPCs. Everything that you are intended to see is distinct, eye-catching and well-rendered. The numerous hidden switches, puzzle hints and breakable walls on the other hand are not, and will require some careful exploration on your part if you want to a) progress at certain points or b) find everything Vaporum: Lockdown has to offer. The eye for detail presented here is impressive and each different level of the tower you are trapped in during the titular lockdown is visually distinct, whilst also retaining enough unifying elements to construct a believably connected ‘dungeon’.

It is a shame, therefore, that this attention to detail didn’t carry over to the sound design. At best, I would describe it as serviceable, at worst as headache-inducing or distracting. The music is atmospheric, full of danger and warning, whilst the ambient sounds are layered in such a way that you will generally be able to hear, and identify, any NPCs approaching you before they become a problem. With the exception of some sound effects, the audio is good but ultimately not memorable. Believe me when I say that those effects that have stayed with me, have stayed with me for the wrong reasons.

Something about the sound used for fire hits just the wrong pitch and lingers in the ear far longer than it ought, resulting in several puzzles that left me with a headache entirely from the audio effects alone. Several of the traps found throughout also made use of similar headache-inducing sounds that, admittedly, did encourage me to solve the puzzle/pass through the area as swiftly as I could. I should, however, point out that I do have sensitive ears and am prone to sound-related discomfort, and that the game does have a decent audio slider system for tweaking it to your preferences; I just couldn’t find a balance that prevented the headache. 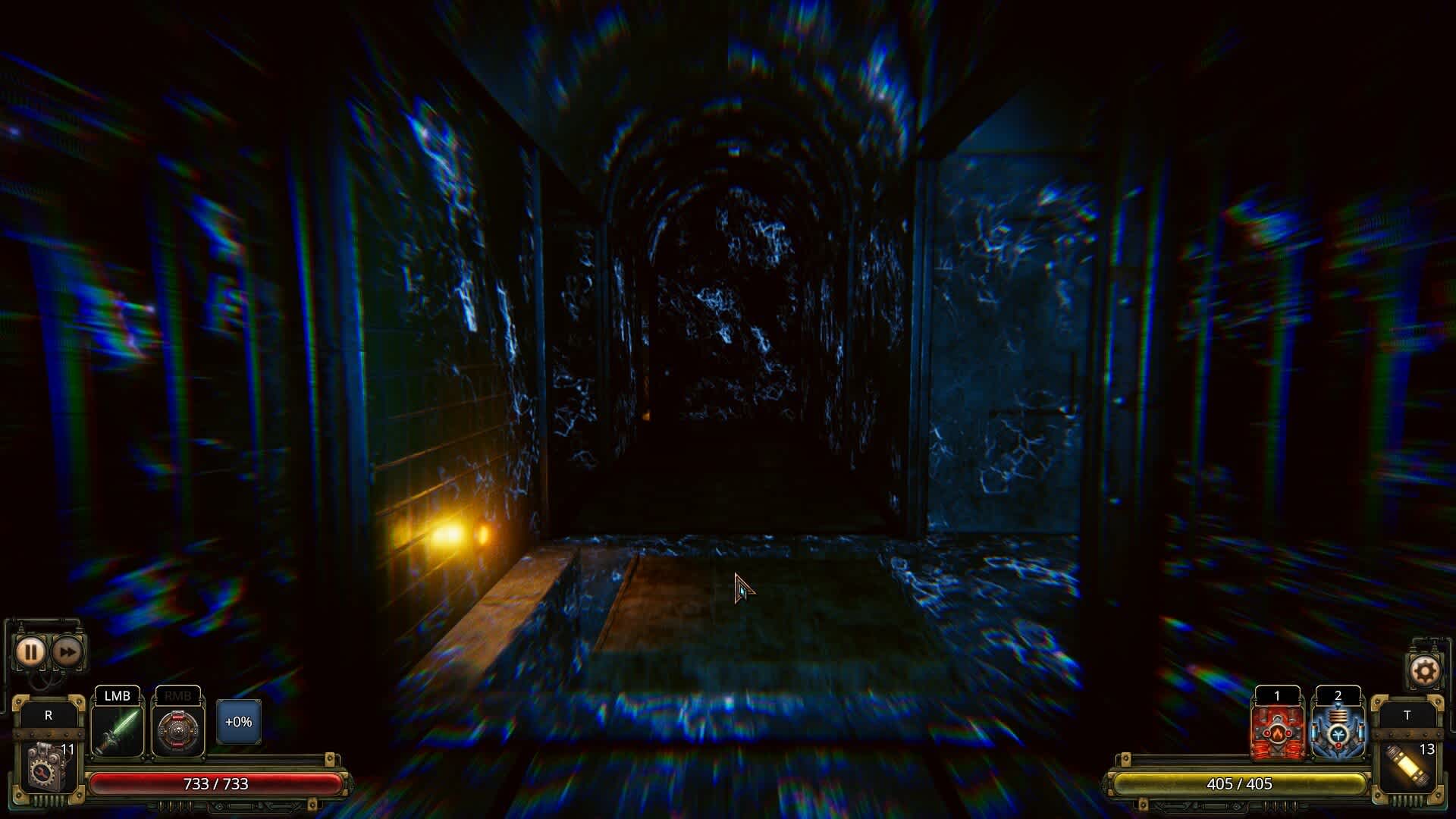 This is the one exception to my enjoyment of this game’s visuals. It’s a nightmare to play through this section.

Fortunately, the sound design was the one low-point of the user experience for me. The UI itself is wonderfully minimalist, allowing me to fully immerse myself in the world and check things like health, ammunition or remaining energy only when I wanted to. It’s also easily readable, both in terms of glancing at it for the pertinent information as well as in terms of font size, something that is customisable via the in-game options. You can also turn things like headbob on and off and, for those hardcore veterans of the genre, the game even lets you play without the map, meaning you’ll have to make your own as you go, as in the days of yore. I… well, I didn’t do this and found myself using the in-game map a lot. Fortunately, it’s easy to read, lets you check things on other floors with a couple of clicks and, most importantly, allows you to add a note if you encounter a puzzle you want to return to later.

Believe me, you will be returning to places. If you don’t like backtracking in video games, you might want to stay away from this one as there is a liberal amount of it. I have mixed feelings about the backtracking on display here; on the one hand, the narrative has been constructed such that it feels organic and justified (in a vaguely metroidvania way) but on the other hand, the player character doesn’t move quickly, it’s easy to get lost if you aren’t checking the map after every room and, if you’ve passed through an area more times than the plot expects, there is an eerie emptiness to the dark chambers. Enemies will only reappear when the game requires you to backtrack and you can usually tell if you’ll encounter something on your way back through environmental clues. 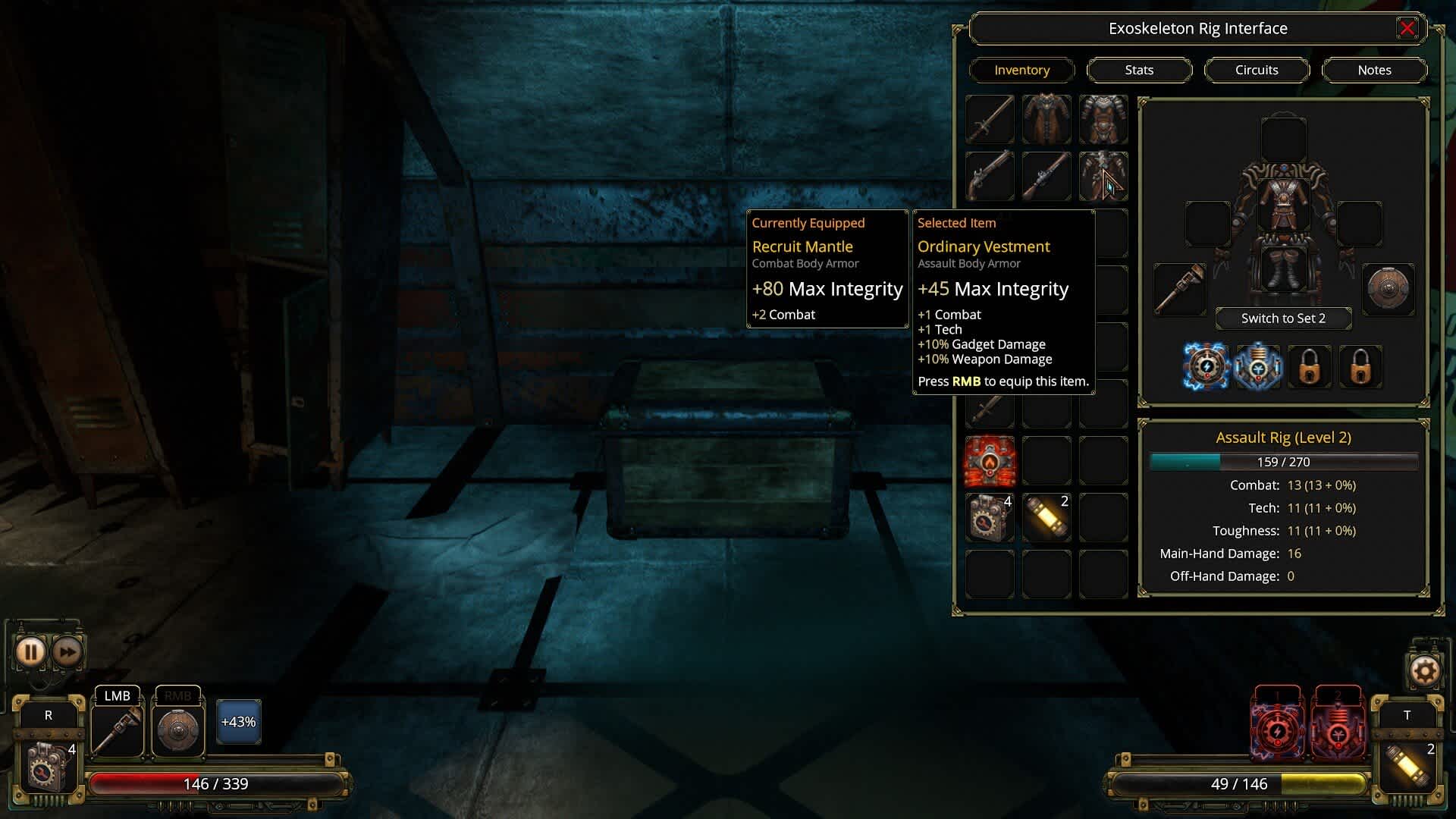 Look at all those numbers!

It is, of course, impossible to talk about enemies in a video game without talking about the combat in said game. Combat here is simple, if tactically challenging at higher difficulty levels. As this a grid-based dungeon-crawler, you can attack in, and be attacked from, four directions by enemies that follow the grid as you must. This produces a predictable movement pattern that, combined with easy to read animations, can be exploited when facing small numbers of enemies. The actual mechanics of fighting for survival are tied to weapon stats.

Each has a cooldown that affects all your weapons (so no switching out to refresh cooldowns), as well as a range (displayed in tiles), ammunition or energy cost (for ranged weapons) and, of course, a damage number. Throughout my exploration I found many weapons with additional abilities (typically these would apply an elemental effect for increased enemy cooldowns, decreased damage taken or damage over time, for example) and I would highly recommend taking the time to find these weapons and the armour pieces scattered throughout the world. This is definitely a game for people who like to tinker with stats; my build revolved around dealing extra damage based on missing health and lowering the damage output of enemies, for example.

Character progression is tied mostly to gathering fumium, a rare element being used in experiments taking place in the facility the game is set in. Fumium is generally gained from defeating enemies but I found a rifle that gave me a small amount of it whenever I hit an enemy and items are hidden throughout that permanently increase one of your base stats. Whenever you reach a certain amount of fumium, you gain a circuit with which to upgrade your exorig (your armour). The whole system is simple and clean, each rank you put into a skill gives you a bonus, until you max out that skill. Fortunately, I realised that the last rank is a choice of two options that you will only be able to make once (meaning you’ll only be able to gain the benefit of one of the two perks) before I clicked accept, but that should be something to bear in mind on your own playthrough. 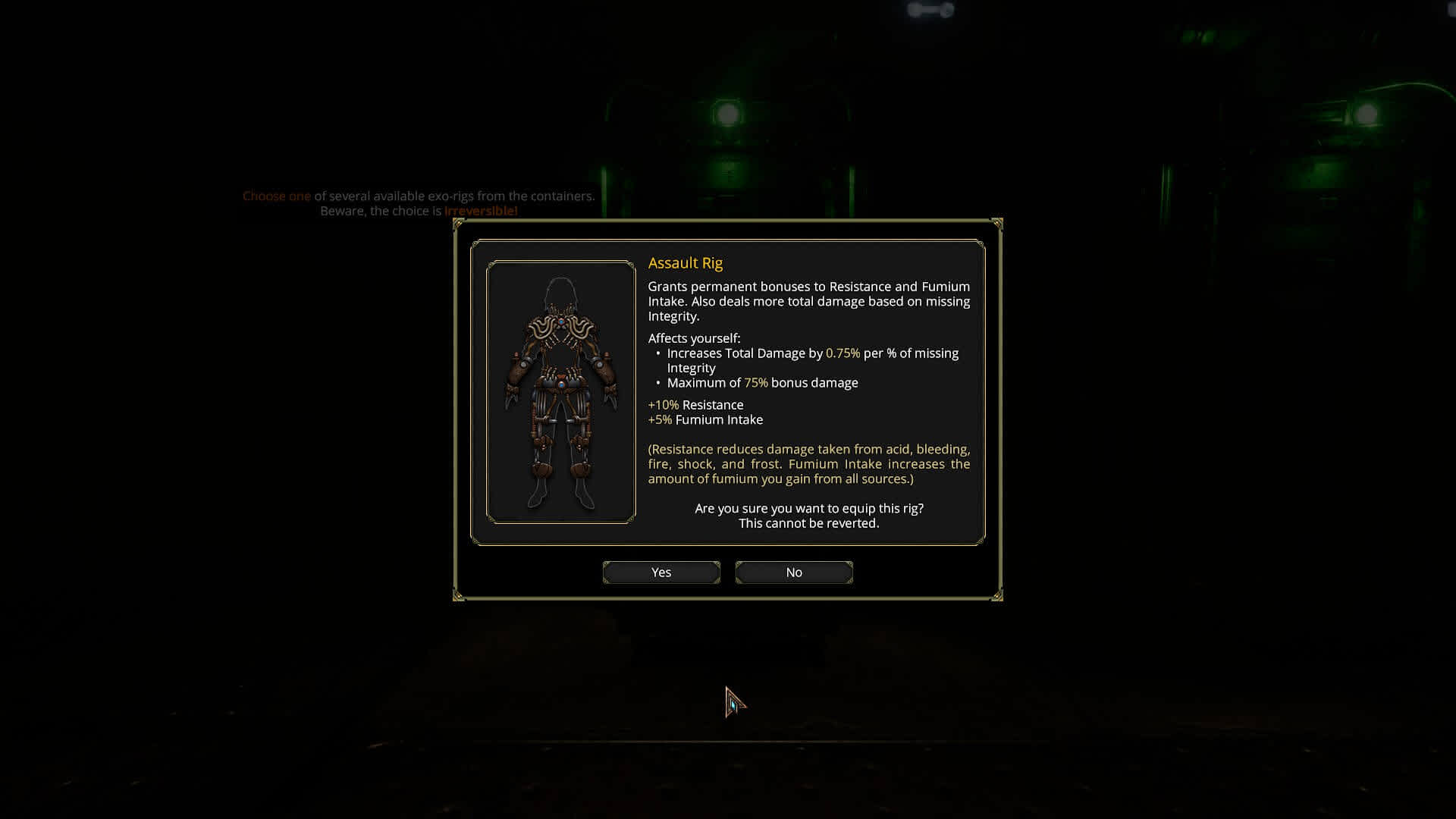 At the start of the game, you are required to choose your base armour. This will affect the rest of your gameplay in minor ways.

Story progression is tied, as far as I could tell, exclusively to map progression and not character level, and is pretty well done, if not terribly original. It won’t take long to realise that it’s based on experimenting with something that shouldn’t be experimented with, and is delivered through first person cutscenes (with some pretty good voice acting and camera direction), as well as through notes and audio diaries scattered around the environment (some of which you’ll have to hunt for if you want the full picture). Each is well written and brings the author to life, letting you get a feel for the disparate personalities trapped in the tower before things went south, and some provide clues about certain enemies or puzzle solutions. Even better, however, is the ability to re-read/listen to them at will, although you do need to know which in-game character wrote the entry to make sense of the game’s indexing. Overall, though, the writing brings this small slice of steampunk, morally-grey science to life pretty well. 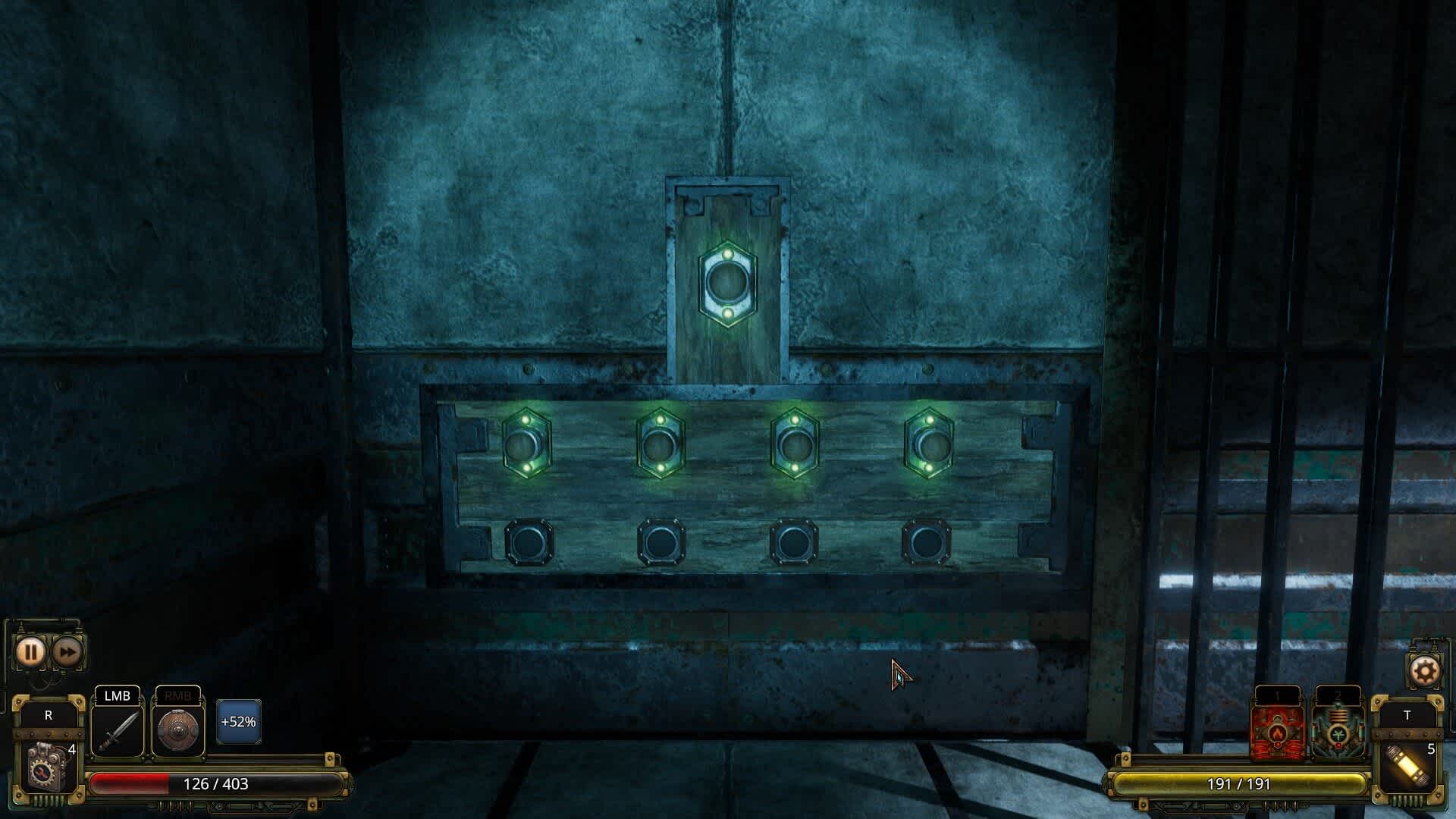 You won’t find any overt solutions to the puzzles here, all I can recommend is pay close attention to the environment and read the notes you find carefully.

I’m happy to say that I didn’t encounter any bugs during my time with Vaporum: Lockdown, none that I noticed anyway. The main things that I felt could do with more polish were the puzzles, but this might be something that is a genre-staple, and not specific to this game. With the limitations, and simple mechanics, of the genre, the puzzles here are little more than push buttons in the right sequence, push blocks around, or time your dash between traps perfectly. Occasionally, pressure plates are involved (these come in two varieties: one you can weigh down with anything and on that you have stand on/weigh down with a block) but the complexity here largely comes down to the length of time it takes to solve a puzzle. Having figured out the solution to a puzzle in the latter half of the game (complete with note-taking), I reloaded a save to try it again and, even with the solution, it still took over five minutes for me to solve. This is also where the headache came from; one puzzle involves three flame turrets and the cacophony from all three was such that I decided to skip it after twenty minutes of both button pushing and block moving.

All that said, Vaporum: Lockdown is currently £14.99 on Steam and I feel that’s a good price. Depending on your desire to find everything the game has, it’ll likely take you around 10–15 hours (I’m not getting any more specific than that for my playtime), possibly more if you are intent on finding the myriad secrets yourself. The puzzles are, mostly, entertaining to think through and the world itself is a treat to explore and learn about through the environmental clues of hidden diaries and propaganda posters plastered everywhere. 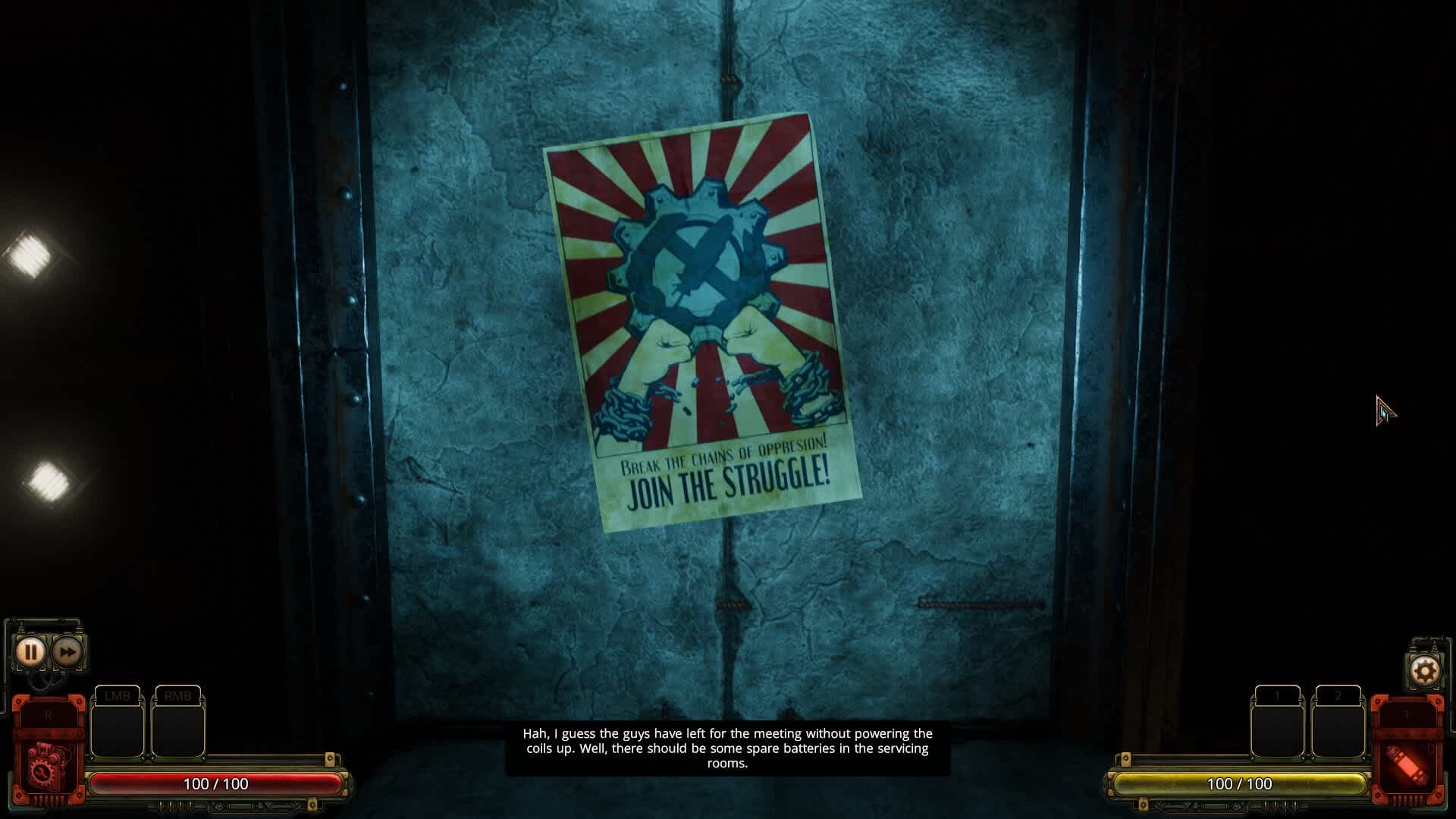 Each area has its own spin on propaganda and they’re usually worth checking out.

Would I recommend this game? Sure, there is enough imaginative world-building, well-delivered lore and beautiful environments that I would, but with the caveat that it is slow-paced, requires a lot of backtracking and does feel a little padded towards the end. It is also probably not for you if you want puzzles that take only a few minutes to solve.