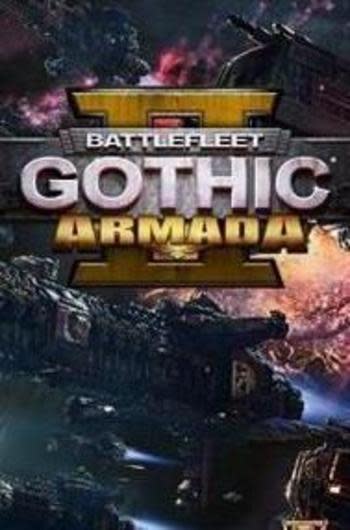 As a twenty year fan of the Warhammer 40k universe, It was with great pleasure and excitement that I was recently offered the chance to write a review on the upcoming release of Battlefleet Gothic: Armada 2. Whilst I never had the pleasure of playing the tabletop version of Battlefleet Gothic, the upcoming PC game is, as expected set in the same rich, gritty dark and terrifying universe as the parent tabletop miniature wargame from which it evolved.

Starting with the tutorial I was immediately struck by the sense of vastness to the field of play. You have a warship (or several, later on). In the 'immediate' area (is there such a thing in the vastness of space?) there is some sort of gargantuan structure surrounding the area of battle. I'm not sure what it is, even with my familiarity with the setting, but it wasn't necessary; the vastness of this structure dwarfing your warship, a huge vessel in itself gives you a firm idea of just how big the Warhammer 40k universe is and illustrates just how small and insignificant human life is in this setting. I won't spend too much time talking about this, but it is an important and subtle point being made about the setting the game is in. Life is cheap, war is everywhere and worse than Hell. 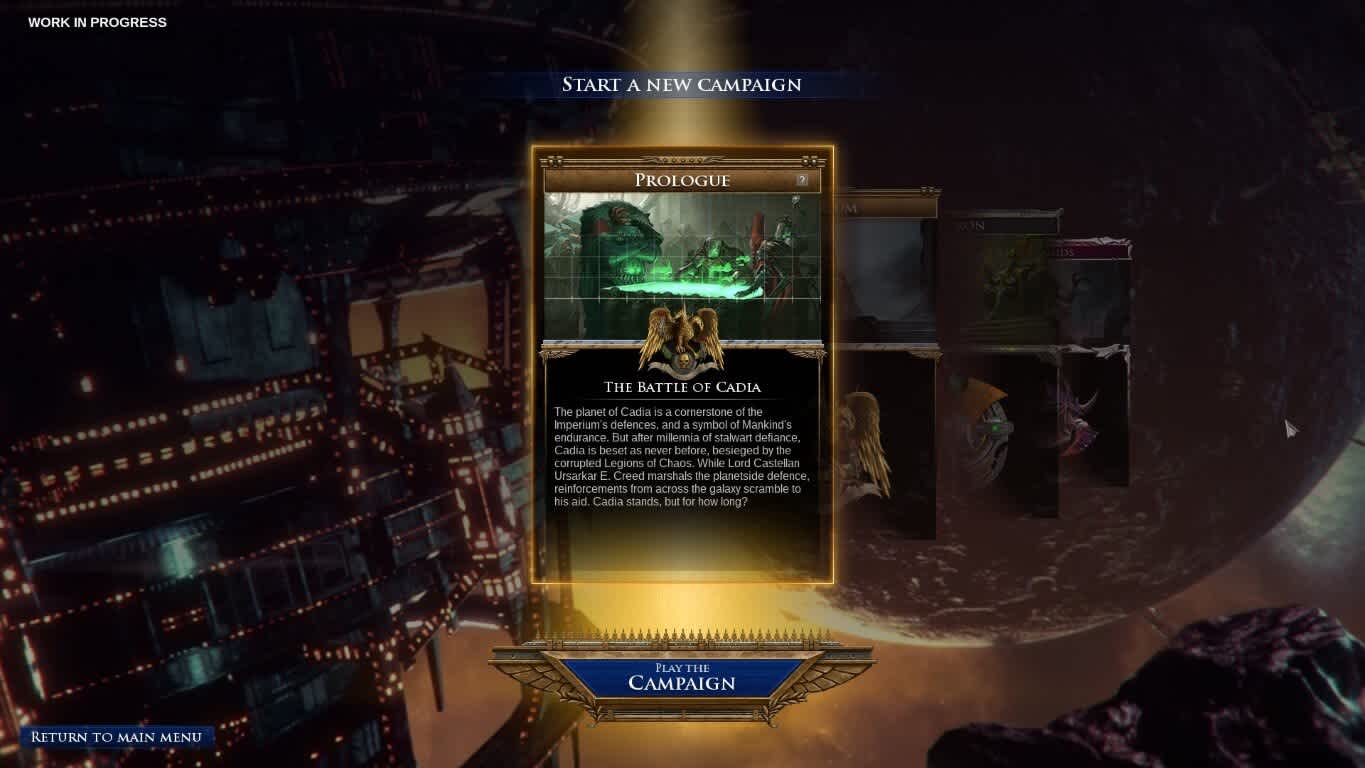 The campaign medu is tastefully organised into trading card like sections.

The game starts as you might expect by teaching you the basic manoeuvres and actions that can be performed by one of your ships. The ships have 4 basic modes of movement which are – standard speed, 'burn retros' (shut off the engines), perform a sharp turn and full speed ahead. The functions here appear simple, but I could tell there was a strategic nuance to them which would become apparent through tactical planning and timing when commanding your ships, especially when under fire and time is against you to either destroy the enemy ship or get your own to safety.

You might imagine that a battlefield in space would be relatively devoid of features, and whilst it's fair to say that the battleground is a little more bare than traditional land based war games, there are still interesting terrain features present in game that are both helpful and harmful such as asteroid fields that can hide your ship from the enemy, but cause damage to the ship's hull as you fly through, and gas clouds that conceal your ships from the enemy unless they perform a scan of the area. 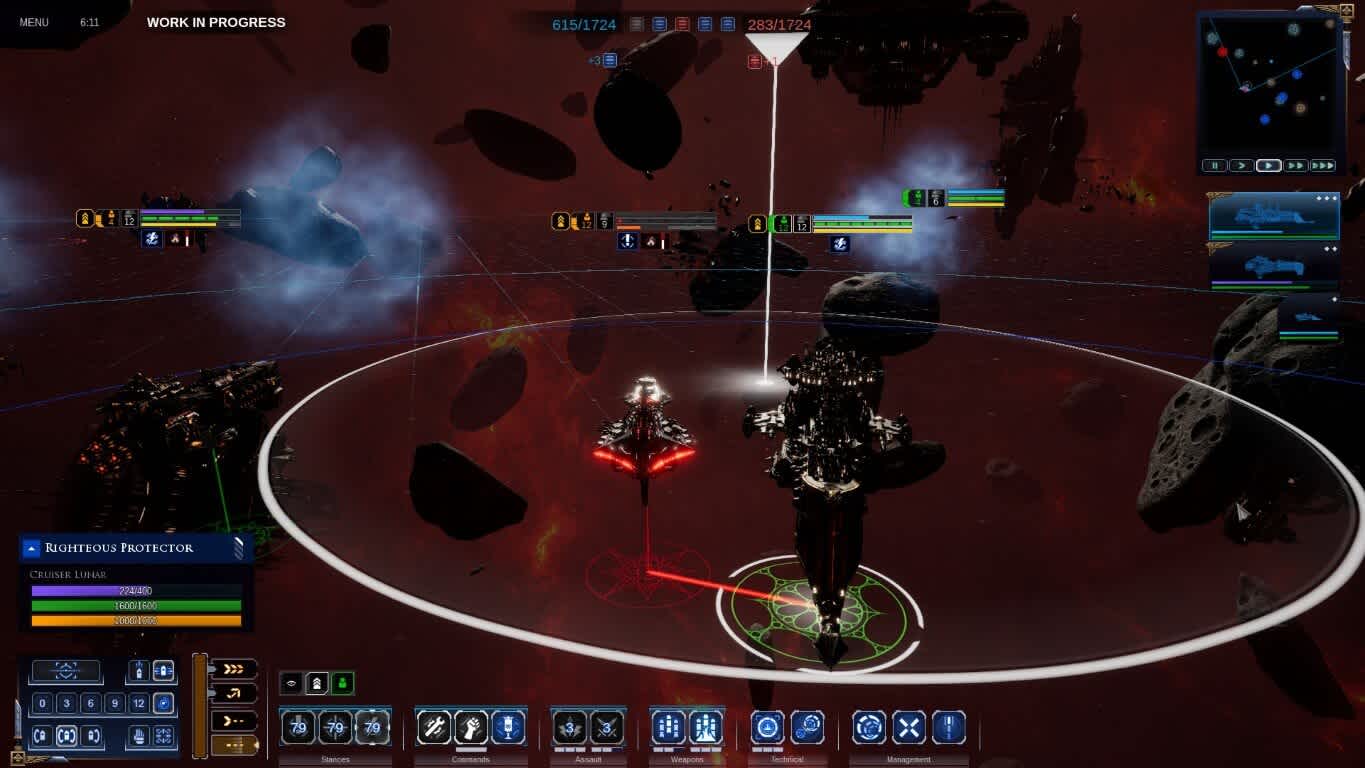 A common theme in many strategy games old and new, strategy points must be seized to control areas of space on some battle maps.

The first enemy ship came into sight and as expected of a tutorial was something of a pushover. Another thought that struck me, was the similarity in the pace of gameplay and the tactical style between this and naval combat in games such as Empire: Total War and Napoleon: Total War. Ships move relatively slowly to the player's eye by comparison to land based troops in most conventional strategy games, and to render an enemy ship defenceless or destroyed using a single ship can take quite a bit of time. From this, I could tell this was a game that would require some patience from its players in order to win battle as cleanly as possible and with the fewest casualties possible.

I was playing the second mission of the game for quite some time. As I mentioned, combat moves at quite a slow pace, yet somehow maintains tension throughout the engagement. On completion of this I was presented with a long and beautiful cut scene, and I realised that I had only just completed the prologue! 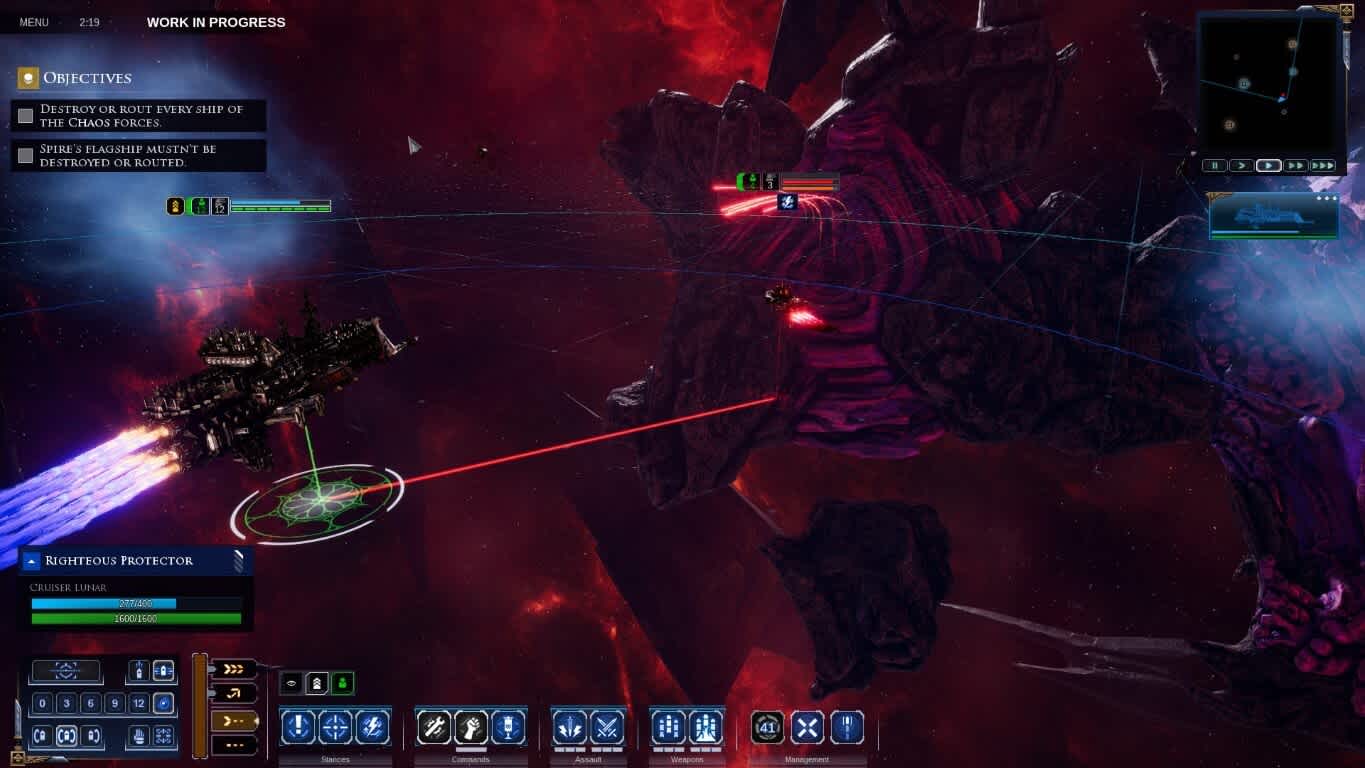 I was starting to realise there was far more complexity to controlling the ships in battle than I had first thought, and that far more ships would be present in battle than I had anticipated. This was both exciting and daunting. The tutorial had given me a good basic knowledge of moving and fighting with various Imperial warships, but I was left in the dark as to the finer points of certain special abilities, and where it was appropriate to use them. Further, I wondered how much these abilities would influence the outcome of battles as when I had used them in the prologue they had not seemed to have had an effect worth writing home about. For all my doubts about my ability to command more than a few ships at a time to any great effect, I was excited at the prospect of seeing huge space battles unfolding before me and pressed on into the main part of the first campaign : The Imperium.

Battlefleet Gothic: Armada 2 offers campaigns with the Imperium, Necrons and the Tyranids, and in Skirmish/Battle mode you can play anything right off the bat. 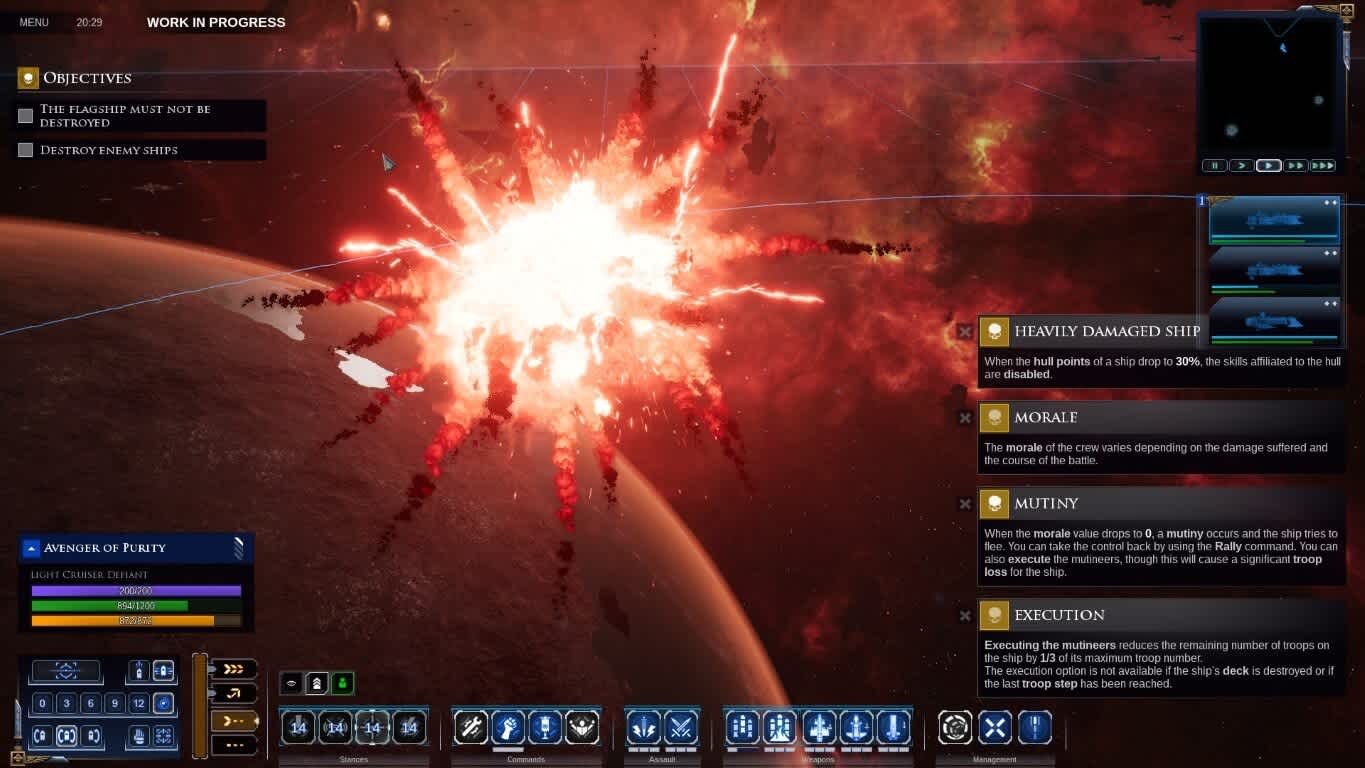 In space no-one can hear you scream

Leaping into the Imperium campaign the cut scene details a mighty invasion of the 'fortress world' Cadia. For those of you familiar with other games with the 40k setting, I will point out here that the storytelling does an excellent job of making the forces of Chaos seem terrifying without ever showing us a single daemon or suit of spiked power armour. There is a sense of the unknown about the invading navy, and the fact that nobody seems to know exactly what they're up to at any given time makes them seem so much more threatening than in other computer games set in the 40k universe(let's face it, Chaos have been the main antagonists in most of them). The scene follows a female commodore leading her 'small' fleet through the space just outside of Cadia. She launches what she soon comes to realise was a suicidal attack against the enemy forces. The ship's computer reads a damage report, the last part detailing that the crew has sustained an estimated 65,000 casualties across all decks. This drives home hard that the ships that appear small on screen are in fact enormous machines of war with screws equivalent to the population of a small city, and the lives of those aboard are like so many candles easily snuffed out with a few well-placed shells from the enemy vessels. 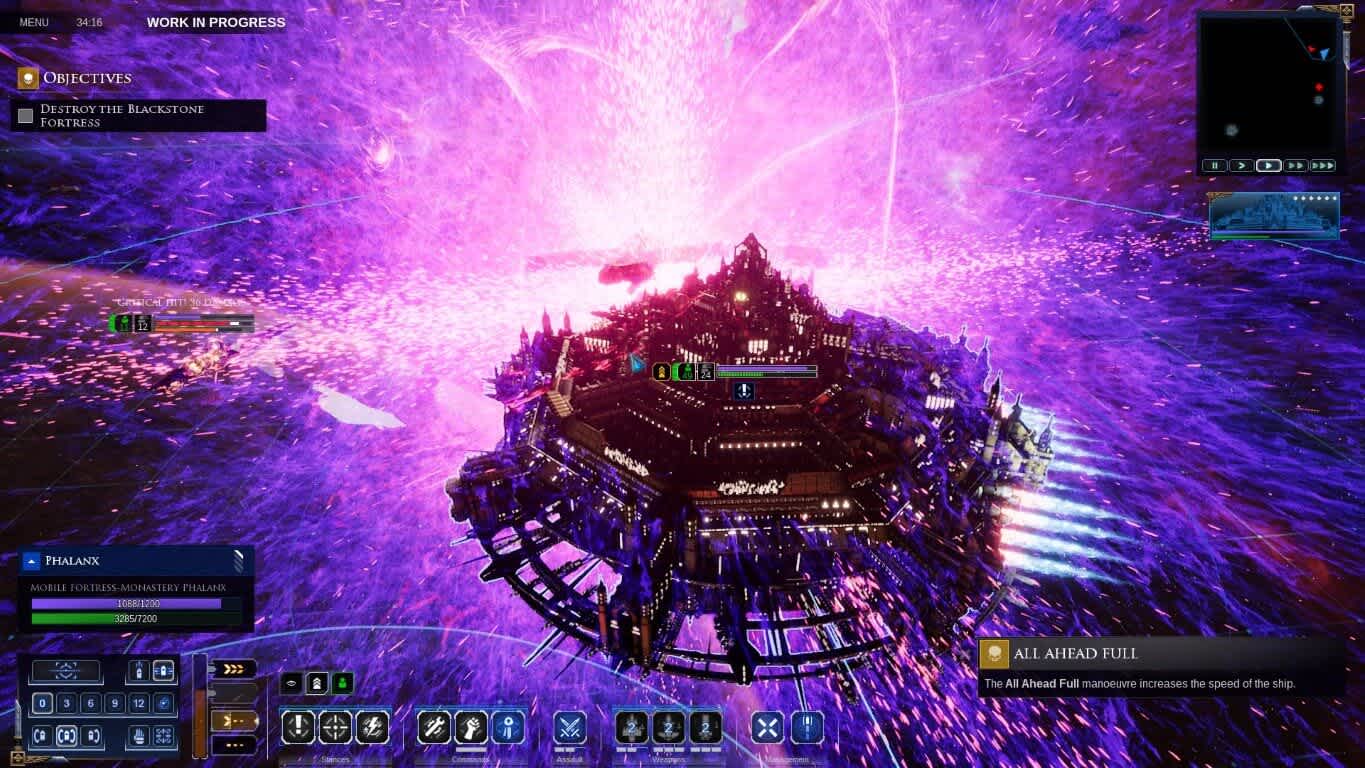 An enemy vessel detonates with cataclysmic forces The Phalanx rams it's gargantuan bulk home into it's black heart.

Whilst the defenders of Cadia struggle to stem the tide of Chaos pouring from the Eye of Terror (a portal to the 'Immaterium'; a Hell-like dimension where anything is possible, and the realm of daemons) the story shifts to the flagship of one Admiral Spire, an Imperial Navy commander who has been trapped in the Immaterium along with his crew for 800 years in pursuit of none other than the superhuman evil leading the invasion – Abaddon the Despoiler. As his ship emerges from this dimension he displays mild surprise that he is now almost a millennium out of his own time and resolves himself to continue his quest to destroy the 'Arch-Traitor' as though 800 years in Hell-Lite was a minor inconvenience. I liked him immediately.

Almost as soon as he exits the Immaterium Spire spots a small (by comparison, it's still a huge vessel) Chaos ship, the commander of which eagerly declares he will take Spire's Skull. Spire calmly identifies himself and his ship and says '...And today I will be your death.' probably whilst pouring himself a brandy or some 41st millennium equivalent. Upon the destruction of this impudent heretic three more Imperial ships join Spire's fledgling fleet and together they destroy several more patrolling Chaos cruisers securing the Belisar planetary system for the Imperium. Spire's crusade to cleanse Cadian space of the Chaos menace begins... (I can tell Dan was really getting into playing this game – Ed)

Upon completion of the first mission, I was taken to a turn based strategy map not dissimilar from that of Epic 40k : Final Liberation (for those of you who may remember it!) or a Total War title. I realised I'd just been introduced to an entire new layer of Battlefleet Gothic: Armada 2 that I hadn't even realised was present through the previous few hours of gameplay. From here you can manage the fleets you control, repair and upgrade ships and manage (and annex) other planetary systems. Your fleets have an upkeep per turn offset against planetary systems currently under your control. You can deploy minefields to defend systems, set up networks through which ships and resources move safely. 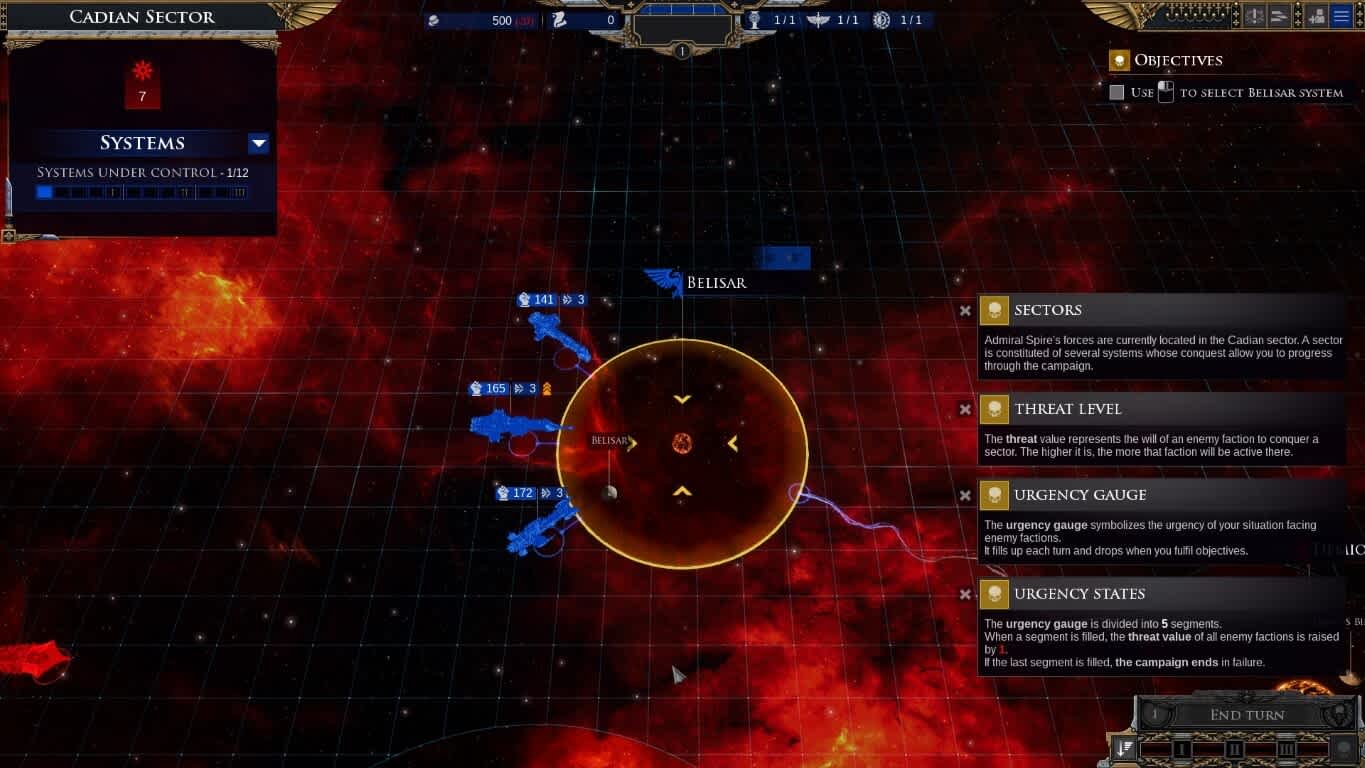 The Belisar system is liberated, and Admiral Spire's crusade begins.

There is a layer of complexity to the campaign map that will appeal to any connoisseur of grand strategy games. For me, the interface felt a little clunky. I can't quite put my finger on why. I found myself squinting at various values and options in the highly detailed menus wondering what I was supposed to be doing despite the numerous tutorial messages coming up at the right of the screen. 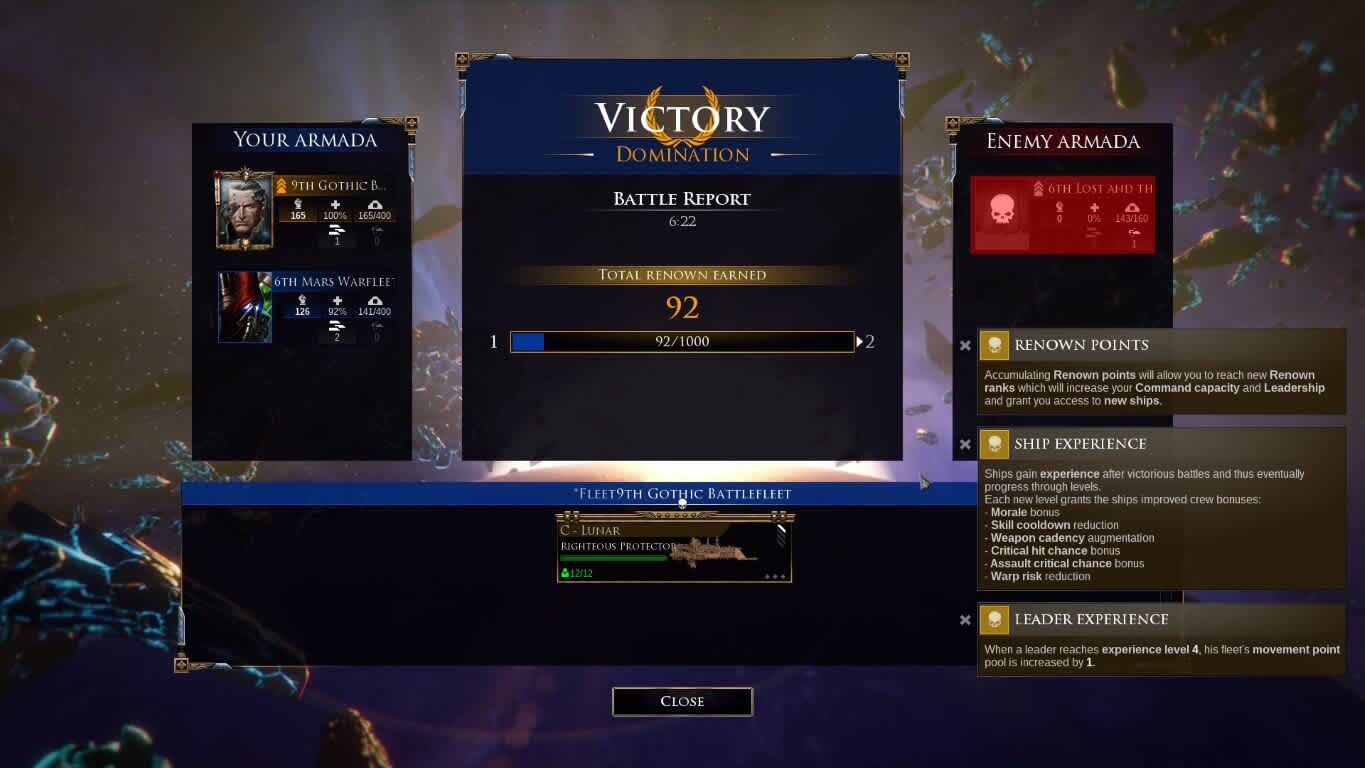 Experience is earned through combat, bringing an RPG element to the game.

Regarding bugs, the game even in beta is incredibly tight. There appear to be no noticeably hindering bugs during gameplay either in battle or in campaign. The only bug I noticed was the aforementioned save-game crash, but to be fair that's a biggy. In fairness, we were informed of a save-game bug in the beta notes (saving games with '!' in the file name will crash them) but considering how smooth and tight the game is overall I have no doubt that the developers will get that ironed out before release. 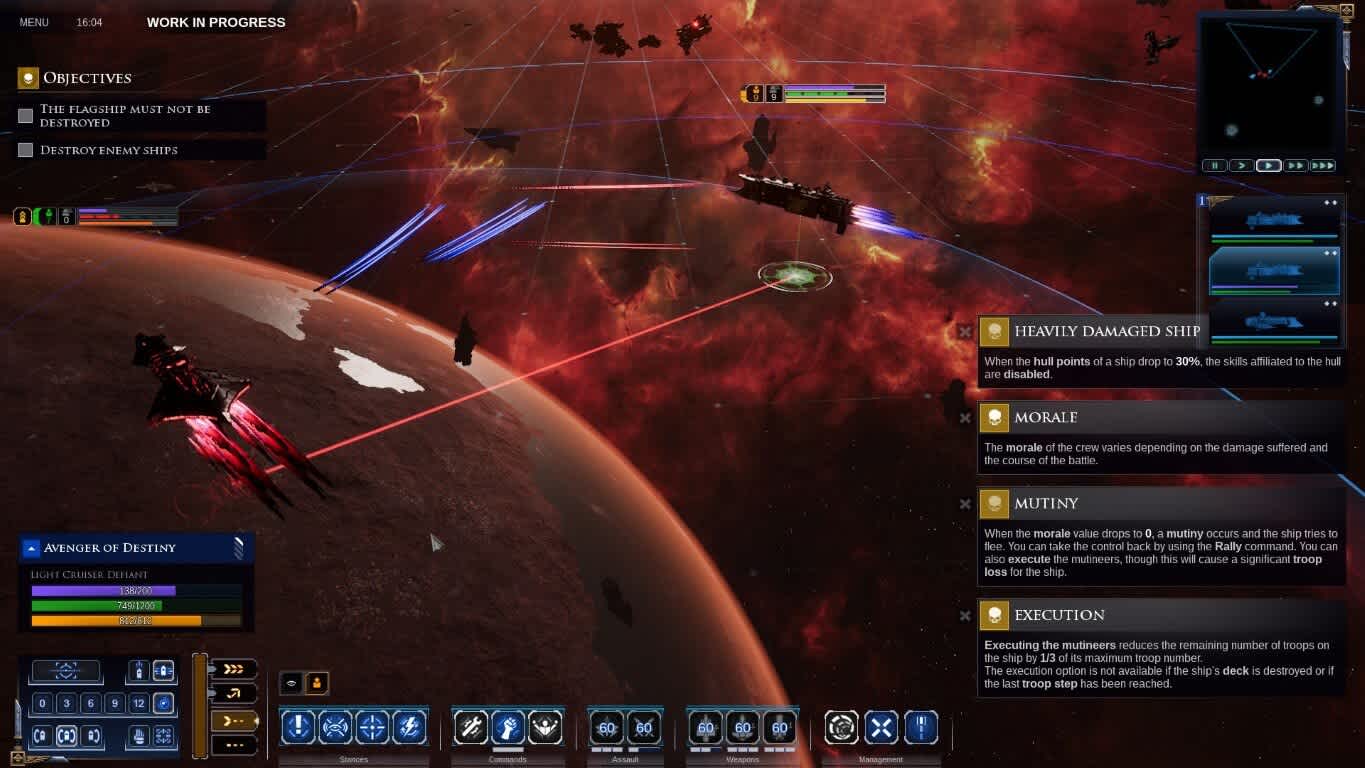 Hopefully the bugs won’t spoil too many new players experience.

The music was thematically appropriate. In particular when you hit the in game battle soundtrack. It's EPIC. Music, at least for me is a hugely important part of any computer game, be it a horror game, a strategy game or an action shooter.

As gamers, we all have memories of our favourite computer game soundtracks, from the police station main hall in Resident Evil 2, to the foreboding tune ('Destiny' by Jeff Van Dyk) that played before a battle in Medieval 2: Total War. Music is a critical part of any game aiming to be a masterpiece and Battlefleet Gothic: Armada 2 certainly steps up to the mark.

If you are a fan of the Warhammer 40k universe, a fan of the Battlefleet Gothic table top game, or a fan of grand strategy games, Battlefleet Gothic: Armada 2 is a must. If you're a fan of all three of these then to fail to buy it is a crime against the Imperium and you can expect a fleet of Inquisition warships knocking at the door! (Not really, just buy it if you love 40k, it's awesome.)