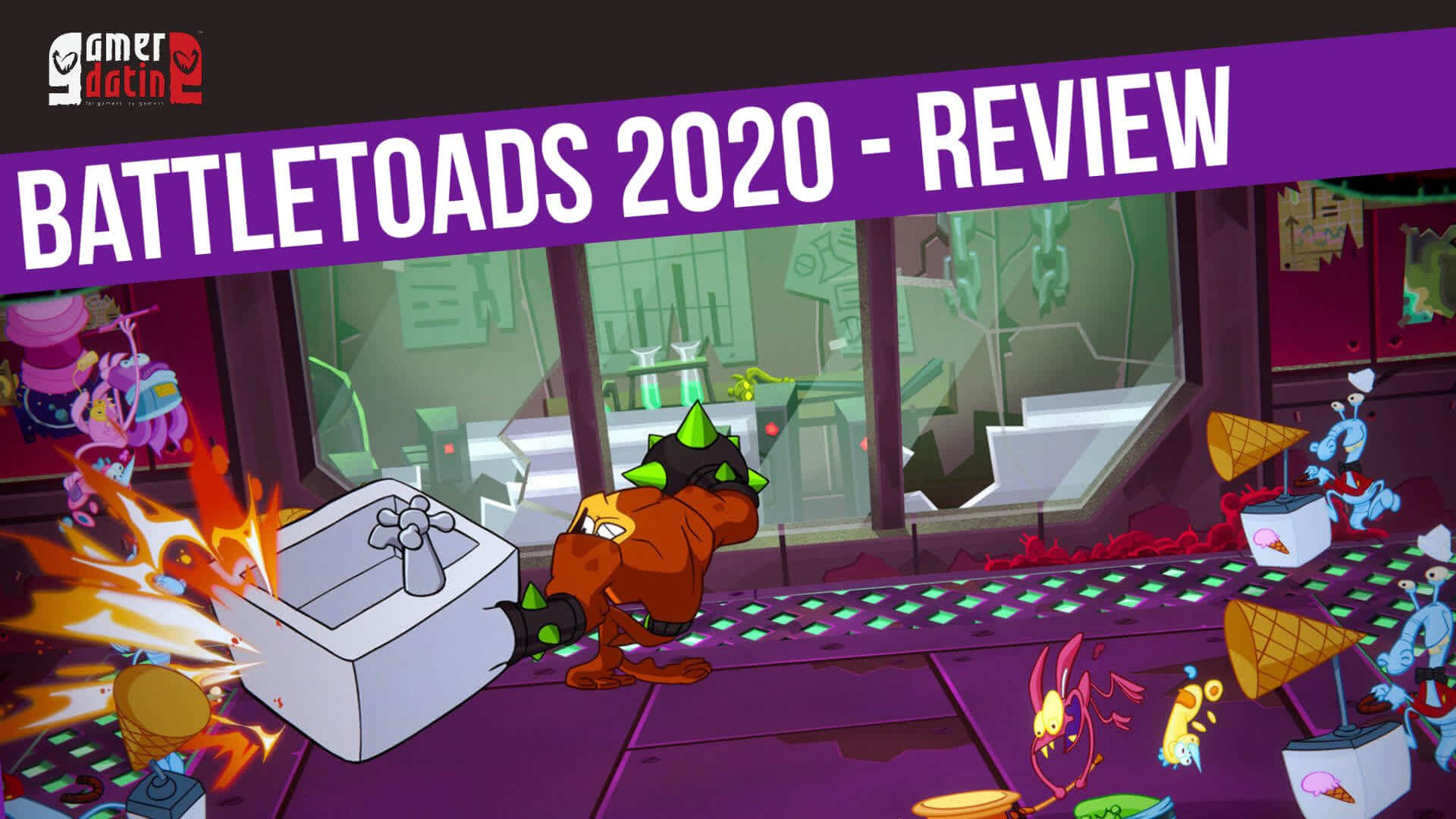 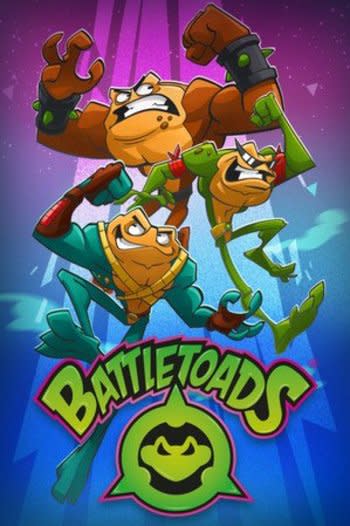 With a hop, skip and jump into the absurd, Battletoads is the game we need right now.

And really, why wouldn’t it be? At its core, this is a very simple game and that has allowed the developers to polish it. The UI, such as it is, conveys all it needs to: remaining health, remaining ammunition and (if you are doing poorly) the respawn time. At any point, you can check the top of the screen to see how each toad is doing and, with three playable toads, that is incredibly useful. 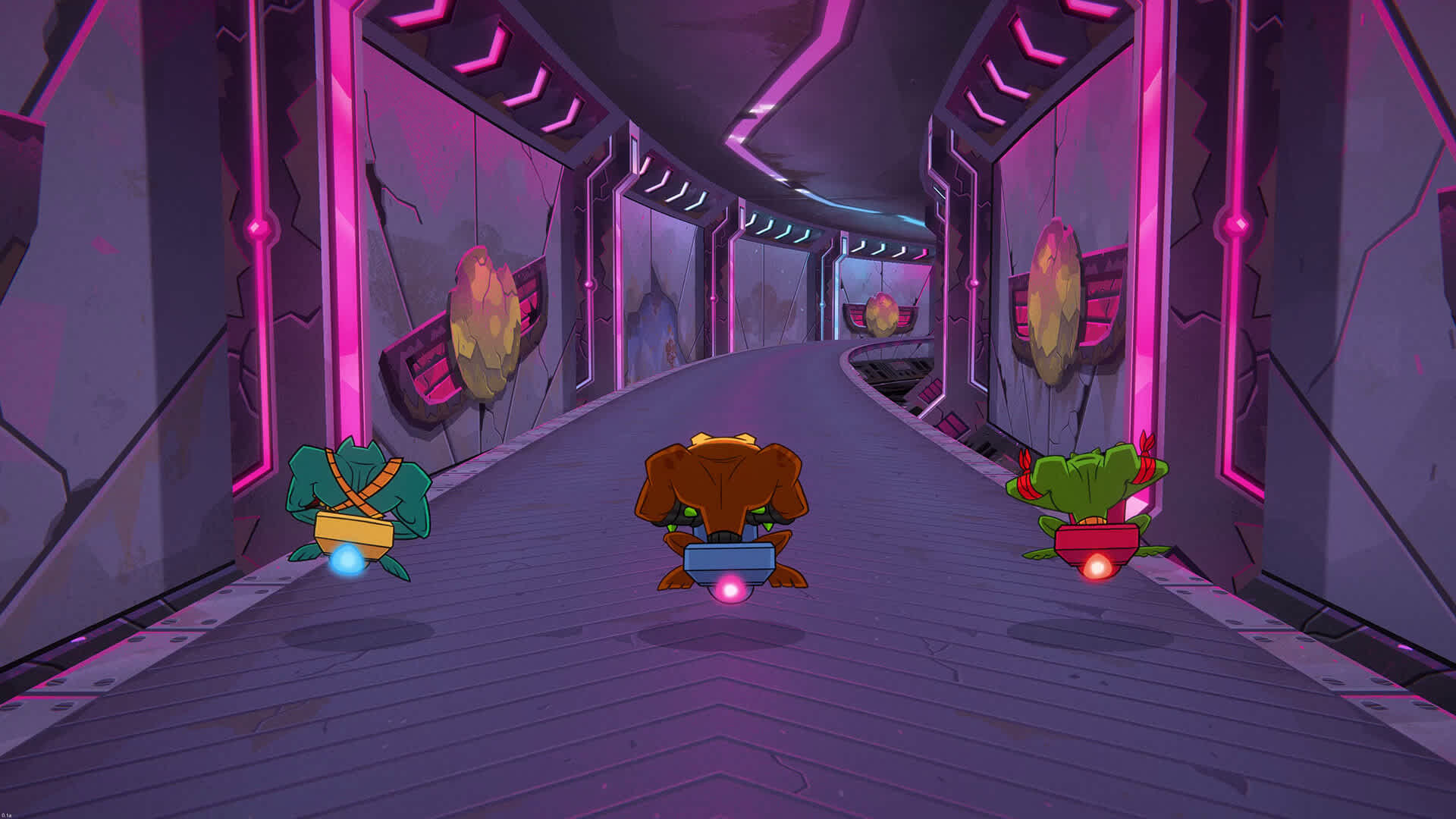 I only played in solo for my first run throughs. Some levels that shine with coop are obvious.

Playing solo, like I did, gives you the option to swap between the toads on the fly (get it?) in order to extend your combos and each toad has their own health bar which makes health management, on Normal difficulty and above, incredibly important. Whilst I played the game through solo, the expectation of co-op play is fairly obvious. The difficulty levels show you what makes them so difficult (enemy health, strength and respawn times are all affected) so it never feels unfair but the difficulty is such that only the most hardcore of solo players will succeed at the highest level. 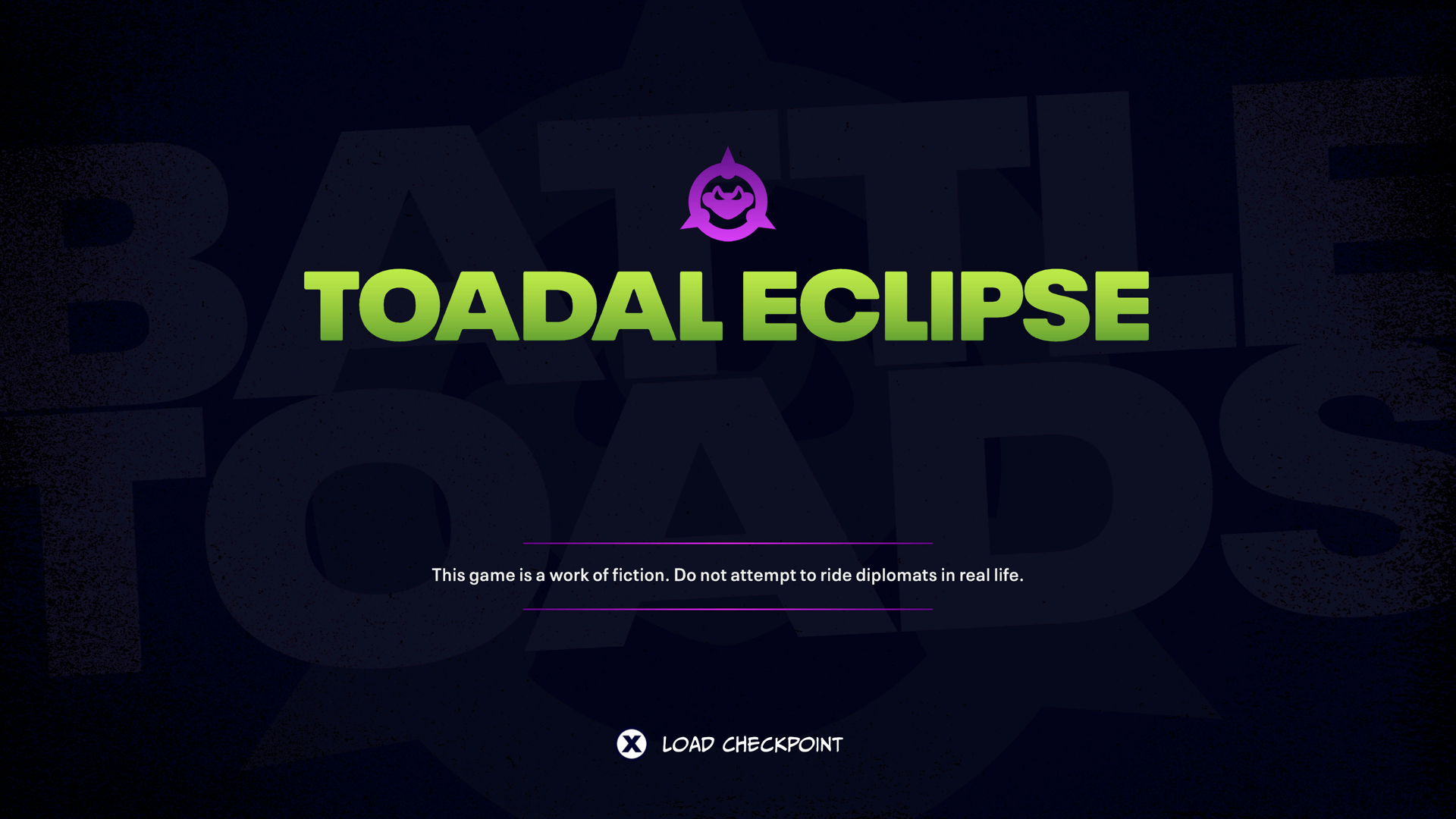 Even if you do die though, the death screens are amusing enough that it doesn’t feel like you’ve wasted anything.

What of the game itself though?

It is… difficult to describe and I’m going to have to settle for ‘hybrid’. It starts out as a beat ‘em up, during which you are encouraged to scour the background for hidden collectables and ways to progress, but changes genre a few times. It took almost four hours for me to beat the story (an hour of which is cutscene) and during that time I played a beat ‘em up, an infinite runner, a 2D platformer and a shoot ‘em up, all liberally sprinkled with minigames (largely consisting of quick-time events). 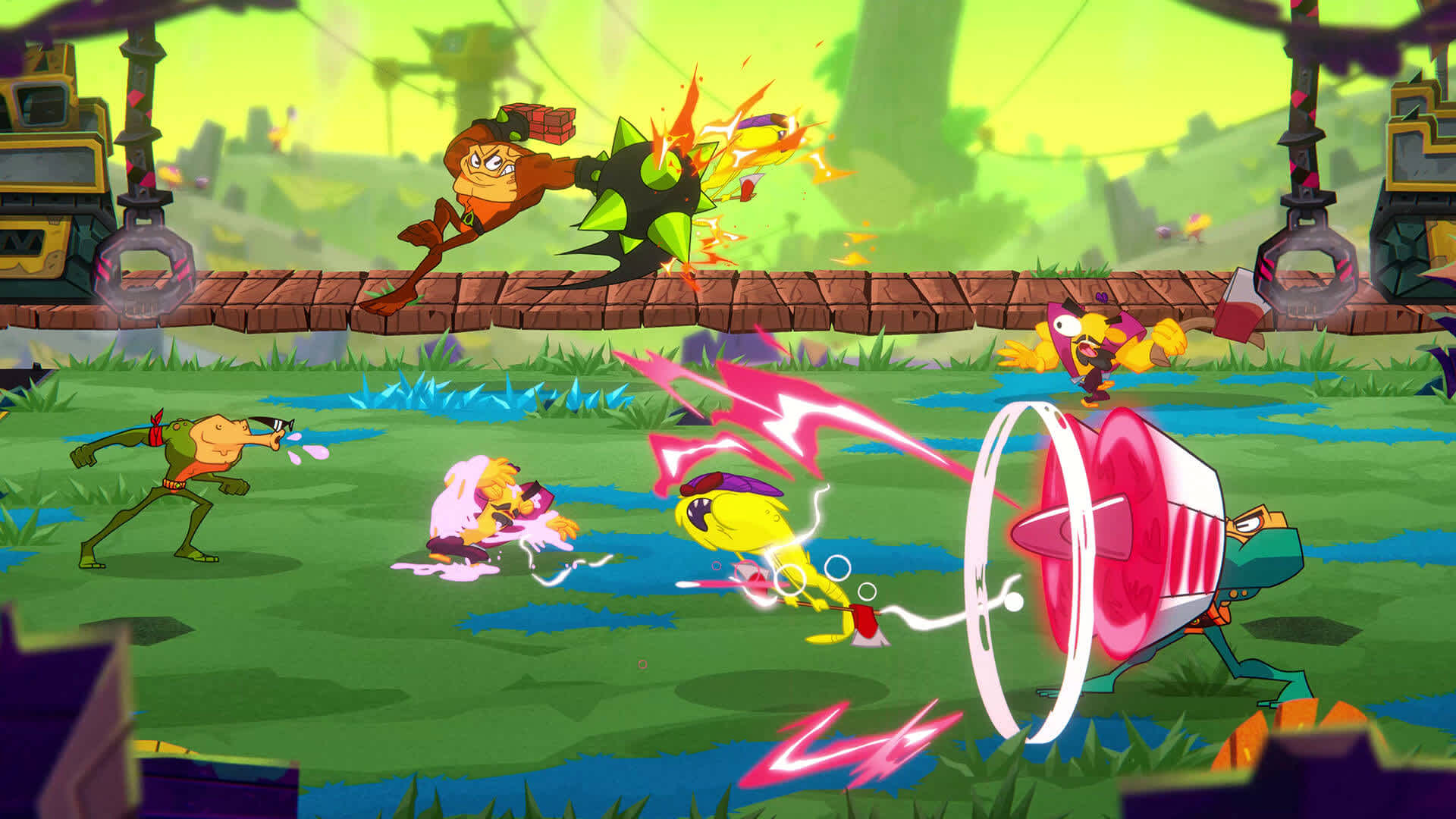 It strikes a good balance of gameplay styles and no one type of experience outstays its welcome; just be aware that you might stumble upon something you wouldn’t usually play. For me, it was the shoot ‘em up sections, but I know people who don’t really like 2D platformers and would be dismayed if I told them that no single game style lasts noticeably longer than the others (I’d hazard a guess that there is a slight bias towards the beat ‘em up section but it’s only slight) with the exception of the two ‘infinite’ running sequences which are very short. Each gameplay change is associated with a story beat, allowing one diverging plot thread to tell its own story without repeating the experiences of the other.

Whilst short, this selection of mini-games was one of my favourite parts of the game.

I was impressed with the sheer amount of variety the developers managed to cram into their game. Each toad plays differently (in terms of combos available, damage done and movement speed) and each of the many hand-drawn attack animations is crisp, easy to read and oh-so-satisfying to pull off (my personal favourites involve a fish and a rubber chicken).

The two running sections are very distinct; the first has a focus on matching the button prompt to the surface you are running on and the other features both a wall of death constantly following you as well as some puzzle elements. Even the shoot ‘em up sections distinguish themselves with different enemy types and bosses. Perhaps it would be worth thinking about Battletoads as a collection of small games linked with a cohesive, enjoyable story rather than a single game. 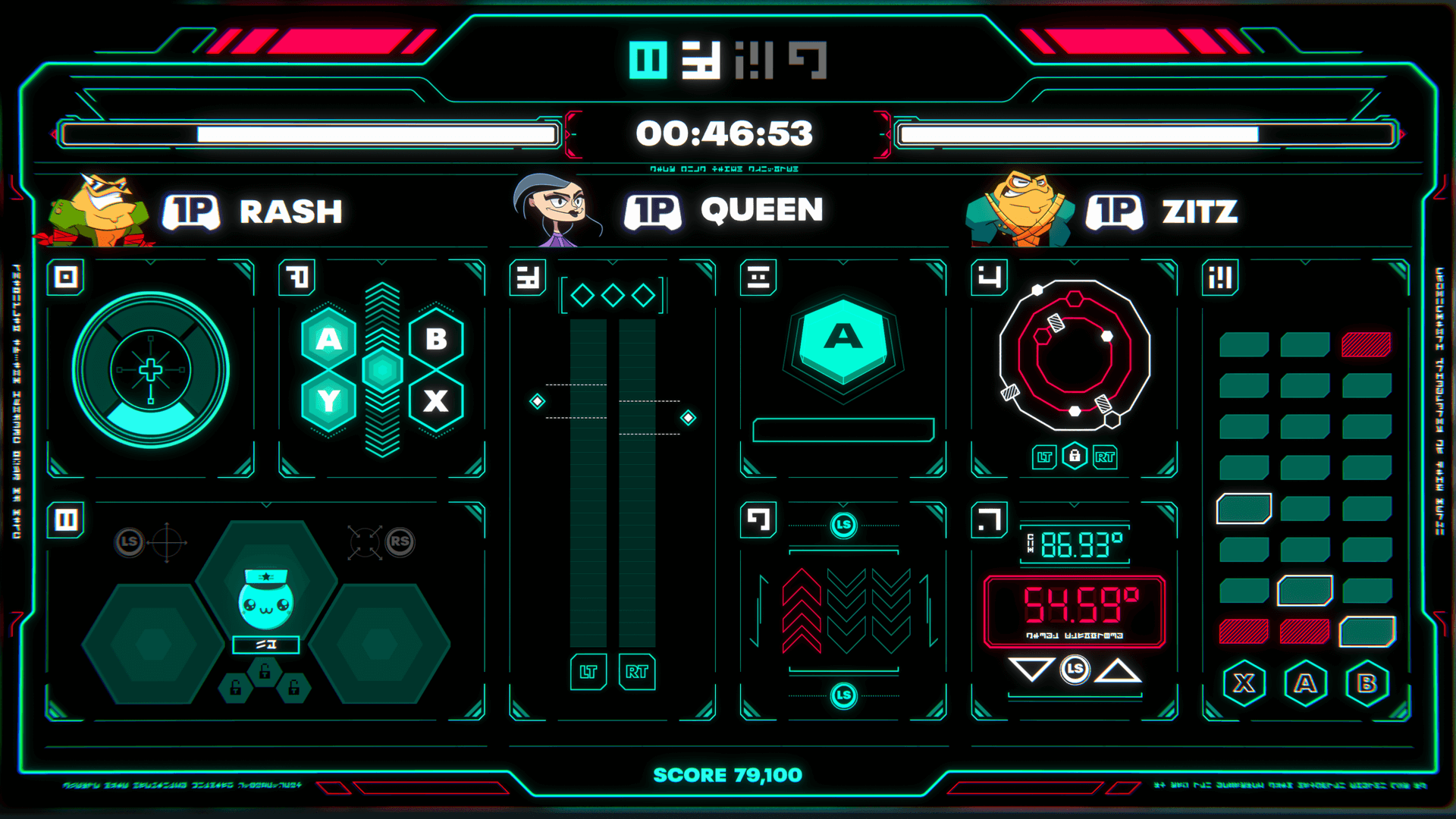 This feels like I should be playing with friends who have information I can’t see á la Keep Talking and Nobody Explodes.

That said, I had a few problems with some of the choices made: a handful of enemy types were annoying in that they either interrupted the flow of the game by blocking whenever they weren’t throwing things at me from the edges of the screen or had attacks that I lost amid everything else (this was more prevalent in the shoot ‘em sequences). I should also point out that, for people who are easily overstimulated visually, one of the early game bosses may present a problem in terms of parsing the information on screen.

The last niggle I had was standard platformer stuff: collectables hidden in what seem like death pits. This isn’t a new problem in gaming, and it won’t go away any time soon, just know that whilst most of the collectables are easy enough to find (shoot a background element, solve a puzzle, fly into the floating golden thing) you may have push up against every wall and try every pit in the platforming section. Thankfully, the checkpoint system works wonderfully. 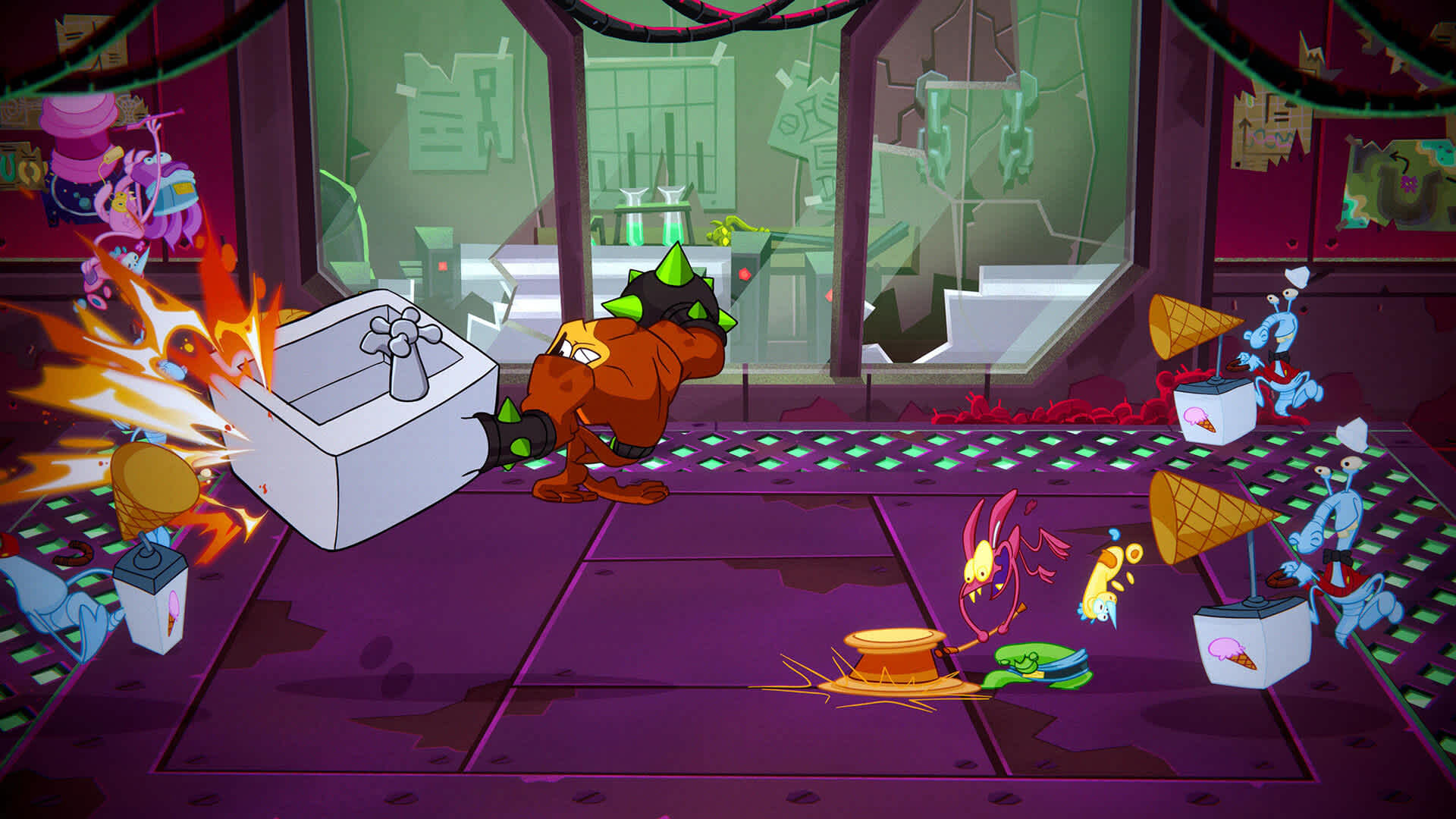 There is too much going on here for me to properly process.

Aside from that, there is little to say about the game play as its mostly genre-standard fare: the combos and health pickups the game opens with are replaced with weapon powerups and spike pits as it progresses. As lean as the game is though, it is polished (as I’ve mentioned); not once did I feel like I had died unfairly or encounter any noticeable bugs (aside from the flies you have to eat to restore the toads’ health).

This may, obviously, be attributed to its short length; at nearly four hours on Easy (as a newcomer to the genre [and a solo player], I was intimidated by the harder difficulties and my concern was warranted when I started again on Normal) the longevity here is mostly around replaying the game. Each level DOES have a handful of collectables plus a bonus objective to complete, as well as a score system, but if you aren’t driven by numbers you’re only going to be coming back to experience the enjoyable moment-to-moment gameplay if you have nothing else to do. 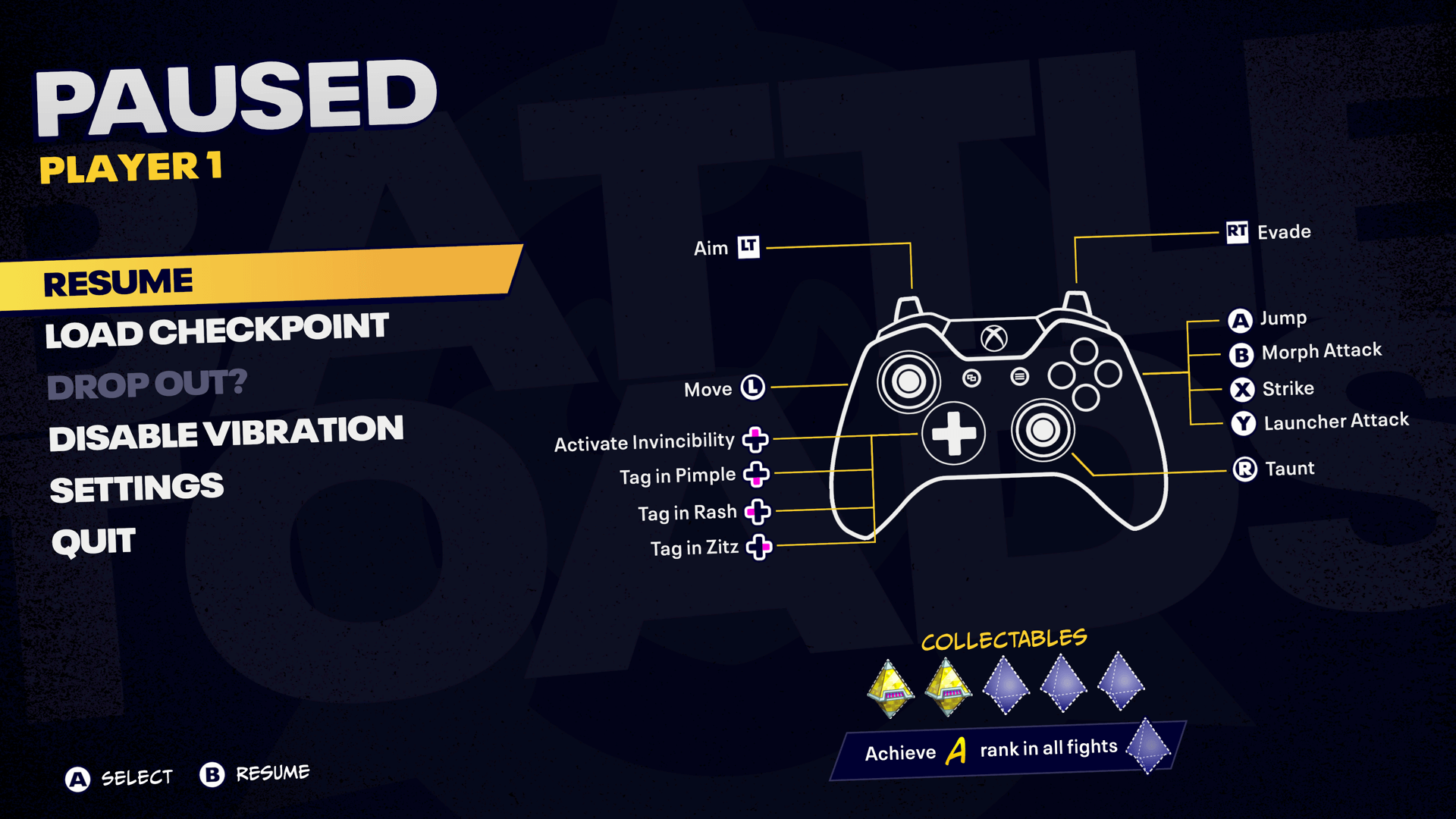 It’s easy enough to see what you’re missing on each level from the pause screen.

However, the game is only £14.99/$19.99 (at time of writing) and is available through Game Pass, which makes its short length suddenly seem more reasonable (as an aside, I’ve played similarly short games at this price point that have far more bugs in them) and I would be hard pressed to not recommend Battletoads. Please do bear in mind though, some of the humour here could be termed immature but is entertaining enough for the most part.

Really though, if you don’t care about short game experiences (or are at least interested in replaying the game) and immature humour, grab your partner, or partners, and enjoy the three-player couch co-op. You almost certainly won’t be disappointed!