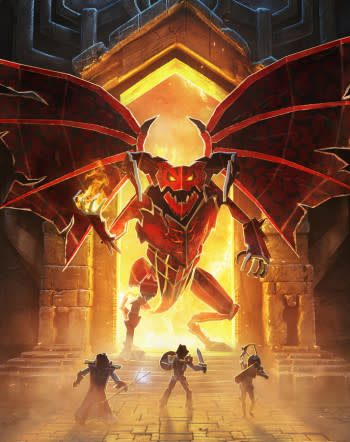 Book of Demons, Smarter than the Average ARPG

Recently out of early access (December 13th). Book of demons is an interesting take on the hack and slash genre, where equipment, spells and abilities come in the form of upgradable cards that you find as treasure as you progress through the game. This mix of deck building, hack and slash and roguelike elements gives Book of Demons its unique selling point.

The story sees yourself, a veteran adventurer, returning home to see it practically empty, and a mysterious evil lurking in the town cathedral. With no one else around, you see it as your duty to purge the cathedral and go deeper and deeper unearthing its secrets and of course getting loot along the way. 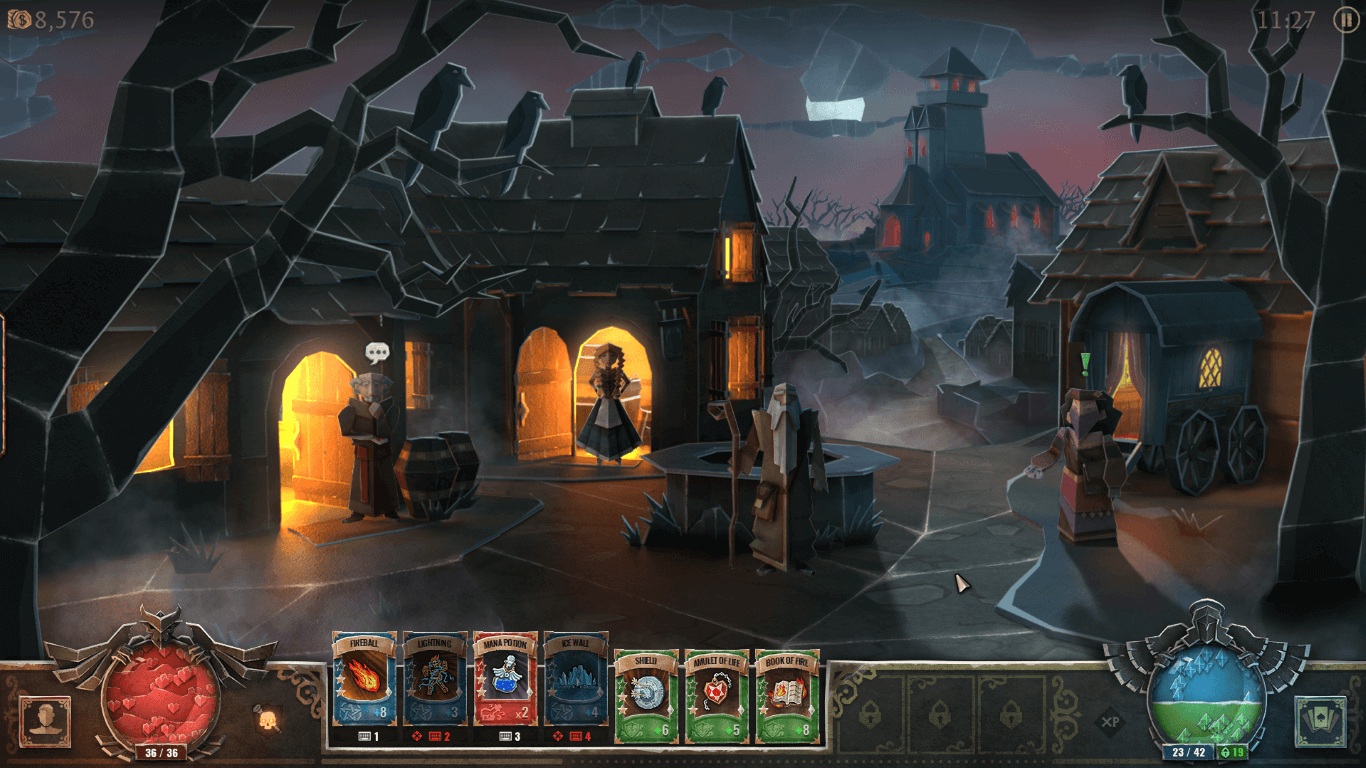 What lies within the abandoned cathedral? With only a few townsfolk around, you must venture forth to find out!

Book of demons is set in a paper world and all the story and action is inside the book. The graphics reflect this, and although simple in nature, really suit the setting of the game. I find the sprites very visually appealing, even with basic animations, it is not jarring. The tilesets are fairly detailed and interesting and it is quite easy to feel immersed in the game. Currently there are 3 quest zones each with their own enemies and tilesets, but would expect to see this expanded later with DLC or the like.

Effects such as being stunned, or frozen are also visually appealing. The entire screen changes depending on different status ailments that are affecting your character. The frozen effect makes the UI icey, being stunned activates a mini-game of mousing over stars to pull yourself together. Poison turns your health orb green and clicking it reduces the amount of damage you take from it. 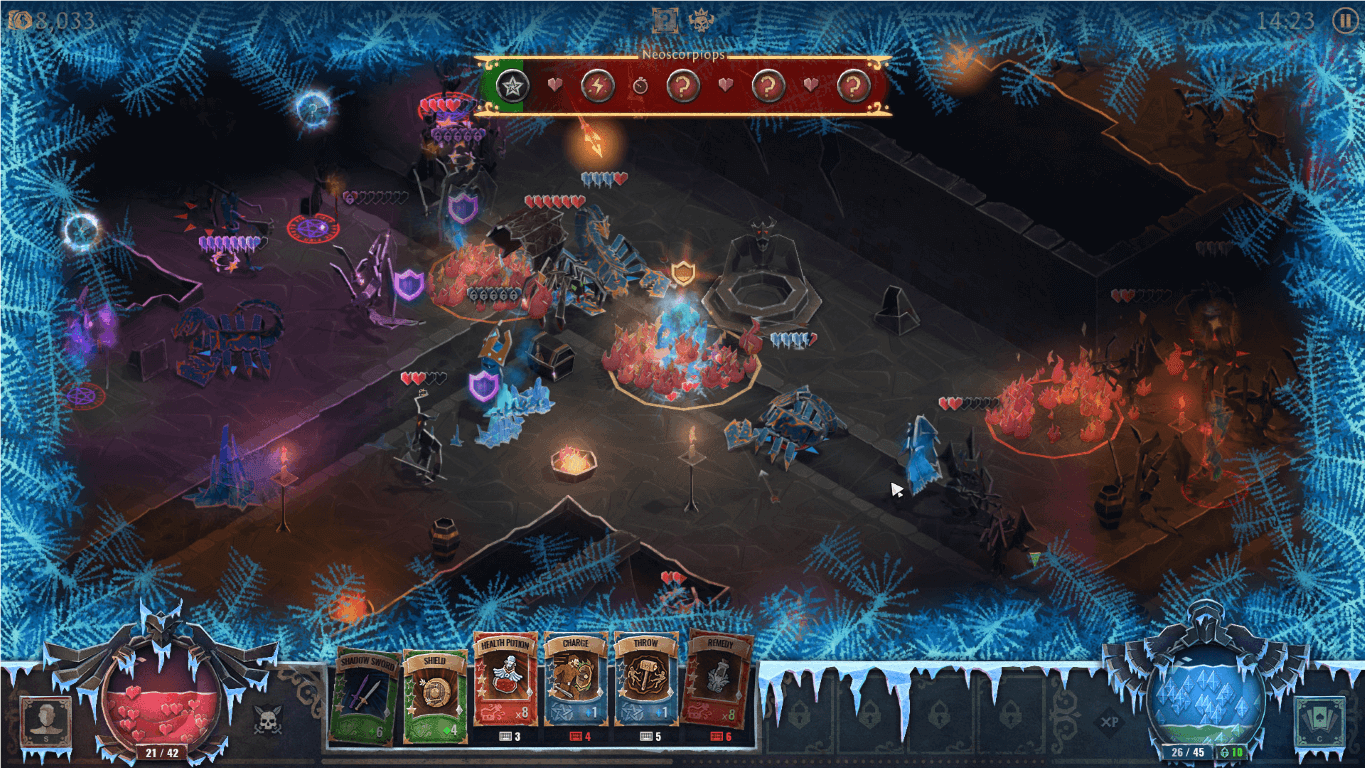 I feel like I am in an episode of Frozen! It is very pretty though.

Combat and movement is done entirely through the mouse and hotkeys, your character is essentially on a track and can’t be moved off it making movement sometimes feel restrictive and monsters have free movement, this isn’t necessarily a bad thing, and adds challenge to the game, as positioning becomes very important, as if you get surrounded on both sides you are unable to move and likely very much dead. Your character auto attacks very slowly which is helpful when moving. Assuming a monster is in range you character will do a basic attack, this is handy due to basic attacks also being bound to the mouse, and you aren’t completely defenseless.

Right clicking rapidly increases your attack rate and along with your socketed abilities and gear this brings an interesting dynamic of customization. Cards can be changed during encounters so you can personalize gear for different encounters and bosses depending on your situation. Mana is used both for spells and abilities as well as socketing equipment. Equipment reserves mana lowering your pool for use with other skills. This along with the different abilities of each class makes playing through on each individual class feel unique. Initially, you just start with the warrior, your traditional sword and board fighter. I often found myself equipping more gear and using my mana less, though some abilities were very useful situationally (one I used very often was a huge leap that allowed me to get away from packs). Later you unlock the ranger and mage classes, which again fit their traditional archetypes. In many ways, combat feels similar to ARPG combat such as Diablo or Path of Exile which I thoroughly enjoyed.

Going through the dungeon nets you experience which when you level gives you a slight damage increase and a choice of 2 options. Either gain a health point or gain a mana point. The one you don’t choose goes into a pot. The pot collects these points and other materials you gather on your journey and stores them. The more resources you have the greater the rewards in relation to the number of materials spent. Each time you empty the pot and collect the rewards the cost increases slightly making it more and more expensive each time, however dying whilst loot remains in the pot empties the pot completely. This adds a certain amount of risk/reward to your progression, do you collect the loot now or risk leaving it till later and dying. 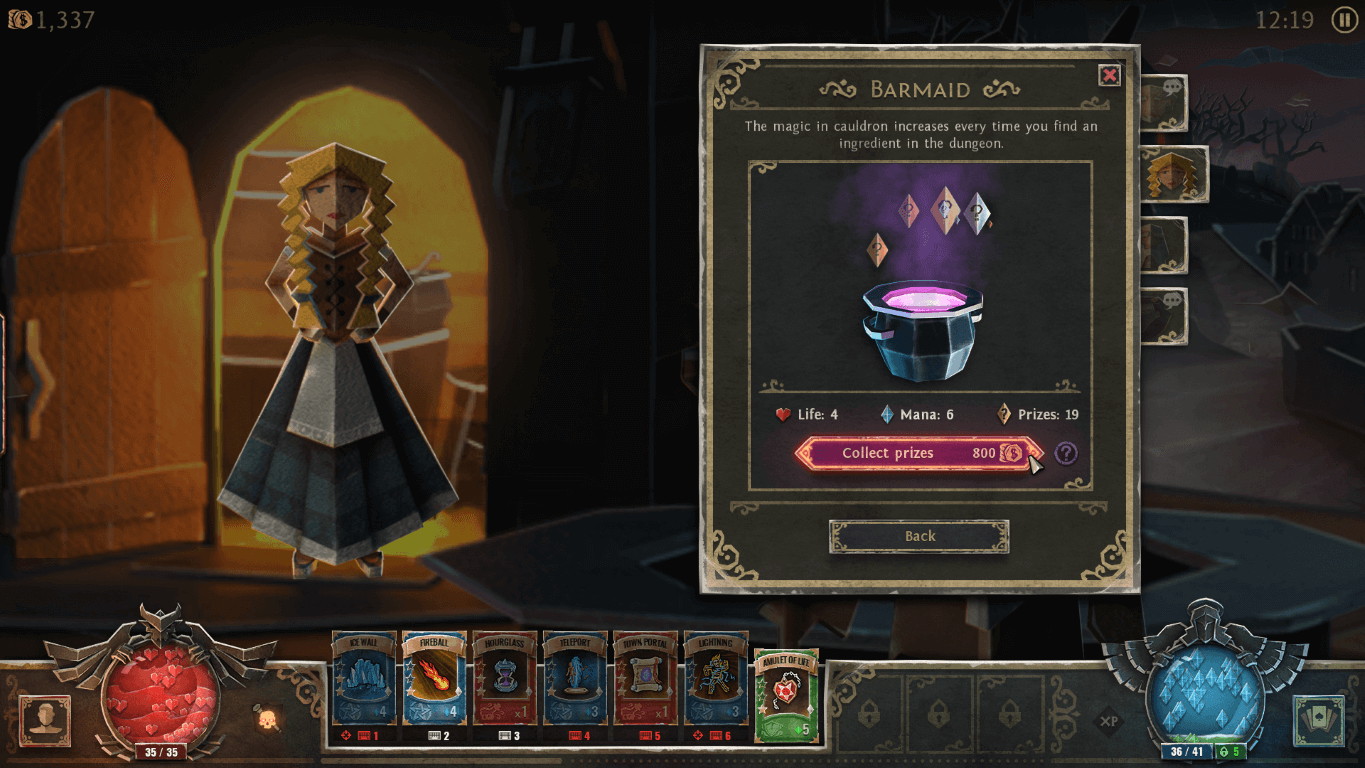 Should I collect my prizes now, or risk greater rewards?

Dying on normal gameplay drops your currently held cards on the floor and if you wish to recover them you must reenter with different cards to reclaim what was once yours.

Something that I did find very interesting was its flexible dungeon length. A game designed around the concept of “play when you can” allows you to adjust dungeon size to a play length adjustable to your schedule. Flexiscope learns your play style over time and predicts how long a dungeon will take you. Want a 15 mins break whilst revising for university exams? Sure! Stick in a small dungeon and have a couple rooms whilst you let your brain recharge. Want a gaming binge and have several hours to play? Sure! Play one of the larger dungeons and have an hour long dungeon crawl. I have often found myself playing this between other games when looking for something to do and it fits perfectly in whatever time you have available.

Flexiscope in action, giving me the choice of a quick tea break game, or an epic gaming marathon!

The game also has an endless mode once you have killed the final boss allowing you to continue playing through the procedurally generated dungeons for better loot, and has options to enable roguelike elements such as essentially perm-death. Although I am not a fan of hardcore modes, I do feel this is a good addition for fans of that playstyle. It certainly has a lot of replayability so starting from scratch doesn’t feel like a chore.

The game is fully voice acted, which was something I wasn’t expecting from the game, however the 4 NPCS in town do lack life, and found myself not really caring about what they had to say, skipping most of the dialog. The story is not especially strong and definitely feels second to the gameplay. Beyond go into cathedral, kill bad stuff, there isn’t much story, and couldn’t really tell you much else about it. Definitely one of the weaker aspects of the game, however I do feel a lot of hack and slash games do fall foul at this hurdle, so isn’t just an issue with Book of Demons.

All in all I have enjoyed my time playing Book of Demons. Those familiar with ARPG’s will find most of the controls intuitive and those who aren’t should be able to pick them up fairly quickly. The game is challenging and adaptive to your own playstyle, giving you an enjoyable experience no matter your skill level. With plenty of room for new DLC, such as new cards, classes, bosses and more I hope to see development on this game for the next while at least as I feel it definitely has room to grow. Currently priced £19.99 I definitely think it is worth the price.