Yesterday Firaxis announced via IGN the new XCOM 2 teaser trailer, and personally, we are stoked. XCom Enemy Unknown was one of the first games I played with my partner, almost like a game date. We'd play, plan, cheer over victories and lament over the losses. The trailer reveals that the aliens are in control of the Earth, and XCOM has gone underground to fight to overthrow their Advent government. This new guerrilla force

Project Reality was originally a BattleField 2 Modification. A game mode introducing serious teamwork, new play style and objective based missions. PR has gained a large crowd of fans and support over the last 10 years, and now the team have released update 35. For the first time, Project Reality is now standalone! With EA ceasing support of Battlefield 2 and removing it from online stores, the unavailability of the game has proven diffic

WildStar announced with a funky video that Free to Play is confirmed and set to land this fall. Offering people the usual free to play experience with varied limitations and in game purchases covering the cosmetic and convience options, WildStar will join the ranks of teetering on the edge of "Free-to-play or Pay-to-win" debates. Time will tell, but for a in-depth annoucement check out the news post covering all the comparsions be

Terraria have announced the arrival of a new patch coming June 30th and released this information in a cool little minecart adventure.  We took a bit of time aside to build a showcase for a little something that we knew the instant that we laid eyes on it was far too cool to not share. With this video  teaser we can see straight away that the Underworld has had a visual makeover, and the "Highway to Hell" certainly l

Witcher 3: Wild Hunt, by CD Projekt RED hit the charts in week one making it the biggest launch of the year so far, 2015. In fact, the launch was so good it trumped Battlefield Hardline week one sales by 53%.  While the launch of Witcher has been met with varying degrees of cheer or sneer with the whole Nvidia and AMD debate. Witcher 3 has been widely met with great cheer. Cheer, which is not echoed in its dark, and sick

Since Amazon purchased Twitch earlier this year, there has been rumours, speculation and questions who will next step up against the giant. It seems YouTube is finally edging into the arena. YouTube have announced their new 60fps live streaming. A few months ago, they release 60fps playback, and now the new HTML5 streaming allowing 720p60 and 1080p60, which means silky smooth playback for gaming and other fast-action videos. We know

In 2012, a browser game called Frog Fractions was released by developer Jim Crawford going by the name of Twinbeard.

The game features a frog sitting on a lilly pad and letting his tongue out to catch various mosquitoes and bugs in order to protect fruit positioned at the bottom of the screen. While it starts as your basic flash game it suddenly takes an unexpected twist, adding lazer lock on targeting, static aoe type attacks and flying dragons.. and I mean, I could tell you more but instead, just play it ;)

The game picked up a cult following as the game continued to surprise with twists and turns that change the mechanics, the game and leads to a crazy adventure. The game soon became an in joke and a huge hit, with a large crowd hankering for more. 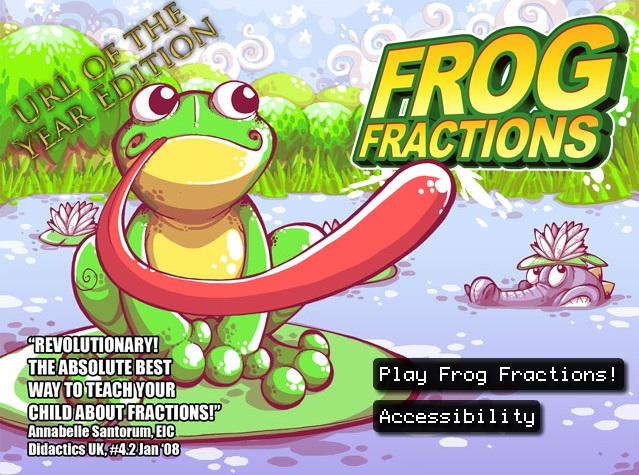 Twinbeard decided he would release Frog Fractions 2 with a Kickstarter and in an unusual, but in character, release he announced an ARG to discover the game.

In March 2014, a successful Kickstarter campaign of $70,000 Frog Fractions 2 was a go. However, there were a few caveats:

After 2 long years of an incredibly detailed search throughout 15 other Indie games, it has now been found in another Steam game called Glittermitten Grove.

The original conception can be quoted straight from Twinbeard himself:

You can check out the Kickstarter here and remember, backers can get the game from the Humble Bundle links now the "jig is up".

You can check out Glittermitten Grove here.

You can check out Frog Fractions here and I recommend you do, right now!