Frostpunked to my heart - Frostpunk Review 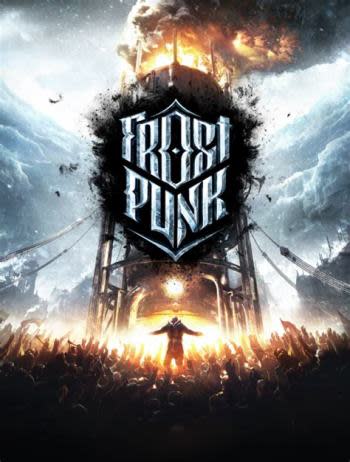 A Cold wind blows across the town.

80 stunted refugees stumble through the wind to the remains of what was their train that drove into the frosty winds God only knows where.

There before us, in a steampunkesque Dickensian world lies the world of FrostPunk. FrostPunk, where every small decision not a battle against your people, a battle to retain control, its against one thing, the cold, the ever pressing effervescent cold that surrounds you. The world has been destroyed in a post-apocalyptic wind that is colder than anything that has been seen before in the history of mankind, think the day after tomorrow but Victorian steampunk Day After Tomorrow.

In a nutshell, the game plays very similar to something like settlers crossed with The Banner Saga. 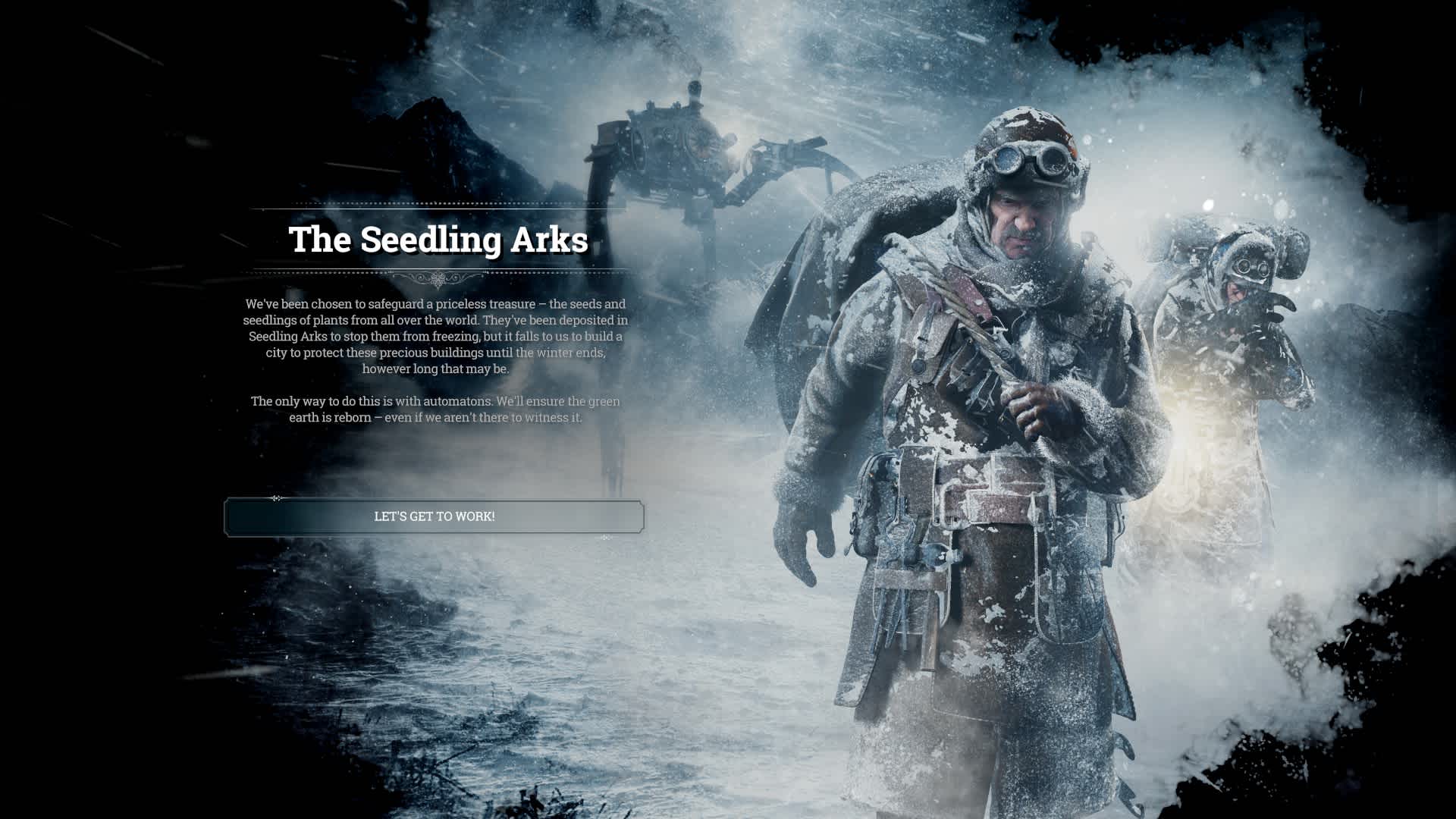 This makes for some very interesting decisions that the player must make.

The game that I couldn't put down (and that's saying something because games like this generally hold my attention for as long as me building my first Big Town) however I found myself staring at my screen for hours looking at the same thing. Looking at a ring, at the tower in the middle of my town, the tower that ensures that my people survive.

Just that tower the generator generates the heat from cold, and it must have fuel.

I say that again, it must have fuel, it must be fed, for without it everyone will die everyone you now know in this tiny encampment in a little crater somewhere in the North will die.

This leads to some extraordinary gameplay something that I didn't think I'd witness in a long time, I found myself looking at the same screen for 9 hours wanting and needing to know what the outcome of my people would be and how I could lead my people through the storm.

Whole civilizations have to live with in this crater, why? Because if you don't you won't be near the generator. 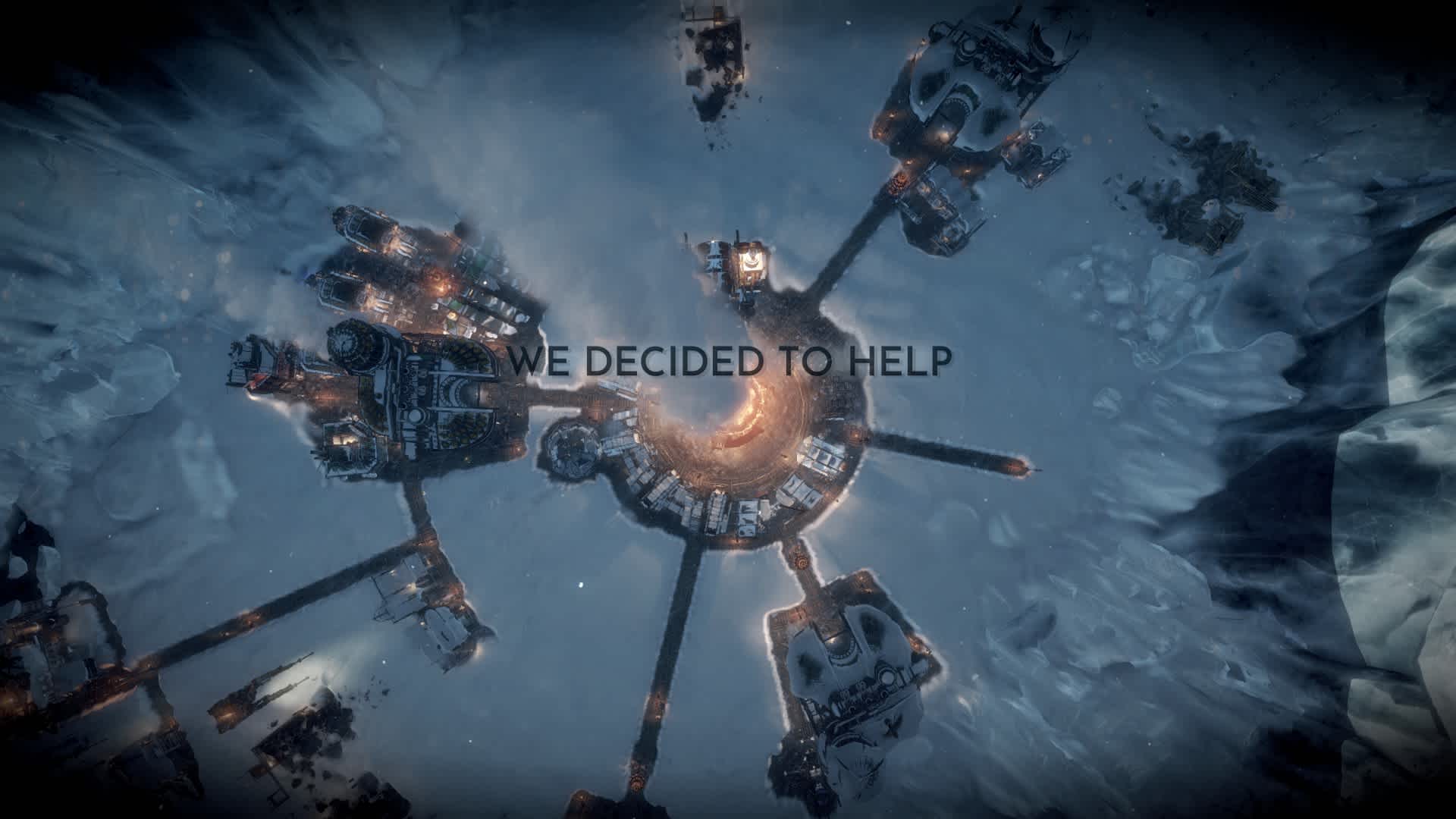 If you don't build your new houses out of steel, you'll have to find more coal for the generator.

This leads to some really interesting gameplay, this isn't just an economy game, this is an economy survival game, but this time it isn't like They Are Billions or another game of a similar vein, where you're building a big camp and having to keep aggresive people (or beings) out.

This isn't one of those economy micro games Warcraft 3 or Starcraft 2 where you have to build a little base and defend yourself against wave after wave of enemies.

No, there are no enemies in this game, the enemy in this game proves to be nothing more than the environment itself, which will kill you if you don't stay warm.

Which will kill you if you don't feed your people.

FrostPunk itself runs on a beautiful engine nicely made, there’s not really much to show, there about two screens you have to tab between the first screen is your crater which you will be looking at for hours at a time and be enthralled by the fact that you're looking at your crater for hours at a time, watching your little people go about their daily tasks watching the pleasant hum and clink of the generator while all the horrible cold is threatening to engulf you and kill everybody.

The graphics are pleasant and realistic they're not highly stylized but I would say there are they are a notch above the same sort of Steampunk theme that you could find in a game like Dishonored, in fact the Dishonored and steampunk universe in itself has really lent itself to this situation because rather than having High Technology, where perhaps now we would have electric generators and electricity where we would be able to constantly generate new sources of power, in this steampunk universe you have to burn coal, there's nothing else you can do but burn more coal, because there's no other way of generating heat than burning coal for your generator. 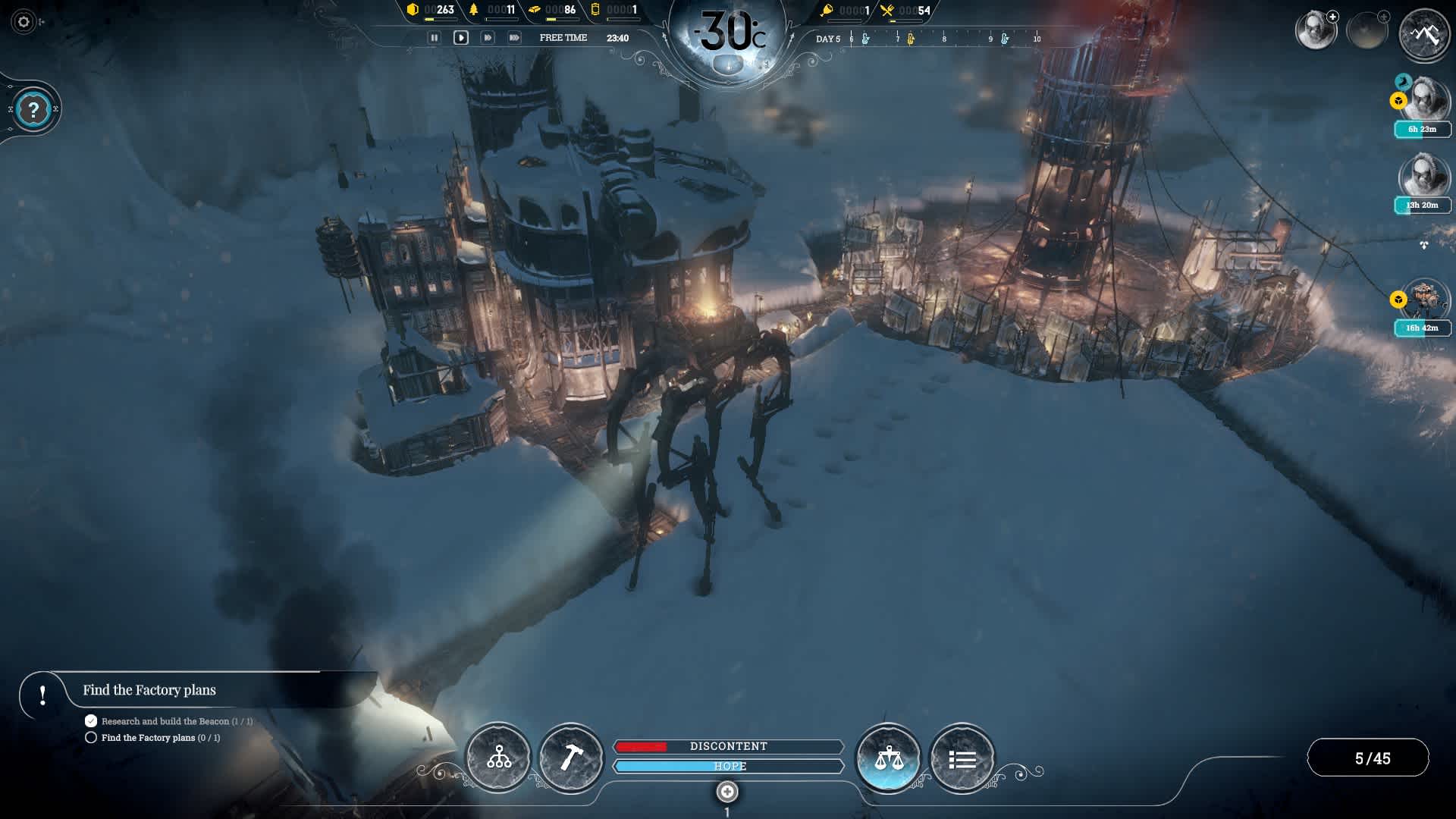 The game doesn't really go about explaining why there was a catastrophe or why the climate has dropped to Sub-Zero temperatures across the whole planet, and actually, it doesn't really need to, there are enough games that overly explain on indeed of films that overly explain the situation that people are placed in this game leaves it to your imagination, it leaves hints from time to time from scientists who you will find out in the frozen waste from the second screen which I referred to which is an overlay of your surrounding area,

Your surrounding area you won't be able to see because you don't have telescopic equipment good enough to see through the constant snow storms and blizzards.

The only thing you have connecting you to the outside world of your crater are two teams of scouts that you can train up and send to go away on little more or less event quests, the Scouts will take a period of time to reach the event and then the quest will be triggered, you will then have a series of options in which you can tell the Scouts to do,  some of the things might include the Scouts found an abandoned camp everyone, died but there's a bunch of wood coal and steel that the Scouts could take back with them if you want them to do.

Of course there are also other exotic things which this finds and of course the most important thing that you will need back to your camp, people.

There's almost a symbiosis with the generator in you and your people, it makes for a very interesting storyline which as I said in the first campaign, kept me enthralled for 9 hours.

I couldn't look away from my screen in fact I believe I took one break before I completed the campaign which at its conclusion was extremely stressful and difficult, and I can't believe I got through in a single playthrough, and I can't believe I got through without saving and loading the game at any point, all I did was I played it to its conclusion and my god do I feel like an economy game boss, being able to beat that campaign in one go, because by the end of it you feel like you've really accomplish something, after staring at your screen at the same warm little generator for 9 hours, that was a great campaign.

There's other content in the game other than the first campaign but, was the game worth the money just for that? Worth that just for those first nine hours? Absolutely, because I couldn't tear myself away from the screen it was an absolutely enthralling and well-built handcrafted and beautifully made game that was bug free and had little to be desired in additions.

The way you manage your economy is done simply and efficiently almost ruthlessly.

But within the context of the game it seems fine, these 100 people would not and could not survive without ruthless dictatorship of what they do every day, if you don't bring the 30 coal that we need to the generator today, the generator will go off, and then people will start getting ill, and when people get ill things get bad, because people stop working, and when people stop working because they're ill, nobody hunts for food and the generator doesn't get fed which means everyone goes cold and more people get ill. 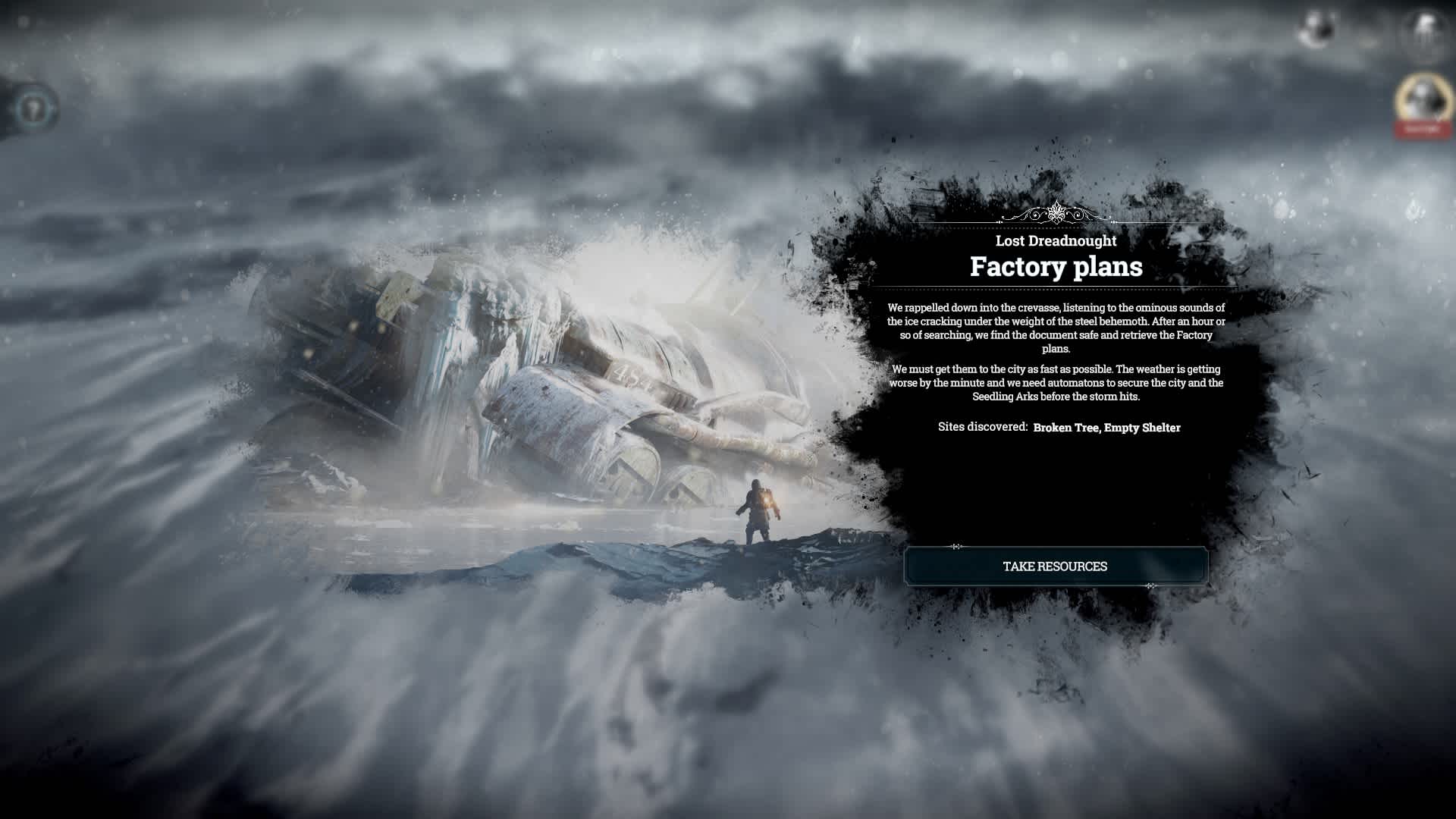 There’s this wonderful symbiosis at the heart of this game which I haven't really felt in other games before, people feed the generator, the generator feeds the people all for the sake of just keeping everybody alive. There's nothing else really to it, there's no greater enemy that you have to overcome, there's no secondary faction that you have to interact with, there's no one outside of your little bubble that you need to deal with, and when others come along, invite them in, share your precious few resources, or tell them to go away, there’s no consequence, so letting people in becomes the welcoming of a challenge, not the forcing of a challenge. How are you going to feed them? You don't have to, but the challenge is inviting enough.

This is pure symbiosis in-game form as a strategy game, without having to overcome another player or another opponent it's deeply referred there is no one else, you just have to stay alive, you have economy or we are going to die, and in fact it's different in that regard to other strategy games where you just have to stay alive, for example another economy management game the environment reaches a certain level of challenge that doesn't really go above that and then it starts throwing enemies at you.

For example there might be a very cold winter which will have to deal with and if you don't set up enough robust systems in order to deal with a cold winter in a different economy game where you might get a summer where you might be able to grow food your people will just continue happily ticking over the little economy train that you've made for them. In FrostPunk you don't have that luxury new line, things will get harder, the environment will get tougher, it will be a bigger problem to collect coal, it will get colder, it will get colder, and then it will get colder, and the challenges that await to keep the cold out to stop people from dying are significant but deeply rewarding as a game experience.

This has been one of the most fun strategy games I've played this year and honestly I've only just picked up Crusader Kings 2 which is destroying my time, but this game was really a real gem amongst a lot of strategy games which I felt little to say about recently.

This is a real time strategy game with elements of The Banner Saga and a few other classics mixed in like some of the later Settlers games.

If managing an economy in slightly different ways while trying to survive in a steampunk universe in a world that's threatening to freeze everyone to death sound good to you, you should definitely pick this up I heartily recommend it.