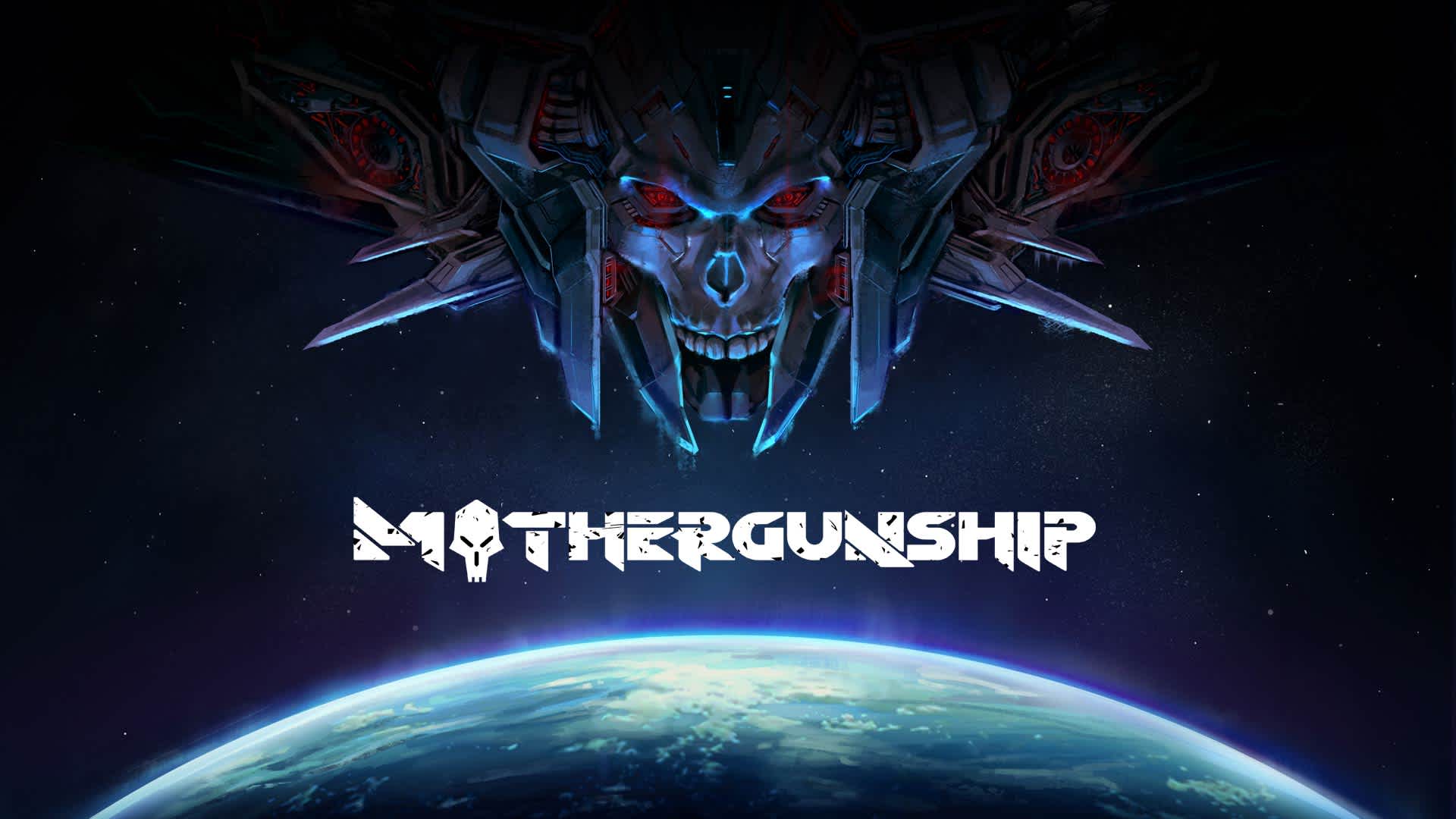 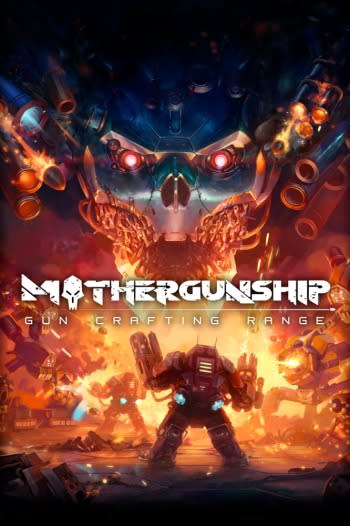 It’s fair to say that Mothergunship was not what I was expecting. So what went wrong?

I wanted to start this review off with something really simple; An analysis of gameplay cycles. That's probably the least simple thing that you can do when it comes to a video game, but I'm gonna try my best because I think that when it comes to modern gaming a lot of games regardless of the amount of effort that's been put in, really fall down when it comes to keeping a player engaged within what should be the most important part of any game: your core gameplay cycle 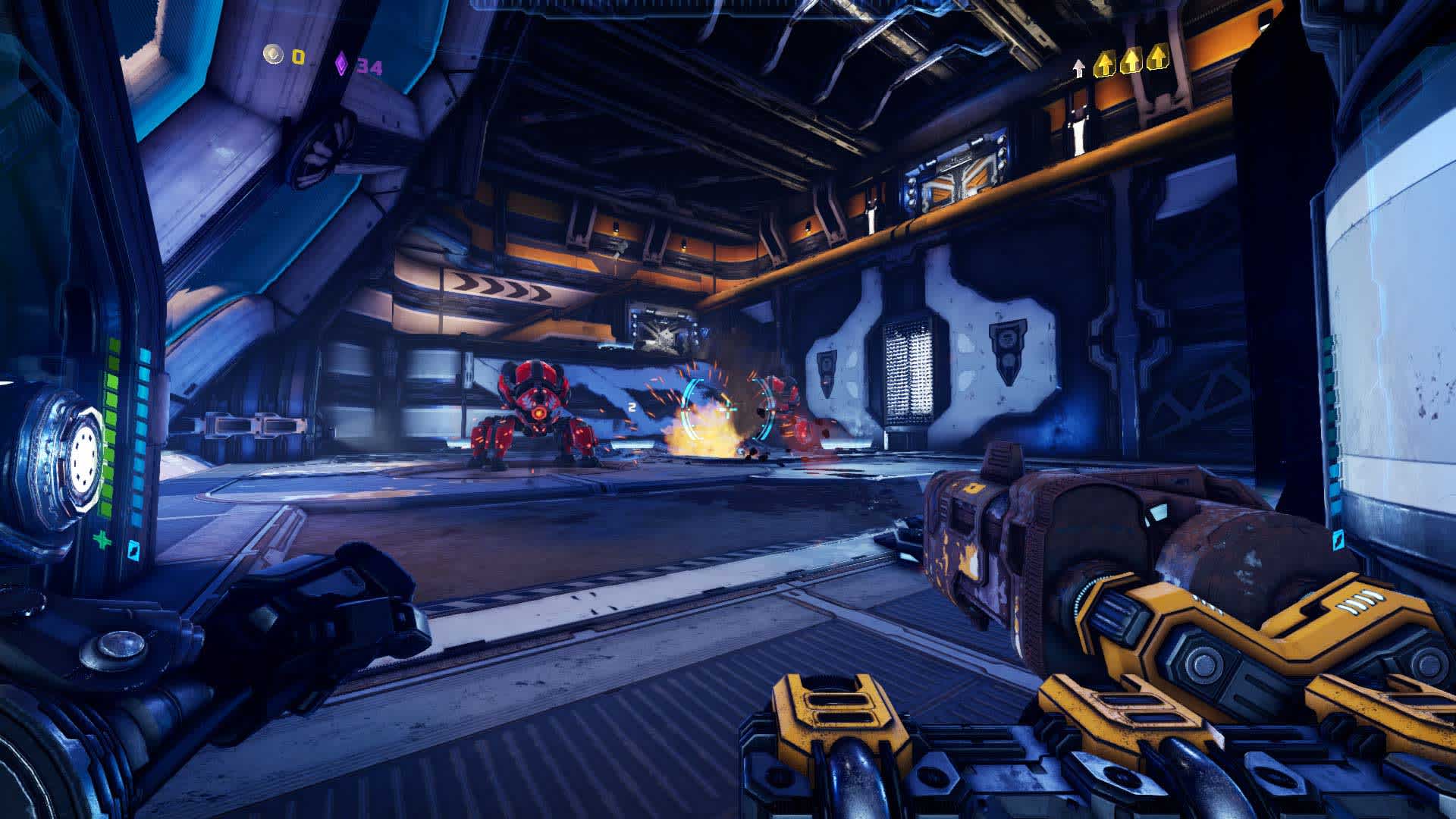 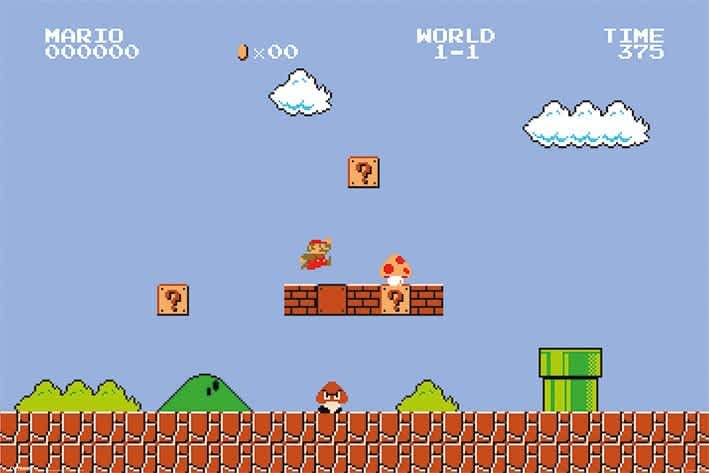 Now the bit that keeps you engaged is distractingly simple, it's the bit in the middle where you have to avoid all the obstacles. Now why is that important? Multiple reasons really, but there's a really simple explanation behind why the “in the middle where all the detail is” part which is avoiding the obstacles to get to the end, is the most important part; because it's the part you spend most of your time, and in a video game the part where you spend most of your time has to be the part where you have all the fun. And if not all the fun, then 95% of the fun!

So we can boil core gameplay cycles down to this: If I have to keep doing something repetitively, is the action I'm completing fun?

If the action isn't fun, you don't have a good core gameplay cycle. 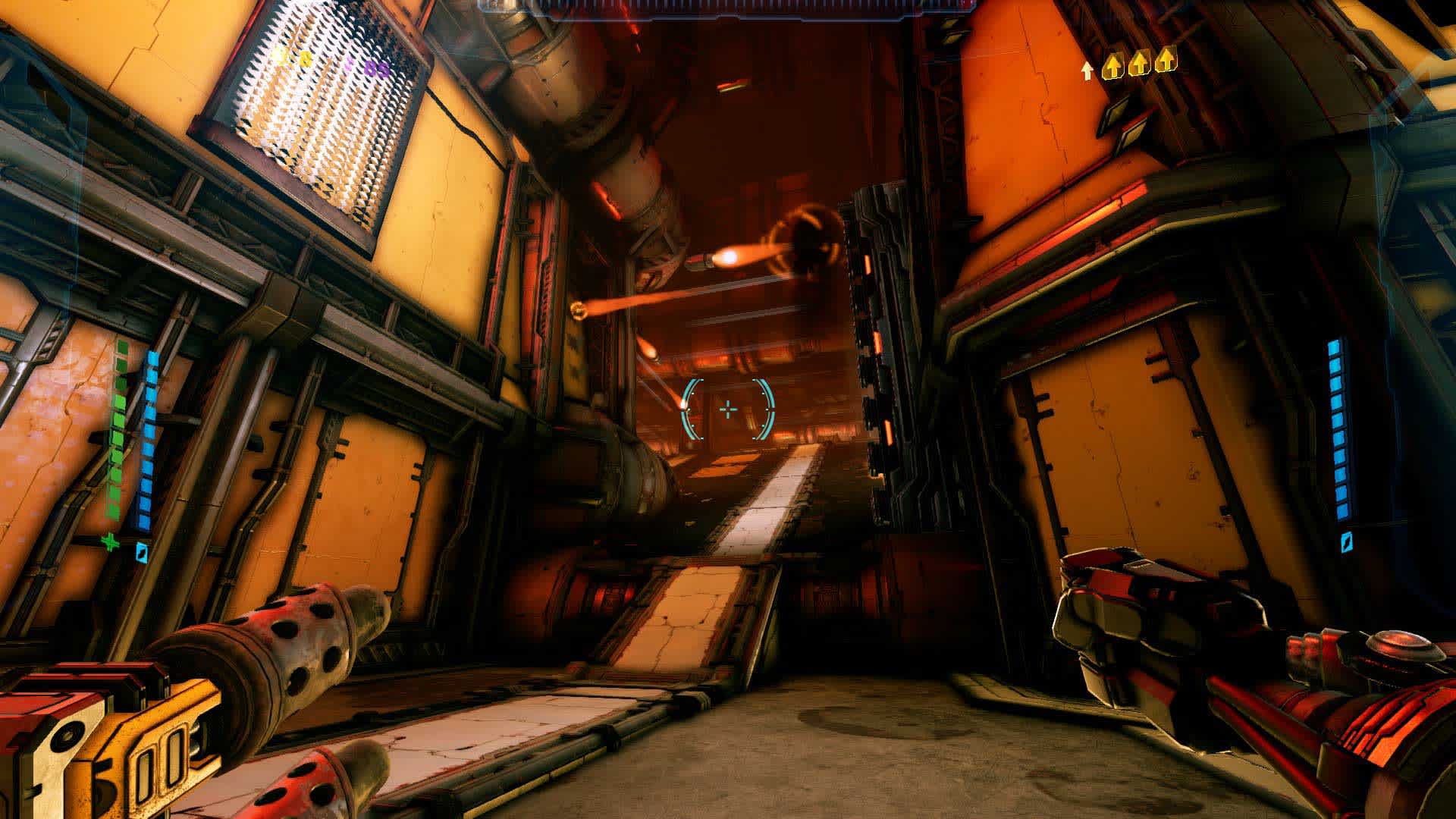 So let's move on to Mothergunship let's start with a really simple example, the first thing Mothergunship wants you to do is build a gun, it's part of their core gameplay mechanics – this is different from the cycle of course but it’s a cool mechanic, it’s worth mentioning. You build a great big gun and you shoot a lot of stuff. The action ramps up quickly and the difficulty ramps up in turn so there is more stuff to shoot but you will have larger guns therefore the difficulty should be relatively linear as it increases. Shoot all the stuff, moveon to next area - mainly.

And for sure the first two levels I played of Mothergunship were fun. But an area in a level on Mothergunship is about 60 seconds sometimes which will you get onto a new area. The exploration which is another core gameplay mechanic in many FPS therefore is also extremely boring. Because levels look pretty much the same, pretty nut and bolt standard, pretty damn boring to put it in plain old English.

However, the difficulty on Mothergunship is not a linear experience at all, while this may be fun in games with core gameplay cycles that are really fun to play like Super Mario, in a game where the linear suddenly jumps up to nonlinear levels of cliff like proportions it makes progressing in the game absolutely grinding.

So you've got your great big gun that you've made and enter an area that you walk into through a very brief piece of story exposition with your typical characters, and I call them typical first because they don't have names, they have names like "The General" for example, who to be fair to the voice actor behind him is giving his best Cave Johnson impression ever. But there's just something a little soulless about the whole experience, while it does it's best to regale you with in jokes with your computers sometimes getting infected by “space spam” which is for the moment quite amusing from time to time, there’s just something about this game I can't put my finger on . 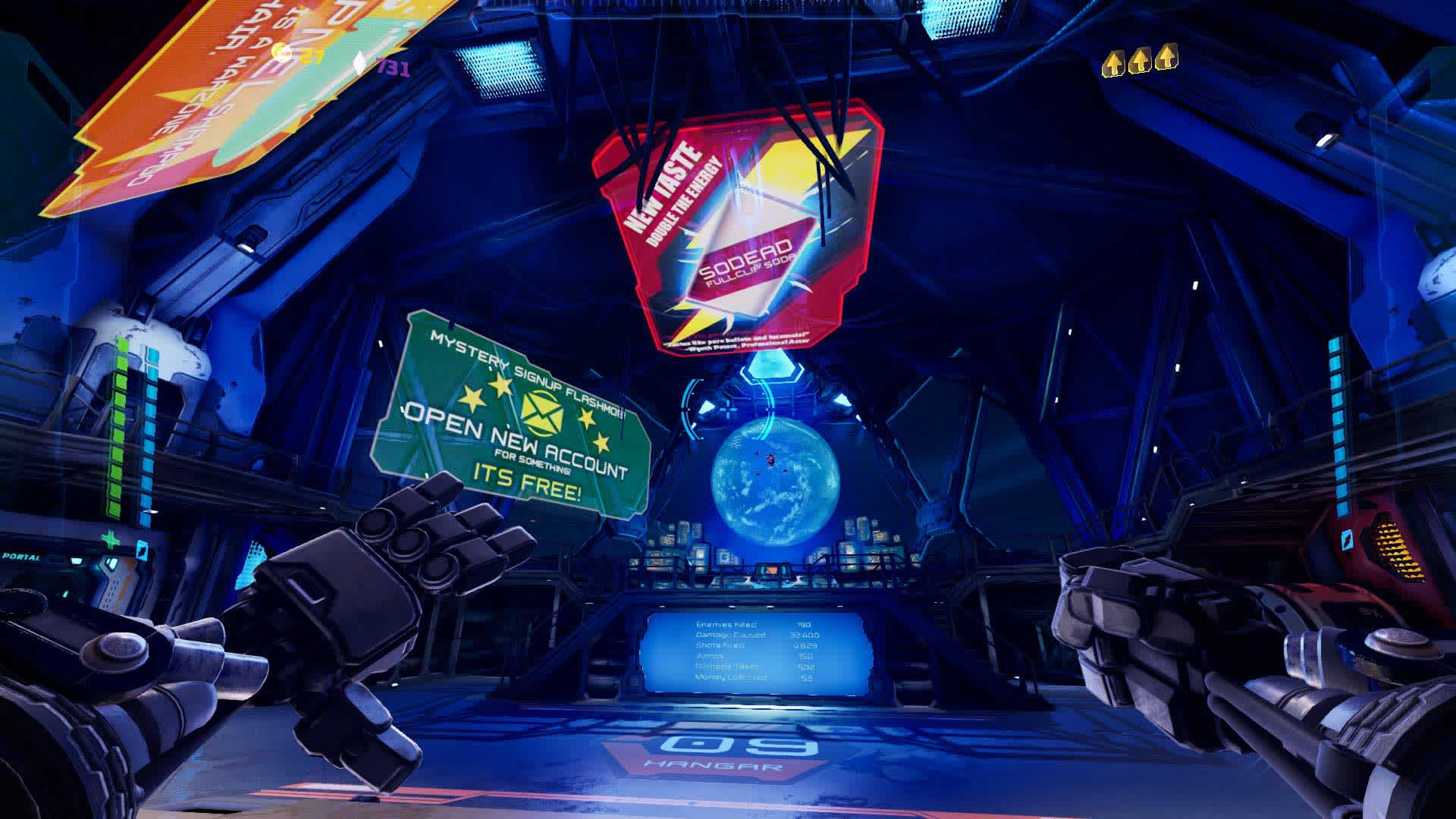 I think in reality there are a lot of games where I have allowed story elements to slide because the gameplay has just been stellar; those experiences stay with you for a long time. This game isn't one of them, because quite frankly the core gameplay cycle is really really boring.

Build a gun bigger than any gun you've ever built before which is a fun mechanic in a first person shooter and I did enjoy that - for about 5 minutes - until it became overwhelmingly obvious that building a gun that I want to build on every level won't be possible, because you're not given the full range of mechanics, weapons attachments and connectors that you were given in the previous level in every new level.

This leads to some really boring levels, where you're given really crappy guns that you have to bolt together into really crappy ways, but sometimes you can't even bolt them together because you're not given enough connectors which means firing at the stupid enemies in level before where you had let's say 4 blasters that fire in nice linear paths towards your targets, and do extreme amounts of damage.

However, there were some levels where you're given basically enemies floating en masse around the screen, filling your fucking screen with enemies, absolutely swarming with things to kill, flying around in the air coming at you, from underneath and above with Super Mario Bullet Bills (which is the only way I can describe them) shoving your screen with crap, while at the same time having to avoid all of this stuff, shoot your underwhelming underpowered slow performing guns that have an energy bar (by the way) and sometimes without particular energy-efficiency attachments you're not given automatically, you will be waiting half the time for your weapons to recharge and shooting the other half of the time. 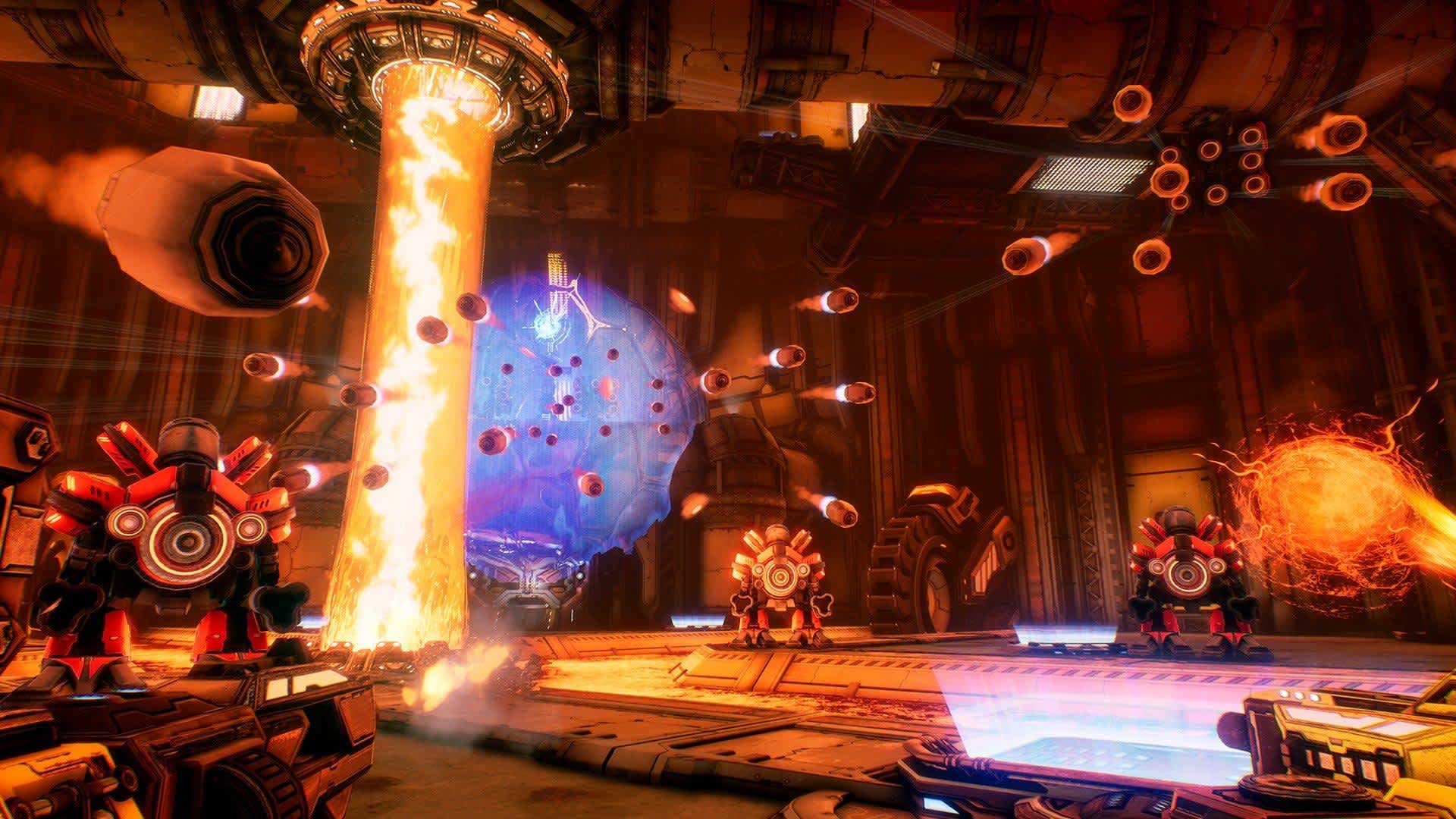 This leads to a feeling of absolute frustration when all you want to be doing is returning in kind the clusterfuck of bullets that are coming towards you at any one time but instead you are left with a wilting excuse for a weapon which sometimes you're not even given in your other hand, the hand which can also shoot and build weapons from but is 90% of the time empty because you need to have your main hand weapon as overpowered as you can possibly get it get through a simple level without dying from the cacophony of crap being fired at you.

Suffice to say in a nutshell the lack of credible storyline that I find interesting, the exposition of constant jokes are in themselves amusing but taken as a whole can just be read as filler, this leads to a sense of complete detachment from the whole game.

Mothergunship’s only interesting feature is the fact that you're building a motherfucker of a gun, and perhaps if they'd had some larger environments for example like Serious Sam, this would work amazingly. Serious Sam gets this very very right, Painkiller is another great example, large open form massive environments with large numbers of, to begin with, low challenging enemies for you to deal with and then steadily ranking up the difficulty as you're introduced to larger and larger weapons and as your skill level increases and you become familiar with the game. The last great example of an indie game that you should definitely pick up instead of this one if you want an interesting linearly progressive first person shooter loaded full of enemies on screen for you to kill and high paced action is Dusk. I played this badboy through on 1 shot 1 kill mode, and it was still just possible, but damn it was fun, even if I did die 100 times per level in the process, you just instantly started again, which made dying part of the learning process rather than a hassle + a loading screen.

Dying in Mothergunship and being booted out to the menu screen every single time you die – Which is the worse indignity of it all to be honest, is one of the most frustrating experiences I’ve had in an FPS in a long time. 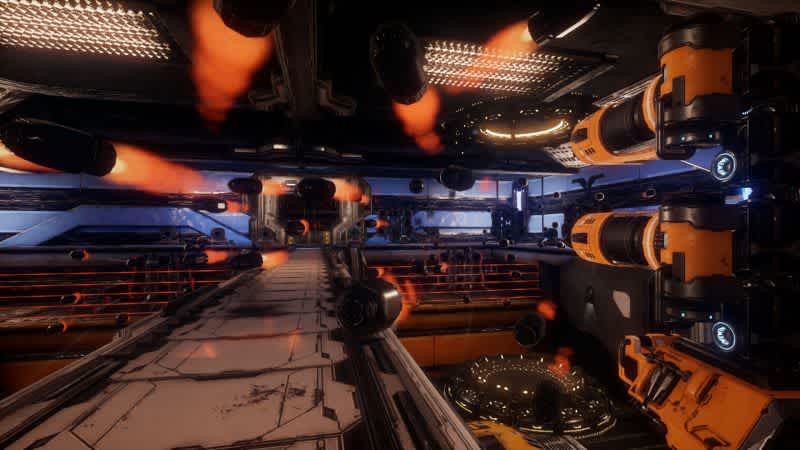 "You will die, and you will suffer the loading screen, I have foreseen it - EuhuhHAHAHAAH" - Palpatine no doubt

What happens if I died in Dusk? The level restarts, try again. 0 loading involved. No clicking, no stupid score screen telling me how I died with some snarky comment like:

“Never mind recruit, we didn’t think we’d see you dying so often, but then again we had high hopes for you when you joined! Not really, your IQ is lower than the average bison’s after all, but try again!” (I wrote that one lol) ad infinitum.

So I have to leave this review with one thing, I applaud the developers for a really interesting mechanic around building great big guns, bolting them all together and making guns that feel genuinely interesting to fire and play with - when you've got the pieces to make them, which is basically never - however the feeling of randomness connected with the pieces of guns that you collect, and the overwhelmingly boring environments and enemies that you have to slog through in order to progress (Honestly levels out of the 1990s were better), simply leaves this game feeling in a really simple term, boring.